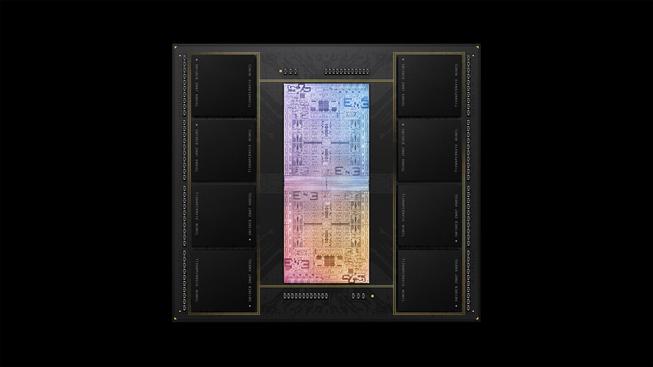 Apple has just unveiled its flagship M1 SOC, the M1 Ultra, and provided some impressive metrics in regards to its CPU & GPU performance.

The Apple M1 Ultra SOC is the combination of two M1 Max chips using the brand new Apple UltraFusion architecture. The Ultra SOC still utilizes the 5nm process node but the doubling provides up to 114 Billion transistors on the same package. The new UltraFusion architecture delivers up to 2.5 TB/s of low-latency interprocessor bandwidth and 800 GB/s of fast memory bandwidth. The interconnect architecture features more than 10,000 signals between the two chips.

The GPU also gets a huge bump with a 64-core unit that offers 8192 execution units for up to 21 TFLOPs of single-precision horsepower, 660 GTexels/s, and 330 GPixels/s. The media engine on the Apple M1 Ultra is composed of the latest Hardware-accelerated H.264, HEVC, ProRes & ProRes with 2 video decode engines, 4 videos encode engines and 4 ProRes encode/decode engines. The GPU is getting access to 128 GB of unified memory.

iPhone SE vs Galaxy A33 5G – Clash of the Mid Rangers

The same is true for the GPU which offers the same performance as the NVIDIA GeForce RTX 3060 Ti at 1/3rd the power and similar performance to NVIDIA's flagship GeForce RTX 3090 graphics card while sipping in 200W less power. Apple also showed comparative numbers against the Radeon Pro W6900X on their existing Mac Pro solutions. The Mac Studio with M1 Ultra SOC offers up to 80% faster performance than the Radeon Pro solution.