Disney, Marvel and Imax are making 13 Marvel movies available in Imax Enhanced starting on November 12 - the same day as the company's Disney Plus Day event.

According to Disney, 13 films from the Marvel movie catalogue will be available in a 1.90:1 aspect ratio that’s taller than traditional 16:9 and will include DTS audio.

You’ll also see them in Dolby Vision HDR for better contrast and color saturation, too, as long as you have a TV that supports the format Here’s what you need to watch Imax Enhanced films. 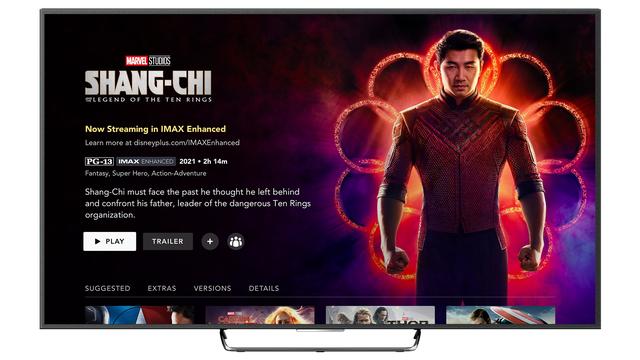 Among the films getting the Imax Enhanced treatment are Iron Man, Guardians of the Galaxy, Guardians of the Galaxy Vol. 2, Captain America: Civil War, Doctor Strange, Thor: Ragnarok, Black Panther, Avengers: Infinity War, Ant-Man and The Wasp, Captain Marvel, Avengers: Endgame, and Black Widow, along with Shang-Chi and The Legend of The Ten Rings that drops on November 12.

Here’s what you need to watch Imax Enhanced films

Nothing. Seriously. According to a blog posted on Marvel's website, all TVs that can access Disney Plus are capable of receiving Imax Enhanced.

The way it works is that the TV will display the taller aspect ratio for most of the film, but might switch to 16:9 occasionally for shots that weren’t made for Imax.

You won’t be watching the films in Dolby Vision or hearing the DTS audio if you don’t have a setup that supports those formats, but the aspect ratio should work regardless of which TV or sound system you use.

As of now it sounds like the format will be a permanent fixture on Disney’s streaming service and we’ll be on the lookout for more content to come in the next few months and years as more movies get added to the service.