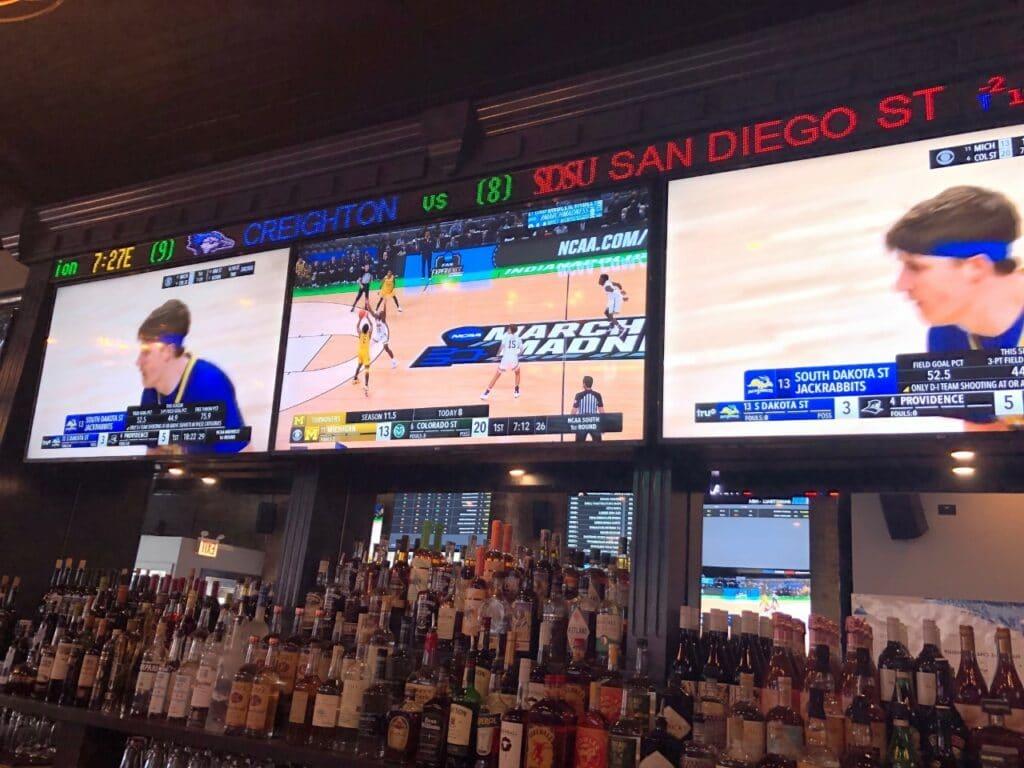 After the concentration of March Madness last year in Indiana with all of the COVID concerns, the excitement of a regular NCAA Tournament — games being held across the country, people getting together to cheer on their favorite alma maters — was anticipated from the moment the brackets were announced. It also helped that three of the First Four games were entertaining matchups, capped by Notre Dame outlasting Rutgers in double overtime.

Chicago is a prime city for sports fans in general, but it stands out for college sports. Many alumni of Big Ten schools, as well as other colleges in the region, wind up settling in the area post-graduation. Various bars focus on specific schools’ fan bases for game viewing, and their alums turn out in droves. With eight Big Ten teams left after the Scarlet Knights’ loss and with the state’s top program, Illinois, a No. 4 seed, the four days spanning the first two rounds figured to be frenetic and, hopefully, fun-filled.

Thursday brought the best calendar double when it comes to the NCAA Tournament, in that the opening day of the round of 64 fell on St. Patrick’s Day. Chicago does St. Patty’s Day big — it annually dyes the Chicago River green the weekend before, unofficially kicking off a week of good cheer and occasional overindulgence. The city ended its mask mandate related to COVID-19 at the end of February, another small step to normalcy that also offered a chance for bars and restaurants to pick up business.

What follows are one reporter’s sights and sounds experienced Thursday on the north side of Chicago.

In a nod to St. Patrick’s Day, the morning started with the breakfast of champions, a “Dublin Handshake” of Guinness and Jameson. For the record, my 49-year-old liver occasionally loathes my 25-year-old enthusiasm.

The Over/Under has quickly become a go-to place for sports fans in Lakeview, specifically sports bettors. Upon my arrival, Over/Under was filling quickly, drawing extra attention from the local late-morning ESPN Radio show Carmen and Jurko setting up shop in the front of the bar.

Co-host Carmen DeFalco summed up the eager vibe. “Seeing [Charles] Barkley on the screen makes it real,” he said while the pre-game studio analysis could be heard underneath the radio show.

Owner Ed Berry had previously mentioned being in talks with various mobile sportsbook operators for potential affiliate partnerships. The first clue Berry had found one was by the lack of rotating odds on the large television screens throughout the establishment. The second was the brand identifier in the lower right corner of the screen — Over/Under, it turns out, is now a partner of FanDuel.

Thursday marked Over/Under’s first big event since the two parties reached agreement, and Berry talked about how to further enhance his place with more screens and some thematic elements. He remains big on the potential for customers to compete with their picks at the bar, and he noted there would be space needed to address responsible gaming when asked about it.

Moving closer to tip-off, all the seats in the front area of the bar were taken, and the larger area for seating in the back was rapidly filling. Berry had also talked about the concept of the “pit boss,” someone who would make the rounds and offer some insight for picks. It was not in place as he envisioned in time for the tournament, but behind the bar was Bradford serving beer, spirits, and facts.

“I can talk about sports until the cows come home,” he said while offering Auburn as his tournament champion. “I like to think I’m a pretty decent handicapper in general. I’m not a habitual gambler, but I am an opportunistic one. When I see an opportunity, I tend to jump on it.”

He also picked up on the trends of the target crowd Berry was looking to attract to the Over/Under. He noted “the amount that I’ve seen [bet] by kids in their 20s, young professionals. … They’re betting props on NBA games, all sorts of stuff that wasn’t part of the general lexicon of sports betting even two years ago.”

Also evident was the welcome return of fans wearing college gear at a bar while watching the NCAA Tournament. The Big Ten was well represented, as Ohio State, Illinois, Michigan, Michigan State, and Indiana supporters were all present. The standout, however, was a 20-something rocking a UConn Kemba Walker jersey.

Also present was this leprechaun, which was admittedly an impressive turnaround on his part given he needed the wee hours of Thursday morning to help Notre Dame get to the round of 64. 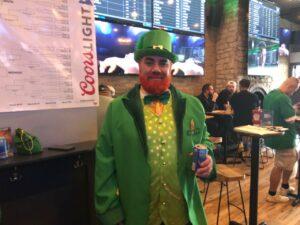 Even with all the legal sports wagering going on, the extracurriculars of filling out an office bracket or tournament squares have continued apace. Among those at Over/Under was Eric, who had out his laptop and a second screen in putting together a $2,500 progressive squares contest that pays out every game.

Eric said it took about four hours to put together the full spreadsheet, with this specific first-round contest offering $10 to the winning box in each game. He explained that as the tournament goes deeper, the prize money increases, with $25 for the second-round games and $50 for the regionals.

“It’s for people who don’t want to fill out brackets,” he noted, adding with a laugh it only took 10 minutes to come up with a progressive prize ladder because “I just kept plugging numbers into the spreadsheet until I got it to work out.”

Eric, who has run Super Bowl squares contests previously, said it took him about two weeks to fill all the available boxes since it was “new and different.”

Overall, the bar had a fun vibe, with plenty of people pulling for underdog South Dakota State against Providence. Through DraftKings, I placed a flash bet on who would score the next basket during that game. It did not prove to be winner, nor did a live bet on Colorado State.

The biggest difference from watching games last year — with COVID then a big factor — was following the random cheering from across the bar, and needing to sync yourself to the game where it originated. The NCAA Tournament was indeed, all the way back.

It was a quick walk and bus ride to Wrigleyville, where the younger crowd was beginning to make itself visible on a perfect afternoon for a St. Patrick’s Day pub crawl. Murphy’s Bleachers is located across the street from Wrigley Field, directly across from the Harry Caray statue.

While Wrigleyville on the whole is a playground for the young, Murphy’s out of baseball season is laid back, and it was a sparse crowd with as many people content to enjoy the patio area outside as watch the games inside. There was also a competitive lull when Memphis raced out to a huge lead on Boise State, and Baylor was toying with Norfolk State while the Friars were finishing off the Jackrabbits. This allowed me time to set up a mobile account with BetMGM, the latest operator to enter Illinois, and to weigh the newcomer promotions.

On the walk to Merkel’s along Sheffield Avenue, the gate to Wrigley was open as the grounds crew was already at work ahead of the season opener, allowing a clean view inside from right field. An employee noted they had re-sodded the field after the Purdue-Northwestern college football game in November. Everything was on schedule, he said, to prepare for the Cubs’ return.

Merkel’s is an “official” Iowa bar, and the Hawkeyes were a trendy pick to reach the Final Four after their impressive run to the Big Ten tournament title. But they were locked in a cage match with Richmond in the dreaded 5 vs. 12 game. The offense that had powered Iowa for much of the season failed to find a groove, and the tension among those in attendance at Merkel’s was palpable with low groans and the occasional expletive.

A group of five 20-something males who were watching kept trying to will Keegan Murray into the offensive dynamo he normally is. But an older woman, who may have seen disappointments of Hawkeye seasons past, was watching with her husband and dryly noted at halftime, “They’re looking shi**y right now.”

Most of the young men had placed wagers on the Hawkeyes game, confirming what Bradford had said earlier. On the bright side, while many a bracket inside Merkel’s was blown apart by the Spiders, my small wager on Richmond +5.5 for the second half did hit.

Nisei Lounge is a short walk from Merkel’s and also more dive than trendy hangout. About five people including the bartender were present when I arrived, which made it ideal for viewing the Marquette-North Carolina game as a Marquette alum — I could spew invective without causing a scene.

The game started out relatively well, the nee Warriors held an 8-7 lead about six minutes in. The first media timeout came and went without a curse word. Then North Carolina started scoring … and kept scoring … and continued to keep scoring. If you follow your alma mater passionately, you know the dread and despair when a full-on disaster is coming and the moment it arrives.

This was like watching Marquette get blown out of the Superdome by Kansas in the 2003 Final Four, a debacle I witnessed in person. Hubert Davis may be coaching North Carolina, but Roy Williams’ fingerprints are all over its offense, just like when he was with the Jayhawks. Brady Manek and Caleb Love were Nick Collison and Kirk Hinrich reincarnated, and Armando Bacot did whatever he pleased in the paint.

It took less than 14 minutes for North Carolina to lead by 20. It was 53-25 at halftime. I put out an R-rated tweet many in the Marquette community seemed to agree with. There was no arguing against the ultimate NCAA Tournament bar indignity — moving the game off the main screen as even 16th-seeded Georgia State was putting up a better fight against Gonzaga.

As more patrons filed in, “Sorry about your team” was heard more than once. The only drama left was whether the Tar Heels would hit 100. They didn’t, but the 95-63 scoreline was the largest margin of victory in an 8-9 game in NCAA Tournament history. So much for seashells and balloons, as Al McGuire would say.

Lighter in the wallet and cloudy in the mind, it was time to return home. The sights and sounds of March Madness were back, complete with the highs and lows that wagering on those games can sometimes increase. And that felt like a win even when the alma mater lost.

All photos by Chris Altruda