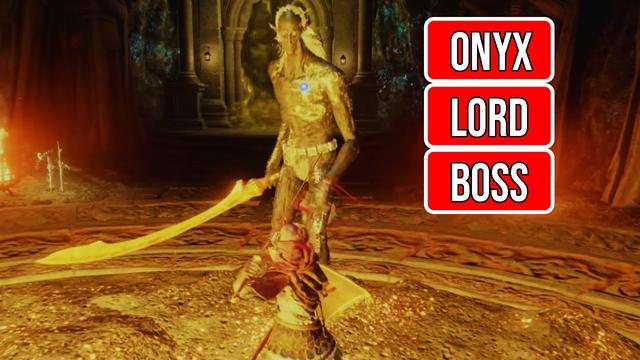 WePC is reader-supported. When you buy through links on our site, we may earn an affiliate commission. Learn more

By now, many Elden Ring players will know the joys of the Meteorite Staff. This invaluable tool has helped many budding sorcerers to stampede through the early game, breezing past difficult roadblocks like Margit the Fell Omen. But without gravity sorceries, this staff isn’t being used to its full potential. Thankfully, Liurnia’s Onyx Lord is a guaranteed source of a gravity sorcery. We’ll show you how to find and defeat this boss with our Elden Ring guide.

Elden Ring: How to find the Onyx Lord

The Onyx Lord can be found in the Royal Grave Evergaol to the Northeast of Caria Manor. This part of Liurnia can only be accessed after beating the Manor itself. Caria Manor is a section of Liurnia that is well worth exploring. Among other things, this area is home to the exceptionally powerful Sword of Night and Flame.

How to beat the Onyx Lord

Ranged attacks are recommended here. Several of the boss’s attacks have a long charge-up time, which is usually a good thing. But if you are in proximity once they have finished charging, you’re in for a world of hurt. You can take your time and barrage this boss with sorceries or other projectiles while it charges up and have plenty of warning to dodge its attacks afterwards.

The Onyx Lord’s main attack is also its flashiest. The Lord will plant its blade in the ground, causing a shockwave. This will then crack open a portal in the air in front of the boss. Meteors will launch across the battlefield at the player. Thankfully, the projectiles are relatively slow-moving, making them easy to dodge despite their large number. This is a rarity in Elden Ring, so make the most of it.

When defeated, the Onyx Lord will drop the gravity sorcery Meteorite.

All the Bosses in Elden Ring

If you want to find out more about all the bosses in Elden Ring, along with how to beat them, you can find everything you need in our Handy Elden Ring Boss Center.

We’ve been waiting to get our hands on FromSoftware’s Elden Ring for so long, we almost can’t believe it’s finally arrived and we have a massive amount of content just for you. Other than our Tier List, We’ll be here to walk you through every step of your journey through the Lands Between. Join us for all our Elden Ring content and guides over the coming days and weeks!