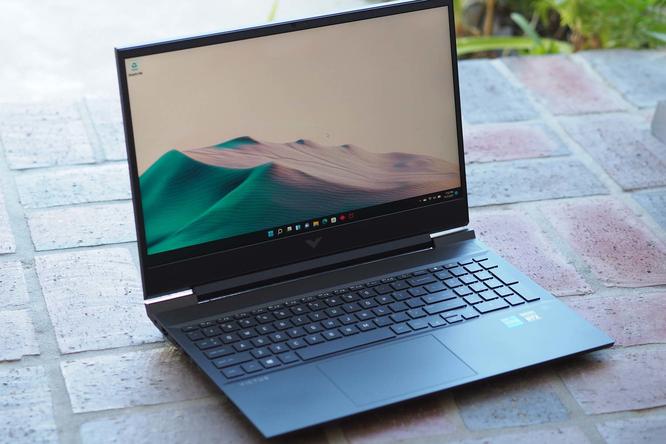 The HP Victus 16 ($809 to start) is the first entry in HP’s new Victus line of gaming laptops, which seem intended to be more affordable alternatives to HP’s existing Omen gaming laptops. But don't let that dim your interest: configurable with the latest CPUs from Intel and AMD plus some of the hottest Nvidia GeForce RTX 30-series graphics cards, the HP Victus 16 is more than respectable as a gaming machine.

If you’re looking for portability, however, the Victus is hard to recommend over other gaming laptops on the market. Plus, it has some design issues that make it a bit annoying to use on a daily basis without plugging in a fair number of peripherals.

The Victus is available for order directly from HP's website, as well as at third-party retailers like Newegg and Best Buy. The base configuration starts at $809, but that model comes with an older Nvidia GPU. To get a model with one of the latest Nvidia GeForce RTX 30-series laptop cards, you should expect to pay at least $1,000, and close to $2,000 if you kit it out with all the bells and whistles.

Our Victus review unit came configured with a 16.1-inch FHD (1920 x 1080) 144Hz display, an Intel Core i7-11800H CPU, an Nvidia GeForce RTX 3060 laptop GPU, 16GB of RAM and a 512GB SSD with an additional 32GB of Intel Optane memory. For this configuration you'll typically pay about $1,400, though since this review is being published during the holiday shopping season HP currently has some Victus models on sale or out of stock.

The Victus 16 sports an understated dark silver (or blue if you pay an extra $10) chassis that has a lot going for it.

The two built-in fans keep the machine nice and cool even in high-performance situations, and with three USB-A ports, one USB-C port, an HDMI out and even an Ethernet port, it's got plenty of options for plugging stuff in. Heck, I've looked at desktops that cost as much as this laptop and don’t have as many ports.

The Victus 16's design does have some issues, though. For starters, the laptop’s sharp, angled aesthetic pairs with the big sans serif V emblazoned on the top of the case to give the Victus a vibe that shoots straight past "serious gaming machine" and approaches "company laptop for an evil corporation in a sci-fi movie."

As strong as that aesthetic statement is, the fans may be even stronger, sometimes drowning out the laptop's speakers when playing graphically-demanding games.

The machine’s weight is also a bit of an issue. HP’s website says the Victus "starts at" 5.44 pounds, and though I didn’t have a digital scale handy my guess is this configuration adds to that estimate. It's a heavy laptop, and though carrying it around your home shouldn't be an issue, lugging it around in my shoulder bag while I'm out and about seems like it would be a real chore.

These functional design foibles are that much more painful because overall, I like the design of the Victus. As much as I’m poking fun at it for having a lot of design elements that feel, for lack of a better term, evil, I actually admire the Victus team for taking a big swing on the design here instead of producing another boring black gaming laptop. The design of the Victus might make it look like Lex Luthor’s personal computer, but I can at least pick it out of a lineup — which is more than I can say for a lot of laptops on the market. 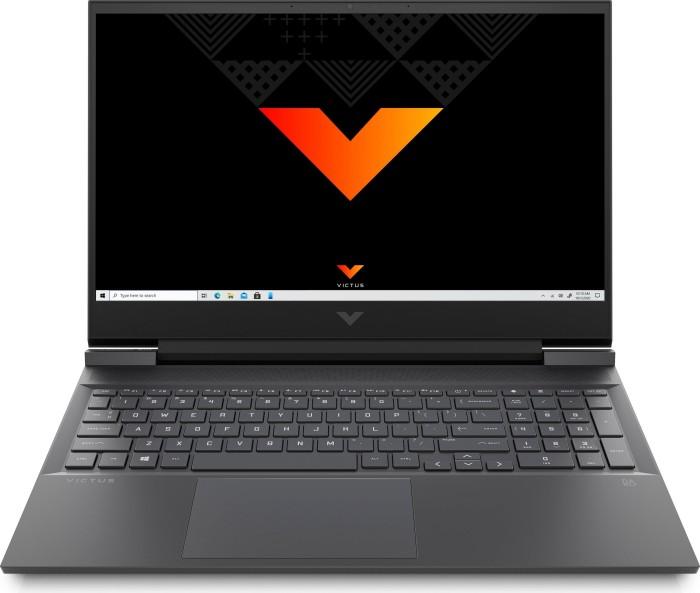 The model we reviewed came with the standard 16.1-inch 144Hz FHD display, and I really like it. The 16.1-inch screen looks big and bright for a laptop, and while the monitor’s resolution is only 1920 x 1080, the Victus is specced (and priced) to deliver the best gaming performance at 1080p anyway. The display might feel a bit small if you're used to playing games on a larger desktop monitor, but luckily the Victus' HDMI port makes it easy to plug in a second monitor.

I was also impressed by the audio quality of the sound coming out of the Victus' speakers. They've been tuned by Denmark-based Bang & Olufsen, and in my experience they're equally great for listening to music or watching streaming video. However, it's a bit harder to speak to their sound quality while playing games, because (as previously mentioned) they're often drowned out by the sound of the fans spinning up during graphically-intensive gaming.

The Victus performs as well as most gaming laptops in the $1-$2k range. It can run most games well at 1080p, and in my hands-on testing I didn't have any trouble playing through my Steam library.

The 14-inch Asus ROG Zephyrus G14 ($1,449), one of our top picks for the best gaming laptop you can buy, is in the same price range as the Victus yet delivers nearly twice the performance in Grand Theft Auto V. However, the Shadow of the Tomb Raider graphical benchmark ran quite a bit better on the Victus compared to the Zephyrus G14.

That said, the Victus delivers solid overall performance for a 16-inch gaming laptop in this price range. Which is good, because this laptop often feels like it’s made compromises in the name of delivering affordable gaming performance.

The Victus’ 4.9 x 3.2 touchpad feels quite large and performs well for casual tasks. Unfortunately that feels a little like wasted effort. It’s no replacement for the precision of a mouse, or the extra inputs of the best gaming mice. As a result most people are going to be plugging in a mouse to do any serious gaming.

Then there’s the keyboard.

On the positive side, the Victus’ Keyboard comes with a full number pad. The keystrokes are nothing to write home about, but the keys feel responsive and it’s clear whether you have or haven’t depressed them completely. The problem is that the addition of a number pad means the rest of the keyboard is slightly off-center which, quite frankly, drove me slightly mad.

It’s possible that given more time and practice, I could adjust to this. I gave it a real try, worried that I was being unreasonable and too particular, but my typing muscle memory fought me at every turn.

Some small design decisions on HP’s part also made the adjustment difficult. There are bevels on the F and J keys so you can reset to typing position by feel, but to my fingers they're too small to be very useful. Considering this is a gaming laptop, I’d also have appreciated a touch guide of some kind to the WASD keys.

On the third day of trying to adjust to the Victus’ keyboard I just gave up and plugged in my own.

Heat’s another area where you may be better off treating the Victus a bit more like a desktop when it’s time for serious gaming. In more casual use cases like web browsing or watching videos the Victus stayed at a relatively cool 91 degrees.

After 6 back to back runs of the Metro Exodus benchmark however the underside of the machine reached 117.5 degrees, even with the aforementioned noisy fans working overtime. That’s not hot enough to affect performance, but probably hot enough you’ll want to keep the laptop away from your lap.

The battery life on the Victus doesn't blow the competition out of the water, but I also didn’t find it a hinderance in any way. It took over four hours of more casual use to get a low battery warning. Running a graphics-intensive game cut into that battery life significantly, but in practice you’re going to want to plug in so much stuff for serious gaming that the Victus should probably be stationary and positioned near a power outlet anyway.

In our gaming laptop battery test, which tasks the laptop with looping a 3D-rendered scene in PCMark 10, the Victus 16 an hour and thirty minutes. That's better than the hour the MSI Katana 76 lasted, though the power-sipping Zephyrus G14 outlasted both.

In the end, how much you like the Victus is going to depend on you prioritize the gaming and laptop aspects of your gaming laptop. If your emphasis is on gaming, the Victus can push out some impressive graphics for not too much money. In fact, I’d say the Victus really shines when used as a kind of budget gaming desktop. Though the design is stark, I think it’s a handsome gaming machine. And if you plug in a good keyboard and mouse it's not bad for getting things done, either, especially when hooked up to an external display for an impromptu two-monitor setup.

Once I’d plugged in my mouse, keyboard, headphones, second monitor and ethernet cable though, it felt pretty silly calling this a laptop. Whenever I tried to use the Victus as an actual portable computer, some design misstep or missing feature made me long to plug it back into the half-dozen peripherals that made it fun to use.

If you’re judging by pure performance, the Victus delivers a pretty good showing for its price. But with a design that isn't very portable, the Victus also left me wondering why I shouldn't just buy a similarly-priced model of one of the best gaming desktops to save myself some hassle.