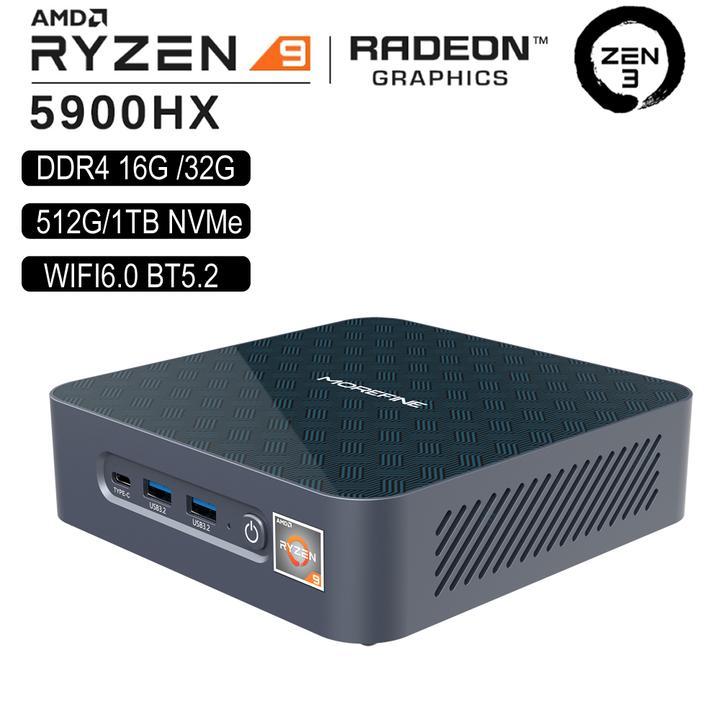 Morefine is a Chinese manufacturer that has been making compact PCs for many years. The performance of the compact Mini PCs has been improved continuously through new developments. Morefine now markets its top model that is based on the AMD Ryzen 9 5900HX under the name S500+. The recently reviewed Minisforum EliteMini HX90 also featured this processor and offered a great performance. With this knowledge, we set out to run benchmarks with high expectations. The small Morefine delivers an excellent performance as well, which you won't want to miss in everyday use after having tried it for a short time.

The very high operating speed makes the Morefine S500+ interesting, and at the same time, the system is also suitable for CPU-intensive tasks. Just like Minisforum, Morefine also follows the same path by selling the S500+ as a barebone as well as a preconfigured system with RAM and SSD storage. You currently have to pay $779 for the S500+ without SSD and RAM. Our review sample with 32 GB RAM and a 1 TB SSD costs $1,099. However, the top of the line is reached at $1,225. With that, the Morefine S500+ also comes with 64 GB of RAM as well as a 1 TB SSD. There are also alternative CPU configurations, and they can be found on the S500+'s packaging. The less powerful model based on the AMD Ryzen 3 5300U starts at $499, including shipping to Germany and taxes.

The hardware is housed in a very compact case that measures 149 x 145 x 40 millimeters. This makes the Morefine S500+ considerably more compact than the Minisforum EliteMini HX90. However, Intel's NUC 10 Mini PCs are even more compact in terms of dimensions.

The Morefine S500+ is delivered in a sturdy box with all the accessories needed to get the PC up and running quickly. The relatively large power supply is a bit flatter than that of the EliteMini HX90, but it also lacks a USB-C connector. In addition, the package includes a mounting plate to attach the device to a display (Vesa mount). Internally, the device can be equipped with two additional storage drives. Consequently, a total of three storage units can be installed in the small PC.