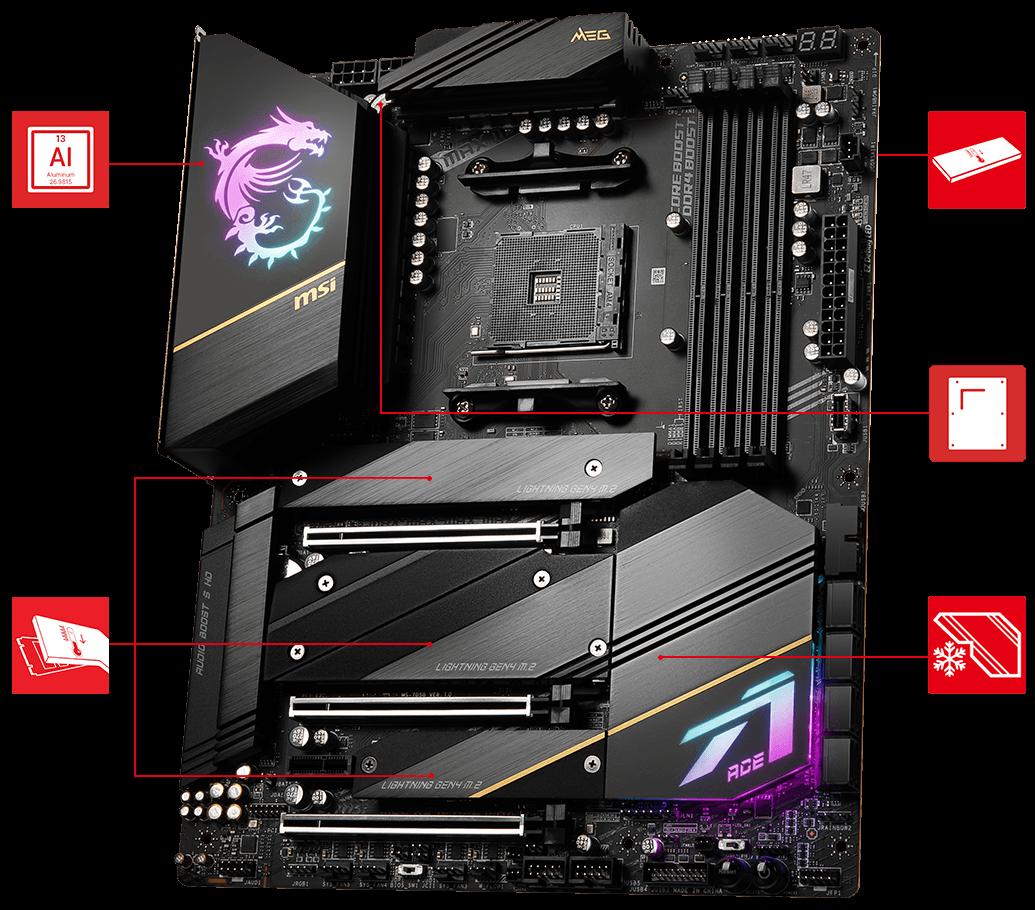 With Zen 4 looming on the horizon, we begin our wrap-up of AMD 500 series chipset motherboards. Starting this wind-down, MSI sent over its top X570S SKU, the MEG X570 ACE Max, which adds incentives to the platform for any consumers still looking t the viability of Zen 3 CPUs for their gaming or gaming productivity machines.

A few of the key ingredients in this refreshed motherboard come in the form of its thermal capabilities. This includes an enlarged chipset heat sink, full thermal armor for the m.2 slots, and improved heat pipe design for the VRMs. While discussing increased cooling for the VRM, we should also note the new 16+2 power design, an all-digital direct design that uses 90A smart power stages.

Storage includes 8x SATA connections for legacy drives and four m.2 slots, all Gen4 capable. Networking consists of the AX210 WiFi6 chipset from Intel and Realtek 2.5Gbe, while audio is handled by the newer ALC4080 paired with an ESS Sabre 9018DAC.

Packaging for the Ace Max includes an image of the board to the left socket and chipset support down below.

The rear of the packaging includes features to the right and specs right below, including a rear I/O layout.

Accessories include Wi-Fi antenna, SATA cables, and the M.2 XPander.

The Ace Max keeps the gold and black colorway we are used to with a large MSI gaming logo on the Rear I/O shield. Much of the board is covered in black armor, and PCIe slots are reinforced and shielded.

The back of the board is mostly blank. Added backplates for the VRM heat sink can be seen above.

Rear I/O includes a full host of USB ports, four 2.0 at the top followed by another four Gen1. Further down, we have three Gen 2 ports in red and USB-C using Gen2x2.

Running around the board, we have front panel audio connections starting off on the bottom. This is followed by a host of RGB and Fan connections, USB 2.0 headers rounding it out.

Just before we move around the corner, we find a USB 3.2 header along with power and reset buttons.

Getting around the corner, we find eight SATA connections and another Gen1 USB 3.2 header. 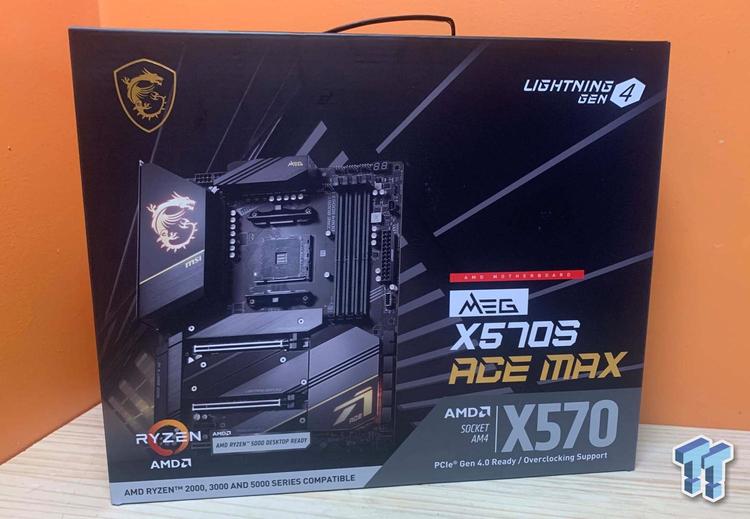 Moving up the side of the board, we run into a Gen2 internal header and the 24-pin power connection, ending at the debug LED.

Dual 8-pin power connections are available for the CPU.

BIOS for the MEG Ace Max is Click BIOS 5. Starting with the easy mode, you will get all information about the CPU and RAM along the top, including frequency and temperature. The boot sequence shows installed drives and fan controls to the right.

Advanced mode is where you will find tweaking tools for CPU and memory, including voltages. AORUS has additional options in the IO Ports menu; these include the ability to disable IGP and configure LAN controls, Thunderbolt, and storage.

Sabrent supports our storage testing with the Rocket 4 Plus.

Cinebench is a long-standing render benchmark that has been heavily relied upon by both Intel and AMD to showcase their newest platforms during unveils. The benchmark has two tests, a single-core workload that will utilize one thread or 1T. There is also a multi-threaded test that uses all threads or nT of a tested CPU.

In Realbench, we see a time of 33 seconds for the heavy multitasking workload.

PCMark is a benchmark from UL and tests various workload types to represent typical workloads for a PC. Everything from video conferencing, image import, and editing, along with 3D rendering, are tested.

We picked up 13691 for digital content, the highest for the Ace Max. Both essentials and productivity land and 11K and 10K, respectively.

Photoshop workloads pull in 1194 for the Ace, on par with the average across all boards.

Moving to the Davinci Resolve workloads, we see a score of 1147, middle of the road for X570.

Storage performance was fantastic, NVMe topping 7022 MB/s with our Sabrent Rocket Plus.

The MSI X570S Ace Max is one of the better "refresh" boards we have tested. It's in many cases a sizable upgrade from the X570 Ace; the Max has better overall options for connectivity, including add-ons like Gen2x2 and WiFi6 and a better audio chipset. Aesthetically, this board engaged a subtle armor design capable of being without RGB entirely, something not always easy to find in the current market.

In testing, the Ace Max ran alongside previous boards in most scenarios, including Cinebench R23 and Realbench. AIDA memory showed bandwidth pushing 46K read and copy, while write was in the middle at 25k. PCMark 10 showed this board running up with the top boards tested, and our Flight Simulator gaming runs averaged out to near 51 FPS at 1080p Ultra settings. Storage performance was fantastic, hitting 7022 MB/s with our Rocket Plus and additional testing of external ports proved no issue for the Ace Max.

While the market for Zen 3 has certainly changed over the last few months, the Ace Max remains a solid option for any consumer wanting to pick up a great full-featured motherboard based on the AMD X570 chipset.

The Ace Max has a stacked rear I/O with twelve USB ports split between USB 3.2 and USB 2.0 alongside 2.5Gbe, Wi-Fi 6, and a legit audio stack complete with ESS DAC.