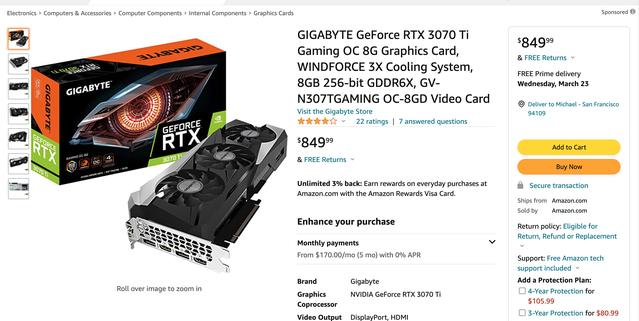 If you gave up on buying a PC graphics card because of bots and the chip shortage, there’s some good news: In recent weeks, the supplies for both Nvidia and AMD GPUs have gotten substantially better, making them easier to buy in the US.

No, you probably won't find your ideal GPU on the first try. Nor will you see the best prices. However, many graphics cards are remaining in stock for hours over online retailers including Newegg and Amazon. That’s a huge change from a year ago when the products consistently sold out inseconds.

The better supplies become apparent if you use an online restock tracking service, which will monitor when the products are back on sale at retail pricing. Over the last week, we’ve seen Nvidia’s RTX 3050, 3060, 3060 Ti and 3070 Ti units remain available on Newegg for hours, enough time for an average consumer to nab one.

Examples of graphics cards we found in stock on Newegg, although the pricing is still pretty meh.

The same has been true for AMD's GPUs. In addition, the graphics cards we found in stock were sold by the retailer itself, not some third-party merchant with an unknown record on honoring refunds.

One GPU restock tracking service, Falcodrin Stock Alerts, said it began noticing the improved supplies about three weeks ago. “Yea it's getting way easier. You can buy basically any tier of card from an authorized reseller, same day,” the service said.

That’s especially true for the pricier graphics card models from third-party vendors, such as Asus, Gigabyte and MSI. “The most expensive of each tier are just staying in stock. Lower priced ones are selling out between 10 minutes to a few hours,” Falcodrin added.

A separate GPU restock tracking service, Fixitfixitfixit, agreed that the supplies have gotten better over the past month. “Yes, things are definitely becoming more available. There will likely still be issues with new (next-gen) products, but the older (RTX) 3000 series of cards are no longer as difficult to get,” the service said. 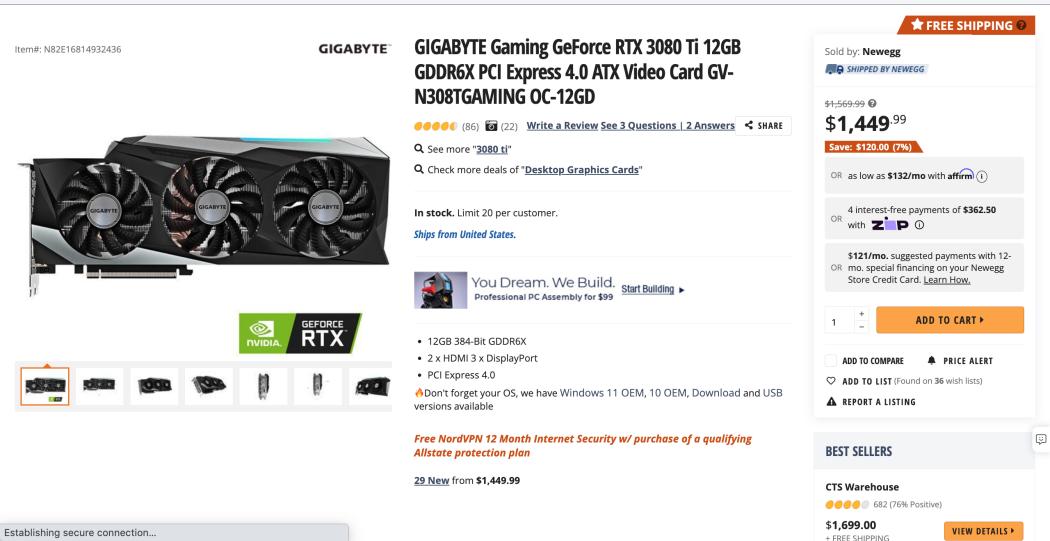 The better supplies occurs as pricing on eBay for PC graphics cards has also fallen. For example, eBay's Terapeak tool shows the average selling for Nvidia's RTX 3070 has decreased to $768 as of today, down from around $1,100 back in December. The average selling price for the RTX 3080 has experienced a similar decline.

This suggests the massive demand for GPUs may have finally lessened (for now at least), resulting in better supplies. But it's also possible pricing is playing a factor in steering consumers away from the products.

“I think everyone willing to pay slightly more has been satisfied at this point and is bailing,” Falcodrin said, while adding: “The problem now is that the only people hunting still are really picky on price.”

Indeed, price inflation began hitting GPUs last year due to the chip shortage and the soaring demand. So many of the products in stock today cost $100 to $200 or more compared to their original starting price, making the GPUs far more expensive than what consumers would be willing to pay. For example, one Gigabyte RTX 3060 Ti that was in stock today at Newegg was going for $609, which is substantially higher than the $399 starting price for the 3060 Ti series.

An exception to the price increases has been the Founders Edition RTX 3000 cards Nvidia has been selling over Best Buy. These products have been consistently offered at the original starting price, before the price inflation set in, making them some of the most bang-for-your-buck GPUs on the market. But on downside, they've been incredibly hard to buy.

"I still see evidence of a consumer sentiment that the prices are still a bit too high as there are a lot of people waiting for the cheaper Founders Edition cards rather than buying the available more expensive stock today," Fixitfixitfixit added.

Chinese Customs Seize 5,840 Graphics Cards Valued at $3.1 MillionIntel's Arc Desktop Graphics Cards Will Arrive in Q2, Not Q1New Graphics Card Too Expensive? How to Squeeze More Performance From Your GPU

Next-Gen Is Right Around the Corner

The better supplies also occur as AMD and Nvidia have said they've made progress in boosting their GPU manufacturing. According to both companies, the supplies should significantly improve in this year's second half.

The other factor looming over the GPU sales is how next-generation graphics cards from Nvidia and AMD are expected to launch around September. In addition, Intel is preparing to launch its own desktop graphics cards in Q2. As a result, some consumers may have decided to hold off from buying, leading to better supplies. According to Fixitfixitfixit, these users “threw their hands in the air” after struggling to obtain the current generation of graphics cards.

"I wouldn't be holding my breath for [RTX 4000] series though," added Falcodrin, who predicts the pricing for the next-generation GPUs will be insanely high.

In the meantime, retailers have been spotted slashing prices on some current-generation GPUs, according to another restock tracker on Twitter @CameronRitz. This is likely because the products are so expensive, the retailers are having trouble selling them.

For example, Newegg has been discounting a Gigabyte RTX 3080 Ti card and an AMD Radeon RX 6900 XT, although the pricing is still sky high at well over $1,200.Best Buy has been doing the same for at least a few products.

Whether it’s better to buy now or wait is anyone’s guess. But if you’re interested in obtaining a graphics card as soon as possible, we’d recommend you follow a GPU restock tracking service by checking out their Twitter, Discord or YouTube pages. You can also visit the “Buildapcsales” page on Reddit for a list of some of the latest restocks.