There's no question that YouTube is among the most pervasive video streaming services today; while Netflix and Hulu might have more commercial cachet, almost everything on YouTube is free. And though YouTube claims around 2 billion users worldwide, there are times when a site even that large and relied upon experiences problems.

Like any website that may not be working, it can be hard to know exactly what the problem is - there might be a number of issues with the site, your internet connection, or the device you're trying to connect with. Work through your YouTube issue by trying each of the troubleshooting tips below until you uncover the problem.

Despite myriad problems that might keep you from successfully watching a video on YouTube, the most likely one is also the easiest to troubleshoot: Do you have a reliable internet connection? If you're on your phone, check the status icons at the top of the screen to see if you have Wi-Fi or a cellular connection. If in doubt, open your phone's Settings app and turn the Wi-Fi off, then on again.

A sure-fire way to check for internet access is to try another app that requires a connection. You might check to see if you can start playing a video in the Netflix app, for example, or see if you can send and receive email.

YouTube is a relatively dependable video streaming service, but the site has occasional outages. If you know your own internet access is solid, then it might be a good idea to see if the service is offline before you waste your time trying other troubleshooting tips. The easiest way to check is to go to YouTube's status page at DownDetector, or just search for "Is YouTube down" in a Google search (DownDetector is typically at the top of the search results). If the site is down, wait a while and try again later.

If you're trying to watch YouTube on a mobile device, it's possible the YouTube app is misbehaving. The remedy? Force the app to close and then restart it - here is how to close an app on Android and close an app on iOS. If you were trying to watch YouTube on a smart TV or streaming media player, you can close and restart the app there as well, though the steps vary depending on what device you own. 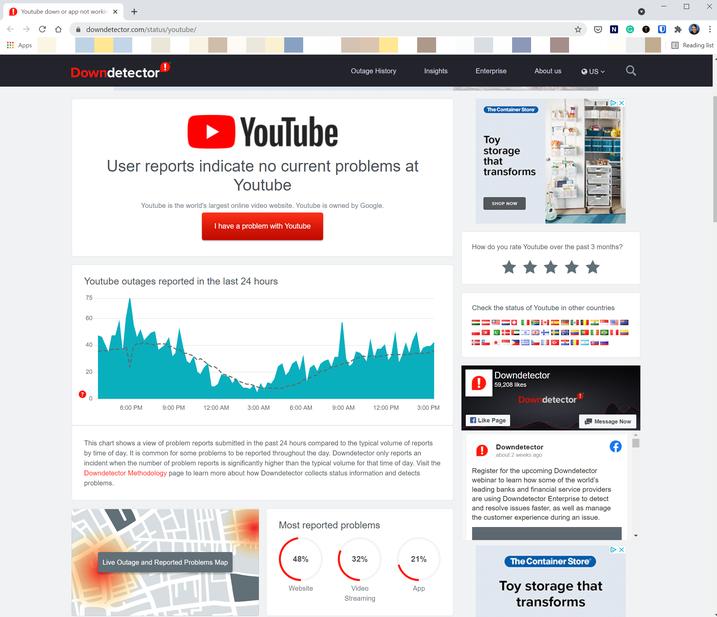 If you're trying to watch YouTube in a web browser on your computer, you can close the browser and restart it, but an even better solution is to open a different browser (like switching to Firefox if it's not working in Chrome).

If that doesn't solve your problem, restart the entire device (for example, here is how to restart an iPhone).

One of the best ways to troubleshoot a problem that could have a lot of possible causes is to try it on another device. If you're watching YouTube on your phone, check to see if YouTube has the same glitch on a tablet, Roku player, or in a browser on your laptop. If you're on a computer and don't have easy access to other devices, you can try running YouTube in a different browser.

If YouTube refuses to work properly on your phone or tablet but it seems to be working fine elsewhere, then you might have a problem with the app or its cache.

If you're using an iPhone, there's no way to clear YouTube's cache without uninstalling the app, so do that - uninstall YouTube from your iPhone, and then reinstall it from the App Store.

If you are using an Android phone or tablet, it's a little easier. The steps might vary slightly depending on which version of Android you are running, but here's the general procedure:

Sometimes the problem isn't that the app won't launch or nothing works at all. If the video lags and stutters or the audio is out of sync, your connection might not be fast enough. You can run an online speed test like Google's Internet Speed Test to see how fast your connection is. You can do this on a phone, tablet, laptop or desktop computer.

YouTube says your connection needs to be at least 1.1Mbps for a standard-definition 480p video, but the faster the better, and a high-resolution 1080p video will need at least 5Mbps. There are several ways to speed up your internet connection.