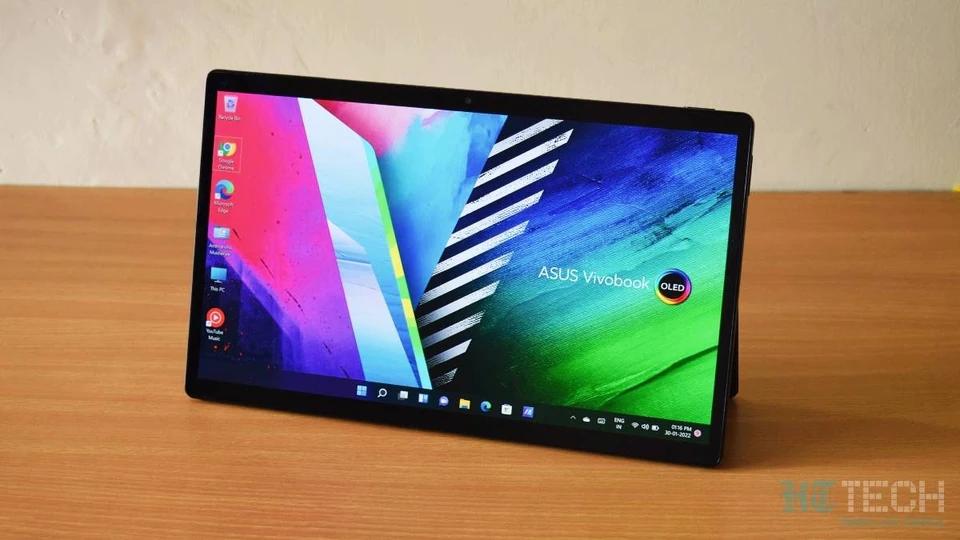 The Apple iPad is the gold standard of tablets at the moment and despite other companies trying their best to dethrone it, Apple’s formula is simply perfect. A rock-solid OS platform with dedicated apps, a great display, and superb performance make any iPad the king of this category. But, an iPad is still not a laptop replacement due to iPadOS’ limitations and hence, this is where Asus thinks it has a chance with its VivoBook 13 Slate tablet.

Being marketed as the “portable OLED TV”, the Asus VivoBook 13 Slate is essentially a 13-inch Windows 11 tablet with a brag-worthy OLED display, some cool accessories, and enough meat within to make Asus demand Rs. 45,990 for the base variant. That is tempting even for those seeking a budget Windows laptop!

Curious to see how this Asus tablet fares in reality and whether it can dethrone my iPad Air from the high pedestal I have given it, I used it as my main computer for two weeks. Yeah, a tablet as a work PC! You do need to have such eccentricities to be a technology journalist.

Staying true to its name, the Asus VivoBook 13 Slate has a very slate-like form factor, courtesy of the 16:9 aspect ratio of its 13.3-inch display. This aspect ratio makes for the TV experience that Asus is advertising but, in the process, also makes it very unwieldy. You can easily hold an iPad with one hand while you interact with it – not the case with this Asus tablet. This is bulky in comparison and could actually end up making you put it on a table, or attach it to its detachable kickstand.

Yes, Asus is offering a detachable kickstand, a sleeve, a keyboard cover, and a stylus as part of the package on the top-two variants. The kickstand attaches magnetically to the tablet’s back but these magnets aren’t very strong. Hence, if you aren’t cautious, you are going to drop this tablet on the table or any surface while adjusting the stand’s angle. The keyboard sleeve looks similar to the keyboard folio case on an iPad but it doesn’t stick to the tablet when closed. The stylus has to be managed separately as well.

While I appreciate Asus for including these accessories on the top models, I wish they could have been built with more thought. Most users will be better off with a cheaper Bluetooth keyboard and mouse. Note that the sleeve keyboard isn’t backlit.

Since this is a Windows tablet, there are ports! Yes, that's the plural – ports. There are two USB-C ports for charging and data transfer (no Thunderbolt), a micro SD card slot, and a 3.5mm headphone jack. Wireless connectivity options include Wi-Fi 6 and Bluetooth 5.2.

The star of the show is the tablet’s display – a 13.3-inch Full HD OLED display with an aspect ratio of 16:9 and 550 nits of peak brightness. Asus says the display is Pantone validated and supports DisplayHDR True Black 500. In short, all the good stuff you can imagine on a tablet device. 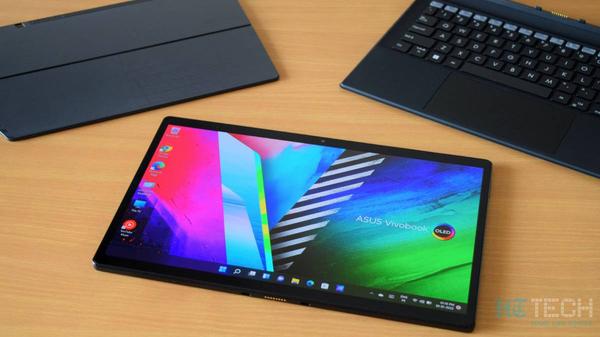 It looks as good as it sounds on paper – make no mistake. Compared to the LCD displays on similarly priced iPad Air and Samsung tablets, the OLED display is a luxury for the eyes. Whether you are watching YouTube videos or catching up with your Netflix shows, consuming all of it on the Asus VivoBook 13 Slate is a treat for the yes. The traditional OLED blacks and high contrasts make even the Windows 11 bits look beautiful. Viewing angles are wide and fine, with no weird tinting issues observed. If you seek a good display experience from your tablet, the Asus VivoBook 13 Slate is now our top recommendation replacing other tablets at this price.

This is where the VivoBook 13 Slate becomes polarizing. Make no mistake, the Intel Celeron N6000 processor coupled with 8GB RAM and 256GB SSD storage make this a fairly fast Windows 11 PC to work on. Windows 11 is itself well optimized for low-spec devices and it showed on a daily basis. I subjected the Slate to my office workloads, which includes 9-10 tabs on Google Chrome running simultaneously, WhatsApp Web and MS Word active in the background, and YouTube Music blasting audio as well. The experience was not as snappy as you would see on a Core i5 laptop but I observed no lags or painfully slow loading times.

This would alone have led me to recommend the Slate. But the lower variants have to make do with just 4GB RAM and a much slower eMMC storage. Hence, the Windows 11 experience on those variants could be slower and far from pleasant. The base variant even lacks the fingerprint sensor, and there’s no Windows Hello for facial recognition.

Then there’s Windows 11. Asus is adamant of the VivoBook 13 Slate to be more of a tablet than a convertible laptop. You cannot ignore the fact that Windows is built from the ground up for PCs and laptops, and hence, when using it as a tablet, the OS feels incomplete. The idea of double tapping on an app to open, and the idea of dealing with right-click menus and several traditional Windows apps having total disregard for touch devices – that’s not what you want in a tablet. It should be as easy as a smartphone to use.

Windows 11 also lacks the quality ecosystem of tablet optimized apps, which the iPadOS excels at, and even Android apps are decently optimized for tablet devices. Most of the time, I had to run my streaming apps via the Google Chrome browser since the apps on the Microsoft Store are usually ridden with bugs. We will have to wait for Windows 11 to bring Android apps but until that happens, the Asus VivoBook 13 Slate is dealing with an operating system that isn’t built for keyboard-less tablets.

Move past the OS issues and the Asus VivoBook 13 Slate impresses with a decent set of stereo speakers. The speakers don’t have as much depth as the ones on an iPad but they are plenty loud for a small room. Moreover, the 3.5mm jack means you can plug in your wired headphones or speakers to get the most out of it.

Asus also offers a 13MP camera on the rear and a 5MP front camera for video calls. The 5MP camera does a decent job during Zoom and MS Teams meetings, while the rear camera is best left for scanning documents.

With a more office-like workflow, the Asus VivoBook 13 Slate managed to last eight hours on average. For a tablet running on Windows, that is impressive by all means. The standby time is also good, although the tablet defaults to go into sleep mode more often like a Windows laptop. Hence, waking up the tablet after an hour or so requires some patience as it loads up everything. It takes just under 1.5 hours to do a full recharge from 5 percent battery with its 65W charger, which is impressive by all means.

It is always good to see versatile Windows devices such as the Asus VivoBook 13 Slate hitting the market at reasonable prices instead of just pampering the well-heeled crowd. Starting at Rs. 45,990, the VivoBook 13 Slate is a capable device but brings along a lot of caveats too. The brilliant OLED display cannot overshadow the wonky implementation of a first-generation product -- it is simply not as well-built as a Samsung Galaxy Tab, forget the Apple iPad range. It is bulky for a tablet and the bundled accessories don’t inspire confidence.

Then there’s the OS itself! Windows 11 on a laptop is great but I don’t find it user-friendly on a tablet with no keyboard or mouse. Plus, the lack of tablet optimized apps, and the fact that I have to open Google Chrome to do everything makes me gravitate more towards an iPad.

And lastly, the price. The version I reviewed had an SSD storage with 8GB RAM, costing Rs. 62,990. The base model has slower eMMC storage, half the RAM and misses out on accessories. Hence, I doubt whether the performance on that variant will be as slick as on the SSD variant. And if you are spending Rs. 63,000 on a Windows tablet, why not buy a convertible Windows laptop with a much faster processor and a proper laptop form? Even if you want a tablet at that price, why not get the much more polished iPad Air, or spend more on the iPad Pro? Those two have nice displays for binge watching as well.

The Asus VivoBook 13 Slate stands out with its fantastic OLED display and the versatility of a desktop-grade OS on a tablet. But if I have to recommend a tablet that delivers the best overall tablet experience, good performance, and a great display, the Apple iPad Air, or the slightly more expensive iPad Pro M1 still remain top preferences.