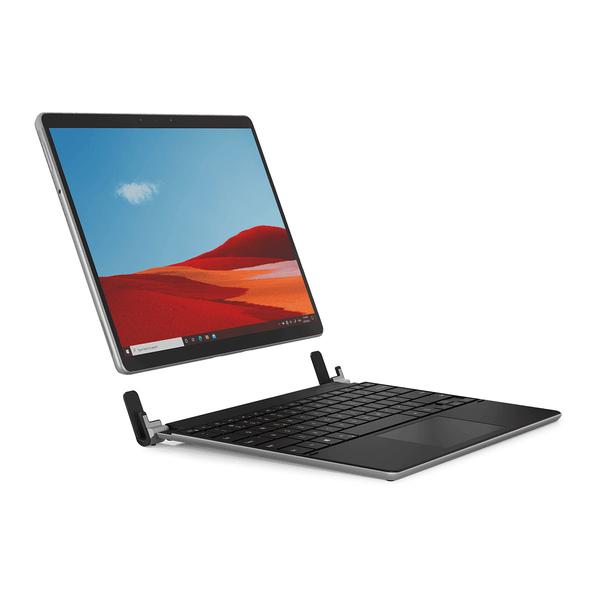 Brydge SP Plus review: Turning the Surface Pro 8 into a laptop

With the Brydge SP Plus, the Surface Pro 8 fits snugly into two clamps, which have a hinge that feels much tighter than a floppy Surface Keyboard. It makes a big difference, and to use a word that was made up by Microsoft’s own Panos Panay, it’s much more lappable.

And indeed, even in its eighth generation of the product, Microsoft doesn’t do a great job of making a lappable product on its own. With all first-party products, you have to use a Surface with the built-in kickstand and the attachable keyboard. It’s not comfortable on your lap. With the Brydge SP Plus, on the other hand, there’s weight in the base, so it feels just like using a proper laptop, right up until you pull the tablet out of the clamps.

Moreover, it comes with Designed for Surface branding, meaning that Brydge actually worked with Microsoft on this.

The Brydge SP Plus is available now for $139.99, and you can get it from either Amazon or Brydge’s own website. You can get it in either Platinum or Black, just like the Surface Pro 8, so it’s up to you if you want to match or if you want a two-tone look.

While this is a Bluetooth keyboard that will technically work with any device that supports Bluetooth 5.0, it’s worth remembering that it’s designed for the Surface Pro 8 and only that. The Surface Pro X is a very similar device, and out of its three dimensions, two of them are the same, but it’s thinner. That means that the Pro X will fall out of the clamps on the SP Plus. The good news is that if you’re using a Surface Pro X, Brydge also makes a keyboard called that, aptly called the SPX Plus, which is also on Amazon.

About this review: Brydge sent us the SP Plus for review. It did not have any input in the contents of this review. 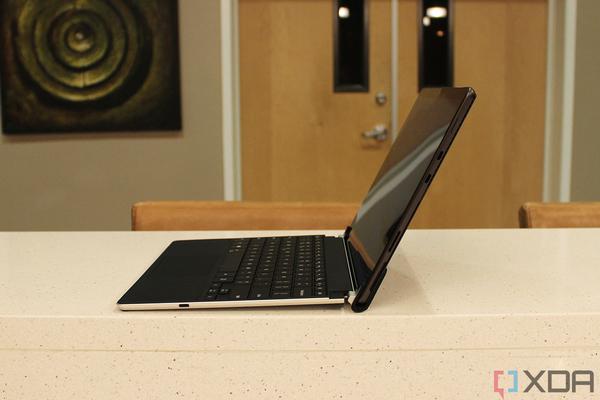 The best part of the Brydge SP Plus is that it just feels like using a laptop. It opens up like a laptop, you can use it on your lap comfortably, and it’s comfortable to type on. The company also makes other keyboards for the rest of the Surface tablet lineup, as well as for Apple’s iPads. They’re all great.

It doesn’t take anything away from the tablet experience either. As you can see from the image above, the tablet just sits in a pair of clamps, and those clamps are attached to the hinge that holds the device up. The inside of those clamps are padded, so you can easily remove the tablet and use it as such. After all, if you weren’t going to remove it at all, you’d probably just have purchased a Surface Laptop, or even the more comparably-sized Surface Laptop Go.

Not only does it add a new dynamic to the product, but I feel like it fundamentally changes the form factor in a good way. It’s reminiscent of a Surface Book form factor, but thinner, lighter, and without dedicated graphics. You still get a full laptop form factor, with the detachable display, but without it being crazy expensive or being more powerful than you need.

Battery life is great too. Brydge’s metrics on this are a bit all over the place, because there’s one stat for not using the backlight and one for using it, and they’re measured differently. If the backlight is on, Brydge promises 40 hours, which is five full workdays. Without the backlight on, the company promises six months, but only at two hours a day, so that should work out to about 365 hours.

I can tell you that I did not do any battery testing with this. It’s a Bluetooth keyboard, and it always had a charge when I went to use it. And if you need a charge, there’s a USB Type-C port right on the side, so you can always top it up whenever you need to.

That’s how I look at these types of devices, that get weeks of battery life. It’s a non-issue at that point. Since you have to charge it so rarely, you might forget to, but then you can just juice it up when you need to, and you can always use it while it’s charging.

There are just a few other things that are pretty great about the Brydge SP Plus. The keyboard is backlit at three different brightness levels, which is great for a Bluetooth keyboard. It’s also got a Microsoft Precision touchpad, so it supports all of those gestures that you’re used to.

This product is officially Designed for Surface, meaning that it’s certified by Microsoft. That’s a big deal for a third-party accessory.

Microsoft does sell a Slim Pen 2 with a separate charger. Still, you’ll have to carry it with you.

Another thing I’d really like to see from Brydge is a keyboard is for it to connect to the Surface’s own keyboard connectors. Sure, a Bluetooth keyboard is fine, but wired is always better than wireless. To be clear, I didn’t have any connectivity issues with this excellent product. Sometimes though, it takes a bit to connect when I first start using it. Also, if it as physically connected, you wouldn’t have to charge it.

I mentioned earlier that I thought a singular clamp in the center would make more sense than the two on the sides, because it would allow you to use the tablet vertically. With that, you’d be able to connect to the keyboard ports when it’s used horizontally too, assuming that functionality was added. Obviously, vertical orientation will always be Bluetooth.

Finally, I’m not a fan of how thick the clamps are. Laptops and tablets are generally flat, so it’s not a problem to put something else that’s flat next to them in a bag. These clamps are thick enough that it’s not really flat anymore, and it’s worth noting. I’d never put a tablet next to it with the glass facing the back of the Surface Pro 8, for obvious reasons.

Who should buy it?

I broke this review up into sections for what I like and what I don’t like because while the Brydge SP Plus is a wonderful product, it’s not for everyone.

Who should buy the Brydge SP Plus:

Who should not buy the Brydge SP Plus:

Like I said, the Brydge SP Plus is a great product for numerous reasons. Not only does is change the form factor of the Surface Pro 8 in a good way, but it’s also just a great keyboard. I like using it a lot more than a Surface Keyboard, and I think it’s great for most users.