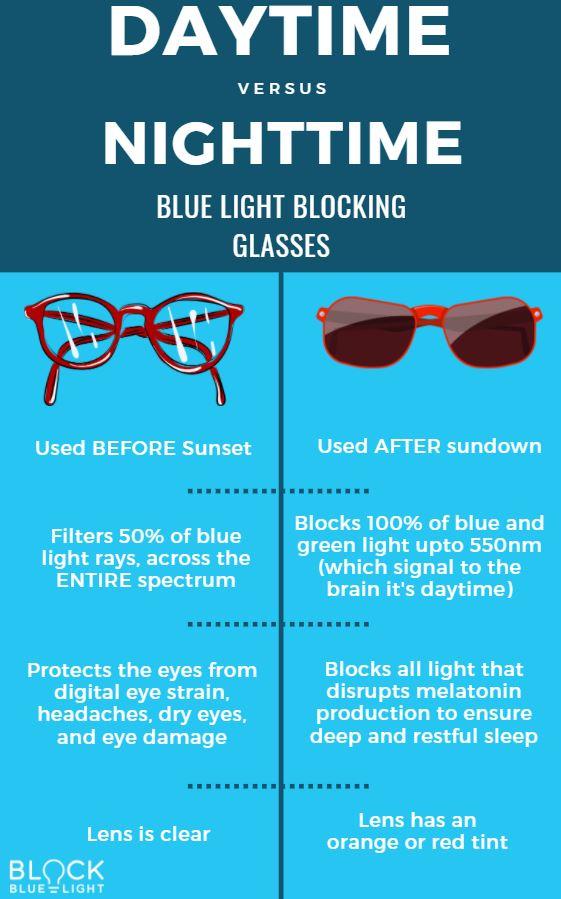 Do Blue Light Glasses Work? Everything You Need to Know

If you’ve shopped for a new pair of prescription glasses lately, you’ve probably seen pitches for blue-blocking lenses that supposedly cut down on eye strain and reduce sleep disruptions that come from using digital screens. But do they live up to the hype? Let’s take a look.

It’s pretty simple: Each blue light-blocking lens is tinted in a way that lets in more red and green light and less blue light. Usually, not all blue light is blocked, and the amount of blue light reduced varies depending on the type and manufacturer of the lens.

When you’re wearing blue light-filtering glasses, what meets your eyes is yellow-colored light (a combination of the red and green light that comes through). You’ll see the world with a more yellowish tint.

To determine the effectiveness of blue light filtering lenses, you have to separate various claims about them. One common claim is that they reduce eye strain while looking at screens on devices such as smartphones, tablets, and computers.

According to the American Academy of Ophthalmology (AAO), there is currently no scientific evidence that light from digital screens damages eyes or causes strain. In fact, the organization cites a recent study that suggests there is no reduction in eye strain with blue light-filtering lenses versus completely clear ones.

Instead, the AAO recommends reducing eye strain by reducing screen time and taking regular breaks while using your digital devices. 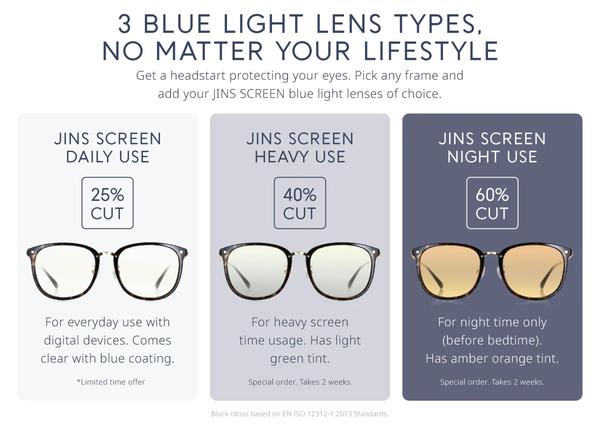 International prescription eyeware retailer LensCrafters claims that blue light can disrupt your sleep by preventing the secretion of melatonin, a hormone that naturally makes you sleepy.

A 2019 study backs up this claim somewhat. LensCrafters offers a solution, claiming that its blue light-filtering lenses can help prevent those disruptions. But luckily, in the study the company cited, the melatonin levels of the participants recovered to normal levels 15 minutes after they stopped looking at screens—no special glasses required.

The hypothesis behind artificial blue light’s sleep-disrupting nature is that the Earth’s natural day and night cycles regulate our internal body clocks, making us energized during the daytime when the sunlight is brightest and naturally sleepy at night when the light is dim. If you stay up late looking at your bright bluish tablet or smartphone, you might be sending the wrong signals to your brain, telling it to be alert when it should be getting sleepy.

However, if that hypothesis is correct, then you need exposure to both blue light and warm, yellow light to function properly throughout the day. It’s not a stretch to suggest that wearing blue-blocking lenses all day might prevent you from getting some necessary blue light exposure needed to help you feel alert. You might feel sleepy all day while wearing them.

RELATEDArtificial Light Is Wrecking Your Sleep, and It's Time to Do Something About It

So that means if you get blue light glasses, it might be best to wear them only in the evening. A recent systematic study suggested that blue light glasses do have a positive effect for people with insomnia when worn in the evening. But that study also suggests blue-blockers are most effective when worn specially as part of active medical treatment for insomnia instead of a 24-hour lens solution for your regular glasses.

And in the end, wearing prescription blue-blocking glasses might not matter because the lenses are not standardized between vendors, according to an article in the Harvard Heart Letter. That means there’s no guarantee that the blue light lenses you buy will block the right frequencies or amount of blue light to have any effect at all. Your mileage may vary.

A Cheaper Way to Eye and Sleep Health

With the mixed reputation of blue-blocking glasses, there’s a less expensive way to keep your eyes healthy. For eye strain, take breaks every 20 minutes while using a digital screen. And to prevent sleep disruptions from screens, experts recommend not using devices like smartphones, tablets, and computers 2-3 hours before bedtime.

If you do use screens at night, use a warm light filter such as Apple’s Night Shift or Microsoft’s Night Light, or Google’s Night Mode to reduce the amount of blue light coming from your screen. Also, if you like to read digital books at night, consider buying a Kindle. eReaders that use e-ink have screens that are easy on the eyes.

Easier on the eyes

A great night-time reader with an adjustable warm backlight.

Be Mindful of Health Fads

Anyone who has been around for more than a few decades has seen health fads come and go. Some of them involve gadgets, some follow new technology (like television and computers), and some react to blockbuster studies that are over-hyped and sometimes later contradicted.

The best time to be skeptical of a health claim that involves buying a product from someone who is not a doctor is when it’s a relatively new one. At the moment, the fad for glasses that block blue light is hot because frequent screen use in bed is a relatively new thing. In the years to come, the trend may pass as people find blue light glasses less beneficial than expected, or as the next tech innovation makes the scenario obsolete. Alternately, further scientific studies might support the beneficial effects of blue light glasses. Solid science takes time.

In the meantime, follow the advice of your doctor and try to do everything (including screen time) in moderation. Stay healthy!

READ NEXTBenj EdwardsBenj Edwards is an Associate Editor for How-To Geek. For over 15 years, he has written about technology and tech history for sites such as The Atlantic, Fast Company, PCMag, PCWorld, Macworld, Ars Technica, and Wired. In 2005, he created Vintage Computing and Gaming, a blog devoted to tech history. He also created The Culture of Tech podcast and regularly contributes to the Retronauts retrogaming podcast. Read Full Bio »
Prev
Next