It’s been well over two years since Microsoft unveiled the Surface Pro X, its first ARM-based PC since the ill-fated Windows RT-powered Surface RT and Surface 2. Since then, the Pro X has received two very minor refreshes. A year after the first one came out, there was a new one with an SQ2 processor. But while many Surfaces have seen full-gen upgrades over a new chip, the SQ2 was such a minor change that it was just considered a new configuration of the SQ1 model. The second update was a Wi-Fi only variant, lowering the price point for the tablet, where 4G LTE previously came standard.

Now, it seems that it’s finally time for a proper Surface Pro X 2, or at the very least, some new ARM-based Surface device from Microsoft. Spotted by WinFuture, Geekbench scores have appeared for a Surface device with a Snapdragon 8cx Gen 3. The results are mixed, ranging from 867 to 1,005 on single-core, and 4,748 to 5,574 on multi-core.

So far in the Windows PC market, we’ve seen the Snapdragon 8cx, Snapdragon 8cx Gen 2, Microsoft SQ1, and Microsoft SQ2. While they’re four different brands, they’re all essentially the same chip, with subtle tweaks to get a bit more performance in the newer ones. Even the so-called custom chips that Microsoft makes for the Surface Pro X are rebranded Snapdragon 8cx units.

The Snapdragon 8cx Gen 3 is a different story though. This is a properly new chipset, and we actually got to spend over a day with a reference device at Snapdragon Technology Summit in December. While I was definitely impressed with it, I wasn’t allowed to benchmark it, so this is the first that we’re seeing of that.

Now, let’s talk about how it compares to the rest of the market. Qualcomm compares its Snapdragon 8cx chipsets to an Intel Core i5, so in our testing, this is comparable to the 1,085 single-core score on the Core i5-1035G4 in the Surface Pro 7. It also beats the 969 single-core score of the Ryzen 5 4500U. Of course, these are all last-gen processors. Microsoft’s SQ2 and the Snapdragon 8cx Gen 2 both got around 800 for this. 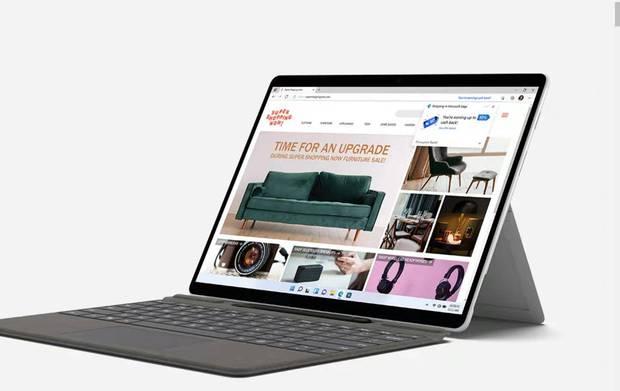 However, it’s worth remembering that Geekbench is an awful way of determining the performance of a processor or a laptop as a whole. The benchmarking tool only tests the CPU, and its single-core and multi-core performance. A really great example if Apple’s M1 Max chipset, which scores comparably to Intel’s 12th-gen H-series processors on Geekbench, but still comes out far ahead of the competition when doing actual tasks like rendering video. That’s because there’s so much else to consider, such as graphics, memory, an AI engine and how that elevates tasks, and more. Geekbench is just used commonly because it runs natively pretty much everywhere, and the database is easy to use.

Devices with Qualcomm’s Snapdragon 8cx Gen 3 are expected to be announced at Mobile World Congress later this month; however, I wouldn’t expect to see a new Surface Pro X until what’s likely to be a spring Microsoft event. It’s unclear if the company still plans to rebrand the Snapdragon 8cx Gen 3 as the Microsoft SQ3, as it traditionally has. I had heard at one point that it might not, and just leave it with Qualcomm’s branding.

Qualcomm, on the other hand, has even bigger ambitions for later this year. What will probably be called the Snapdragon 8cx Gen 4 will be based on technology from the firm’s Nuvia acquisition, and it’s going to be better-suited to take on Apple’s custom ARM silicon.

Managing Editor for XDA Computing. I've been covering tech from smartphones to PCs since 2013. If you see me at a trade show, come say hi and let me ask you weird questions about why you use the tech you use.