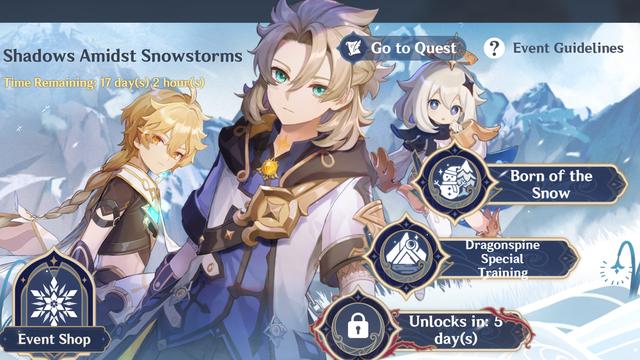 The Genshin Impact Shadow Amidst Snowstorms quest is the main event in 2.3. Need to find more Puffy Snowman Components? Or are you looking for help against the giant Whopperflower boss? We’re here to guide you through every Dragonspine Special Training challenge. Time to get your hands on the new Cinnabar Spindle Sword!

The Shadow Amidst Snowstorms event starts on November 25 and ends on December 13. The Event Shop will remain open for one more week after that.

Great news regarding the event requirements: this time, you don’t have to unlock the Inazuma region first. However, as Shadow Amidst Snowstorms takes place in Dragonspine, you do need access to this region. Furthermore, there’s an Adventure Rank requirement of at least 20, and you need to have completed the following Dragonspine quests:

If you want to know how to start the Shadow Amidst Snowstorms quest, you'll need to do the Shadow Amidst Snowstorms introduction quest: The Snowy Past before you can start working on your Puffy Snowmen. It’ll take quite a bit of time (somewhere between half an hour and one hour, depending on whether you skip dialogue), but you’ll learn a lot more about Albedo’s backstory.

You’re now ready to start the event challenges. The first one is ‘Born of the Snow’. The task is simple: go to the Puffy Snowmen locations on your Dragonspine map (click ‘locate’ in the event menu to see snowmen icons) and build them. 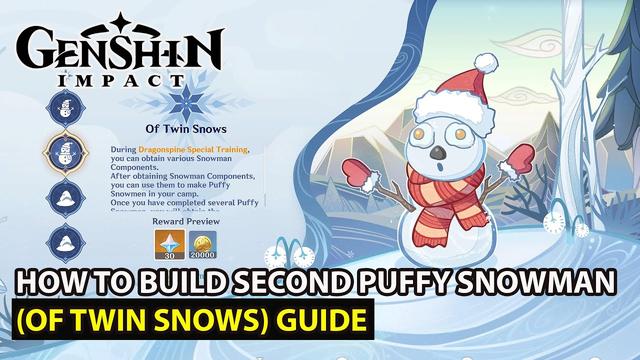 However, no need to visit these locations just yet. You first need to collect the Components by doing the Dragonspine Special Training challenges. It can be a bit confusing, as the only rewards you’ll see are Puffy Snowmen heads. The only Dragonspine Special Training that actually grants other types of Puffy Snowmen parts, is the Tracker Training (the second one). They’re inside the Crystal Piles.

Go to the Dragonspine map icon with the running man. Activate the red mechanism to start a speed challenge: follow the course as fast as possible and collect as many Insignias (gold coins) as you can.

While running, try to pick up the Blessings along the way. The Galespring Blessings (blue ones) increase your jumping ability, and the Ironskin Blessings (yellow) enable you to destroy nearby ice pillars. A few tips:

Go to the location indicated by the rock icon on your Dragonspine map. Your task is to melt all the Crystal Piles in the yellow area. The exact number is on the left side of your screen.

The Crystal Piles will melt when hit by Pyro, so don’t go through the trouble of collecting Scarlet Quartz. Each Crystal may contain a Puffy Snowman Component, but you’ll also find other materials and the occasional animal (that’s somehow still alive). A few more tips:

Go to the locations marked with a crossed swords icon on the map. Interact with the mechanisms (the Lures) to start the challenge. The basics are quite simple: defeat the opponents within the time limit to get the rewards.

However, the Lures will emanate frost, which buffs your opponents’ Cryo damage and increases your Sheer Cold meter. To counter this effect, you need to light up the three nearby lanterns using Scarlet Quartz.

This will change the Lures into heat sources, keeping you warm and restoring your Energy at fixed intervals. If you attack an enemy while carrying Scarlet Quartz, you’ll trigger a Pyro shockwave. A more few things to keep in mind:

Have fun building those Puffy Snowmen! As the third and final Shadow Amidst Snowstorms challenge will unlock in a few days, stay tuned for an update.

The final act of the Shadow Amidst Snowstorms event is called the Rise of the Fell Flower. To start the challenge, you first need to complete the corresponding event quest. Doing so will also award you with a special Serenitea Pot painting of Paimon.

Rise of the Feel Flower is a boss fight against a giant Cryo Whopperflower. It’s not enough to just defeat it though; check the event page to see the extra reward conditions. For example, you’ll get 120 Vanquisher’s Emblem (event currency), 2 Hero’s Wit, and a bunch of Mora if you defeat the Flower without allowing it to absorb Arcane Essence.

Here’s how you defeat the Rise of the Feel Flower boss: