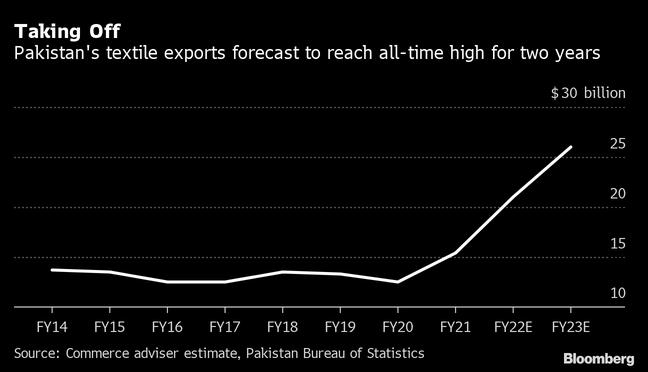 Pakistan’s Textile Exports to Surge as Orders Move From Rivals

Save(Bloomberg) -- Pakistan’s textile sector is bringing cheer to its flailing economy, with exports set to swell to a record after gaining an edge over South Asian rivals during the pandemic.

(Bloomberg) -- Pakistan’s textile sector is bringing cheer to its flailing economy, with exports set to swell to a record after gaining an edge over South Asian rivals during the pandemic.

Textile exports are poised to surge 40% from a year earlier to a record $21 billion in the 12 months ending June, according to Abdul Razak Dawood, commerce adviser to Pakistan’s prime minister. Dawood predicted that figure would expand to $26 billion in the next fiscal year, surpassing the nation’s total exports last year, he said.

The textiles industry -- which supplies everything from denim jeans to towels for buyers in the U.S. and Europe -- is one of the country’s few economic bright spots. Textiles amount to about 60% of Pakistan’s total exports and the nation allowed its factories to open ahead of India and Bangladesh when the pandemic first emerged in 2020, drawing orders from global brands including Target Corp. and Hanesbrands Inc. 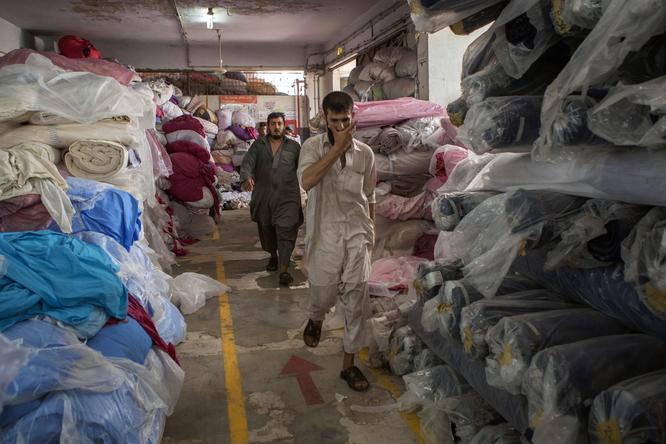 “A lot of orders actually were shifted from Bangladesh and India to Pakistan” during the pandemic, said Dawood in an interview at his Islamabad office. “The other good thing that’s happening is we are now becoming competitive with Bangladesh. Three, four years ago, Bangladesh was really beating us.”

The government also plans to announce a proposal next month that will likely provide incentives for exports to new markets such as Africa, South America and Central Asia, Dawood said. The nation is doubling down to boost textile exports through measures including tax breaks, cheap loans and supplying electricity at rates that are comparable with rivals in South Asia. A 60% decline in the local currency against the dollar since 2018 has also helped.

“Pakistan’s exports have become competitive over the past few years,” said Ahfaz Mustafa, chief executive officer at Ismail Iqbal Securities Pvt. “There is a fixed energy tariff regime that keeps in mind regional prices, the government is much quicker to refund the money it owes exporters and there has been a giant currency devaluation.”

The South Asian nation is looking to increase its exports to get out of its regular boom-bust economic cycles that have led it to seek an International Monetary Fund program 13 times since the late 1980s. It’s also trying to revive a $6 billion bailout program to meet financing requirements amid a record trade deficit.

Pakistan’s commerce adviser said there is “very little” that can be done about the nation’s record-high imports, which are driven mainly by purchases of petroleum products such as gasoline, gas and vaccines that are essentials. Pakistan will be “under pressure” if oil hits $100 a barrel, Dawood said. He does expect food-related imports to decline this year following a better domestic crop harvest.

The nation’s also pushing to intensify trade with Central Asia nations by signing agreements and allowing free movement of trucks. Trade has already grown to $120 million in six months of the current fiscal year from $14 million in the entire preceding year, he said.