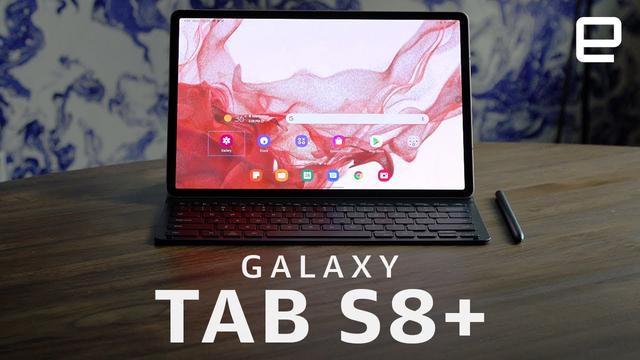 Samsung Galaxy Tab S8+ review: In a class of its own

There are two kinds of Android tablets: Samsung's Galaxy Tab S line and everything else. That's because while most Android slates don't rise above being simple media browsing and casual gaming machines, Samsung is doing more than any other company to transform Android into a true multitasking platform. And even though Samsung is approaching the limits of what Google's mobile OS can do, the combination of Dex mode and high-end hardware makes for a premium tablet that sits in a class of its own.

Without deviating too much from previous entries, Samsung has trimmed down its latest high-end tablet yet again, leaving the Tab S8+ with the slimmest of bezels. And measuring just 0.22 inches thick and weighing 1.24 pounds, the whole thing is very sleek. Meanwhile, there's a new Armor Aluminum frame that Samsung claims is 33 percent harder than what it used on the Tab S7 line. The Tab S8+ also has quad speakers with Dolby Atmos located on each corner of its chassis, so no matter which way you hold it, audio sounds rich and full.

The Tab S8+'s highlight feature is really its 2,800 x 1,752 screen, which delivers rich, punchy colors and a 120Hz refresh rate that makes scrolling through websites and flipping between apps feel smooth. My one complaint is that I really wish Samsung had opted for a wider 3:2 aspect ratio display instead of sticking with 16:10. 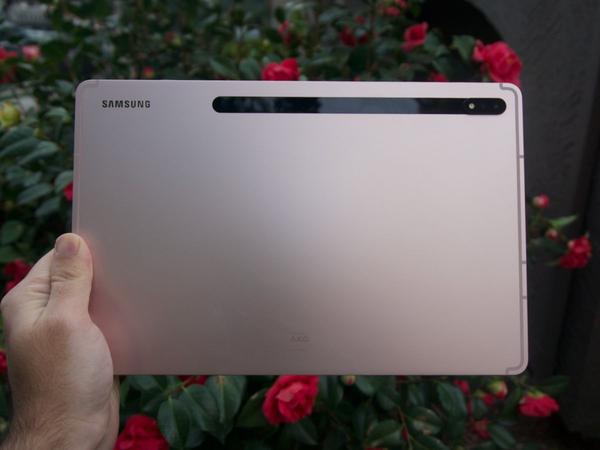 If all you do is watch movies or play games, 16:10 makes a lot of sense. But when it comes to productivity, the extra vertical screen space you get from a 4:3 or 3:2 display makes multitasking or having two windows open side-by-side a lot more usable. With Apple and Microsoft already having long since moved to 4:3 and 3:2 screens on iPads and Surfaces, I question why Samsung hasn't done the same.

The Tab S8+ also features good performance thanks to the inclusion of Qualcomm's Snapdragon 8 Gen 1 chip, along with 8GB of RAM and either 128GB or 256GB of storage. And, unlike Samsung's flagship Galaxy phones, you even get a microSD tray for additional storage. The downside is that there's no headphone jack, which is rather frustrating because it's hard to believe that Samsung really couldn't find room for a 3.5mm port on a device this big.

Finally, Samsung rounded out the Tab S8+'s design with a magnetic strip around back for charging the stylus; a strip of pogo pins on one side for attaching keyboard covers; and a speedy in-screen fingerprint sensor that outperforms side-mounted options.

While Android tablets at large are still waiting for Android 12L to receive a number of much-requested multitasking features, the Galaxy Tab S8 line has a custom solution in Dex. By touching the Dex button in the Tab S8's Quick Settings (or using a CMD + W keyboard shortcut), you can switch from the standard Android UI to a more powerful desktop-like view complete with a taskbar and multi-window support. There's also a system tray for easily accessing features like WiFi and Bluetooth connections, while the Android App Drawer is located behind a handy icon in the bottom left.

I used the Tab S8+ to write large parts of this review, and after booting into Dex mode, I found myself feeling almost immediately at home. I was able to snap windows to each side of the screen just like on a Windows PC, with the Tab S8+ also supporting a number of familiar keyboard shortcuts. You don't get the full range of commands that you would in Windows or macOS, but a number of the basics like Alt-Tab and Alt-F4 are there.

Now, I wish I didn't need to toggle between Dex and the standard Android layouts. And in less popular apps that haven't been optimized for the Tab S8's big screen, you can run into some clunky and awkward experiences, with apps that can't be maximized or games that don’t run properly in the background.

But for the most part, while it might take a little getting used to, Dex mode on the Tab S8+ does an admirable job of turning a traditional tablet into a much more powerful 2-in-1.

The other big selling point for the Tab S8 line is Samsung's included S Pen, which includes an expansive range of first-party drawing and annotation apps. By reducing the Tab S8's input latency from 9ms down to just 2.8ms, Samsung has essentially eliminated any sort of lag, and frankly, it feels fantastic.

Samsung Notes is your default choice for jotting down quick thoughts, while its handwriting-to-text conversion features allow you to save more legible copy for easier viewing later. And if you need more support for translating text, annotating slideshows or PDFs, or simply making funny doodles to send to friends, there are dedicated apps for that too. Samsung has all the basics covered out of the box, though if you're a hardcore artist, you'll find more sophisticated drawing and sketching apps on Apple's App Store.

The photography experience on tablets is often an afterthought because let's be honest, who wants to be the person pulling out a 12-inch device to snap pics at a concert or ballgame? So even though the Tab S8's cameras aren't anywhere near as good as what you'd get on a Galaxy S phone, Samsung threw in not one but two rear cameras that are more than serviceable. That includes a 12-megapixel wide-angle camera and a 6MP ultra-wide cam in back, as well as a 12MP selfie shooter up front. In bright light, images are sufficiently sharp and colorful, though you’ll start to notice noise creep in pretty quickly as the conditions get dimmer.

It's hard for a screen this big to not suck up a lot of juice, especially if you have the brightness turned up. But even so, the Tab S8+ posted a respectable time on our local video rundown test of 9:21, which isn't a far cry from the 10 hours we got from the iPad Pro. However, if you're playing games or multitasking, just be aware that you can drain the Tab S8+'s battery a lot faster than that. In more mixed use cases, I typically got closer to six or six and a half hours on a charge. Oh, and while the Tab S8+ does support 45-watt fast charging, you'll need to buy a power brick that supports those speeds on your own, because Samsung doesn't include a charger in the box.

The big question I've been asking myself is, compared to something like Lenovo's $630 P12 Pro, is the Galaxy Tab S8+ worth 50 percent more? And you know what, actually yes. That's because while they might have similar designs and screen sizes, the Tab S8+'s display is brighter, it has noticeably faster performance and its quad speakers sound richer and fuller. Little luxuries like its in-screen fingerprint reader make it easier to use on a daily basis. And Samsung's S Pen and stylus apps are more sophisticated than anything you'll find on a rival Android slate. It's just an all-around more premium device.

But what elevates the Tab S8+ above rival Android tablets is Dex mode. With the touch of a button, the Tab S8+ switches to a more desktop-like UI that makes multitasking and doing work actually a feasible idea, instead of struggling with productivity like you do on so many traditional Android tablets. In fact, the consumer version of the P12 Pro isn't even scheduled to get Android 12 until the end of March, let alone whatever happens to Android 12L.

Even so, despite all the work Samsung has done, the Tab S8 still isn't quite as powerful or accommodating as an iPad Pro or even a Windows-powered detachable like a Surface Pro 8. And with a total price of at least $1,000 once you factor in Samsung's keyboard cover, the Tab S8+ doesn't offer much in the way of savings versus Apple or Microsoft. But both of those devices run on different OSes, and depending on your situation, switching might be a nonstarter. That said, if you need support for Android apps but still want something suited for productivity, a Chromebook is also worth considering. But if you're dead set on a high-end multi-purpose Android tablet, the Tab S8 line should be at the top of your list.