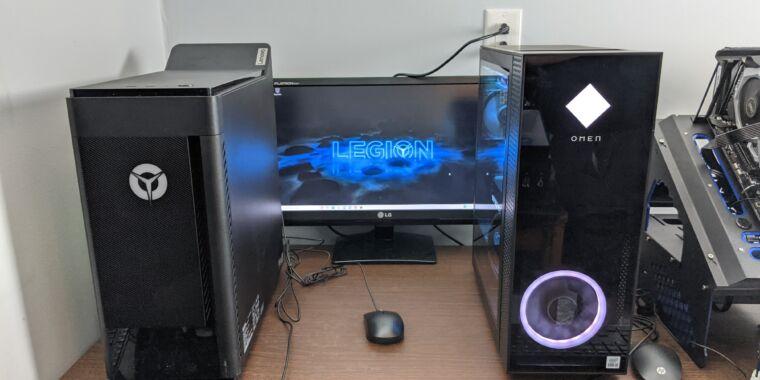 If you're planning to build a new gaming rig in 2021, we have bad news for you—that's going to be difficult to impossible, due to supply chain constraints imposed by COVID-19. But we also have good news: while you might not be able to build a gaming PC, you can almost certainly buy one.

Don't get us wrong. If you have enough time and patience, you can still amass all the parts to build your own custom rig from the ground up. But that could take weeks or even months at this point in 2021. So instead of selecting parts lists, our next System Guide will focus on recent rigs from three of the major pre-built gaming PC vendors.

HP and Lenovo provided us with an Omen 30L and Legion 5i Tower, respectively. We also wanted to review an Alienware Aurora R11—and although we weren't able to get a review unit from Dell, Senior Commerce Editor Jeff Dunn graciously took a few pics and ran some limited testing on his personal R11.

Even at the big OEMs, the hardware that is available currently changes from week to week. But armed with component performance charts and a thorough review of these systems, you can make your own well-informed buying decisions.

From $1000 at HP (Ars Technica may earn compensation for sales from links on this post through affiliate programs.)The HP Omen 30L and Lenovo Legion Tower 5i are mid-tower systems, a little on the large side but nowhere near "full tower" bulk. Each is significantly heavier than you'd expect from its size, but these machines are still well under anything you'd want to slap a "team lift only" sticker on. The Omen is slightly larger, but the Legion unfortunately makes up for it with an unnecessary whale-tail tacked onto the back-end for style. Each offers more than adequate cooling for the CPU and chassis, and each of them technically has plenty of room to work inside. We'll get more into that "technically" weasel-word.

The HP Omen 30L came to us with a fluid-cooled Intel i9-10900K CPU and a GeForce RTX 3080 GPU. The Lenovo Legion came with a more modest air-cooled Intel i7-10700 and GeForce RTX 2070 Super. Both systems (along with Dell's Aurora R10/R11) are at least theoretically configurable to whatever performance levels you'd like, but again, COVID-19-constrained supply and demand tend to limit your options unpredictably from week to week. 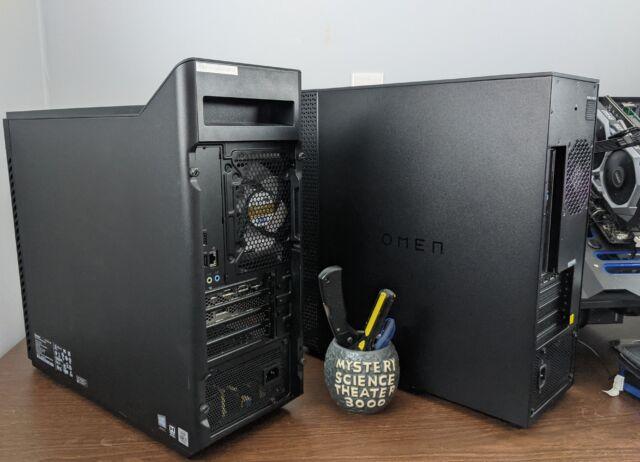 From $1580 at Lenovo (Ars Technica may earn compensation for sales from links on this post through affiliate programs.)We broadly expect similar performance from a given CPU and GPU combination coming from any given manufacturer. But there are some other variables that impact performance—particularly the cooling. Still, in our experience, these gamer-targeted rigs are unlikely to under-specify the cooling. That means the big things we're looking at here are the look of the system, how noisy it is, and what it's like to work on.

The Legion Tower 5i is generally quieter than the Omen 30L, despite the Omen's fluid cooler. Neither machine is loud in normal operation, but the Omen's fans have a slight rattly undertone. The Legion's fan noise did a much better job of fading imperceptibly into the background—I actually pressed my ear to the chassis the first time I powered it on to make sure it was booting.

From $920 at Dell (Ars Technica may earn compensation for sales from links on this post through affiliate programs.)A full Cinebench R20 run turns the normally well-behaved Lenovo and HP rigs into raging beasts that seem likely to lift off the desk under sheer fan pressure. But both machines stay quiet until the last third of the Cinebench run and go back to—as one Ars reader described it—"wabbit-hunting quiet" a few seconds later, even while running single-threaded Cinebench. Neither machine ramped up the fan noise at all during 3DMark Time Spy tests at 1440p, which are considerably more demanding than most AAA games.

I didn't have an Alienware Aurora R11 on hand, so I cannot compare it directly. Tom's Guide described it as loud and hot, which I wouldn't call either the Lenovo or HP rigs. I asked Ars Senior Commerce Editor Jeff Dunn to put his i9-10900K/RTX 3090 powered Aurora R11 through the same tests. During Time Spy, Dunn said his R11's fan speed increased significantly. He described it as easily audible from four feet away without being "brutal." It never went into the kind of raging beast mode that the Omen and Legion did during Cinebench R20.

By spinning up earlier and more aggressively than the Omen or Legion, the R11 manages to avoid accumulating enough thermal buildup to require emergency high speeds on the fans later. With its smaller cooling capacity, it probably doesn't have much choice in the matter. The Omen and Legion, with considerably higher capacity, gamble that extreme thermal spikes won't last long enough to require increased fan speed and noise. The fact that they don't spin up until the end of a Cinebench run—and return rapidly to idle afterward—argues that they're correct about that, too.

Users who prefer the R11's "a little more fan now, a lot less fan later" style tuning can adjust the fan curves in either of the bigger systems to match—which would be a very good idea indeed, if you plan to use your gaming system for long-term 100 percent CPU output like protein folding, hour-long compilation jobs, etc.

If bling is your thing, HP's Omen 30L mid-tower is ready to be your favorite rig. HP didn't miss a chance to glow up any individual part of this system, and the result is a gaudy but pleasing discotheque vibe that just needs you to add some bass. The HyperX RGB RAM glows its way softly through the rainbow on a loop, the chassis intake fan and Omen diamond logo on the front throw pearlescent light out into the room, the GPU announces itself with more LEDs, and even the fluid cooling system's radiator has rope LEDs wrapped around it.

That level of ostentation isn't to my personal taste, but the overall effect is well done. The light from the system's various elements melds together nicely, producing a soft, cool glow that feels sci-fi-movie cool.

Next to the Omen 30L, Lenovo's Legion 5i seems pretty restrained. The Legion 5i has a yellow-tinted glass side panel, but the only light-up component inside is a custom GeForce RTX 2080 Super GPU cap. A large Legion logo on the front of the case appears white and unlit—until the machine goes to sleep, that is. With the 5i in sleep mode, the big Legion logo flashes bright blue in a roughly six-second on/off cycle that I found both pointless and obnoxious.

I suspect that there's a control, somewhere, to change the behavior of that LED-lit Legion logo. But it didn't reveal itself to a casual search of the pre-installed Lenovo app in the system tray, and I didn't burn any more time looking for it.

The Alienware Aurora R11 is the plainest system of the lot. The only light-up bling on the R11 is a slim LED trim ring on the front and an "Alienware" branding on the right side; there's no side panel, and the entire exterior shell is plastic, available in "Dark Side of the Moon" (dark, charcoal gray) or "Lunar Light" (somewhere between pale gray and pearl). It's also the smallest internally—the R11 is a micro-ATX system, while the other two are full-sized ATX.