MSI has announced its MSI MAG Trident S 5M compact gaming PC, which is geared as a cloud gaming-based console alternative for your living room. Unlike some of the best gaming PCs, however, this configuration will ship not only without one of the best graphics cards, but with no dedicated GPU to speak of whatsoever.

That's right, there's no option available that includes a discrete graphics card, such as the RTX 3060 or RTX 3070. Instead, the MSI MAG Trident S 5M is relying solely on the popular AMD Ryzen 5700G APU. MSI appears to have high hopes for the system, with a press release claiming that it "reimagines the gaming experience". That's a bold claim for sure, so here's what we can discern from the news on what could be a new wave of graphics card-less gaming PCs following in its wake.

Is the MSI MAG Trident S 5M a console replacement?

While the MSI MAG Trident S 5M may be a similar size and weight to the likes of the Xbox Series One X, at least from what we can see, the ideology of this system is entirely different. The Trident S 5M isn't going to replace your PS5 or Xbox Series X games - rather, it's more occupied with delivering a powerful streaming box to your living room. Think of this machine as a beefed-up Nvidia Shield TV or Apple TV streaming box running traditional PC hardware inside. That's the best outlook we have on this machine, and we'll get into why below.

The MSI MAG Trident S 5M is being marketed primarily as a "machine dedicated to cloud gaming and mobile gaming", so MSI reports. This manta opens up a fair amount of possibilities as to what a gaming PC made for the living room can be in 2022, and could succeed where others have failed should the price be right. Unfortunately, that's the one thing we don't have official word on yet. 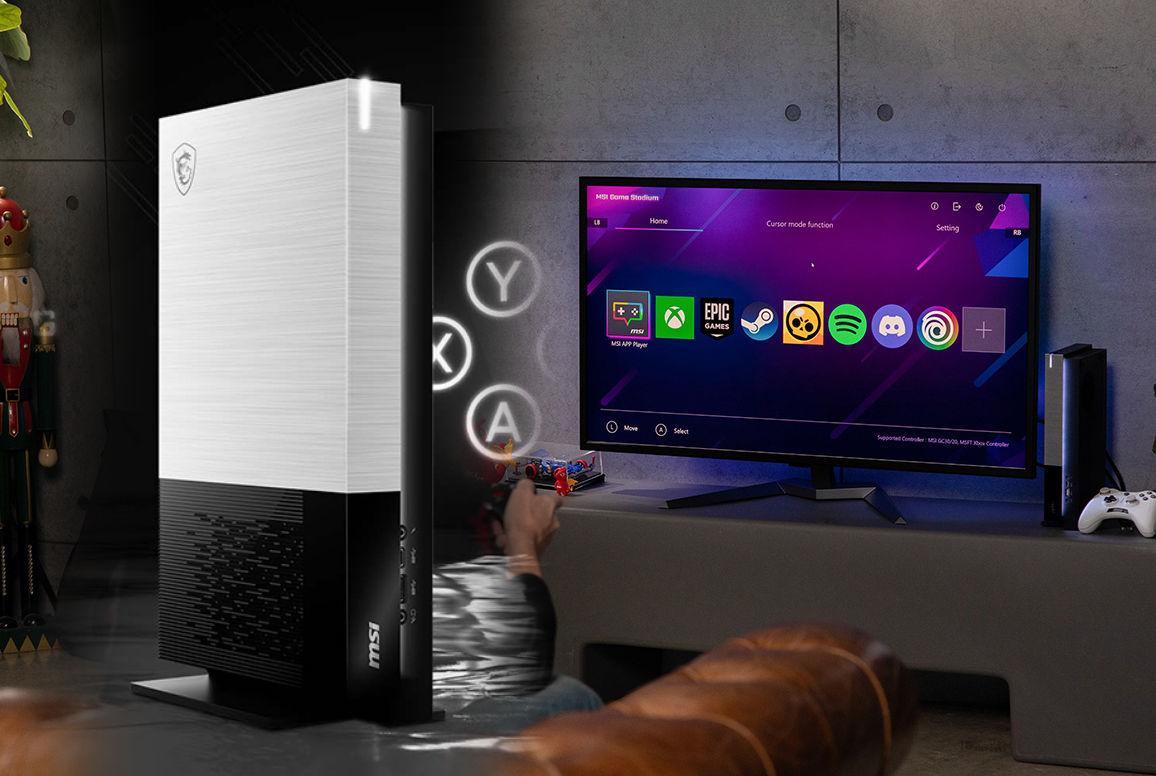 From what we could find on the MAG Trident S 5M's pricing online, German retailer Computer Universe is selling a configuration for €808 (that's roughly $890). This is a little on the steep side in our opinion. We've seen many cheap gaming PCs at this price point that are running dedicated graphics cards, such as the RTX 3050, which are more capable (at least on paper).

However, we'll cast a verdict once official US pricing is officially unveiled.

What we do know are the MAG Trident S 5M's specs, which are more than respectable. From what the official press release tells us, there will be three versions of the entry-level system available at launch running a different SOC (system on chip). The Ryzen 5000G Series has the honor in this case, and that's significant because of advancements made in terms of the Accelerated Processing Unit - think of them as a combination of both graphics and central processing working together in tandem. Options range from the Ryzen 3 5300G, the Ryzen 5 5600G, or the Ryzen 7 5700G, which will no doubt scale in performance and price in ascending order.

Deep diving into the MAG Trident S 5M's hardware also reveals a few interesting things about its power potential. For a start, there's support for 2x NVMe SSDs, as well as 1x SATA III SSD. Moreover, each unit will be fitted with a dual-channel DDR4 RAM kit clocked at 3200 Mhz, which isn't too bad either.

The two outliers to our eyes, however, especially as far as a PC marketed for the living room goes, are in the low PSU (120w adapter) and Wi-Fi 5. Ideally, Wi-Fi 6 would have made for far stronger, and more stable, wireless performance, especially in a box living near your TV without the need for Ethernet. While a huge amount of power is not strictly required, a little more under the hood would mean the integrated graphics processor could be pushed that little bit further as well.

What does the MAG Trident S 5M mean for cloud gaming?

We touched upon the MAG Trident S 5M running Wi-Fi 5, instead of the newer Wi-Fi 6, and that's our only major point of concern for a system with a core focus on cloud gaming. If you're wanting to stream titles from Xbox Game Pass, Nvidia GeForce Now, Amazon Luna, Google Stadia, or other services, then one thing is paramount above all - you're going to need a great internet connection.

Wi-Fi 6 has been the standard inside many of the best gaming PCs and best gaming laptops since its inception in 2019. Really, widespread adoption of 802.11ax support 802.11ax wouldn't have taken off until 2020, which makes the AG Trident S 5M's reliance on older tech questionable.

In terms of comparing Wi-Fi 6 and Wi-Fi 6, there's a maximum throughput of 9.6 Gbps with Wi-Fi 6 compared to Wi-Fi 5's 3.5 Gbps. That's quite the substance speed difference, and while unlikely to be leagues apart in real-world game streaming potential, you're always going to want more bandwidth to reduce the likes of lagging, ghosting, and input delay in-game.

Still, as long as you've got a stable internet connection of around 35 MB/s or higher then you're not going to run into many problems when streaming in Full HD from popular streaming services. We would always recommend being plugged in if possible, just to prevent any interference with the signal.

How good are Ryzen 5000 Series APUs for gaming?

Let's say you want to forgo the likes of cloud gaming or running Android games on your TV, as MSI's advertising advises. Just how competent are the likes of the Ryzen 7 5800G (the highest spec available) for running PC games natively? The performance may surprise you.

While you're unlikely to be blown away with the benchmarks from a raw numbers perspective, the figures are decently competent in some graphically demanding titles. For instance, we've seen benchmarks cranking out playable figures in the likes of Grand Theft Auto V at 1080p (with a 65 FPS average) as well as Doom Eternal (running at 48 FPS average). You're unlikely to crank sliders higher than medium (game dependant of course), but the fact that frame rates of 30+ are playable in visually impressive games is still certainly commendable.