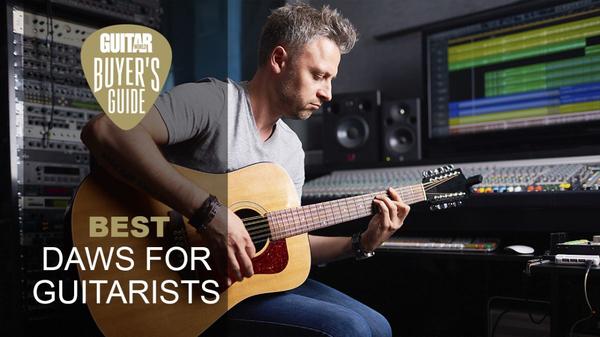 Whether you're looking to record YouTube pedal demos, original music or live shows, you're going to need one of the best DAWs for guitar players. Once upon a time DAWs (also known as digital audio workstations) were expensive and required a lot of specialist knowledge to use, but now they're accessible, ergonomic, and affordable, and there are options available for everything from your mobile phone to your laptop. Although some hardware is required, like an audio interface, studio-quality recording has never been easier for the average guitarist.

However, just because home recording is within reach doesn't mean the range of choices is any less daunting. There are DAWs available for every budget, including free options, and applications for both Mac and PC. In this best DAWs guide we'll go over several options to find which is the best one for you, and which ones make guitar recording a breeze.

Ableton was the first DAW to make a break with the metaphors of the physical studio. Focussed on beatmaking and live use as much as recording, it ripped up the recording software rulebook. In doing so, it provided a new, more ergonomic toolset for home producers that had never set foot in a real studio.

It turns out that many pros were looking for a change to a more ergonomic workflow too. The number of Ableton evangelists out there today goes to show what a revelation it can be. The session and arrangement view takes a minute to learn, but offers endless potential for composition, creativity and performance.

Ableton's built-in devices are of a high standard, and generally have an intuitive and streamlined user-interface. This means that you can get a long way before you need to even look at third-party devices. The downside is that these aren't available on all versions, and the full Ableton suite is not cheap. However, the built in guitar amps are as good as you'd expect, powered by Softube's amp emulations.

The most recent version of Live introduced some new features, but is more of an evolution than a revolution. There's some changes to the editing feature set, like multi-take comping, but the main changes are elsewhere. There's Note and Velocity Chance tools for generative music, and Tempo Following for live performance. Depending on what kind of music you make, these may or may not be of use to you.

Though its workflow is still linear, Logic Pro has been modernized in its most recent version. It now offers a viable alternative to Ableton for Mac users.

While it's not super cheap, the stock plugins are good enough to produce a professional-quality album. The amps might be Apple's own rather than a well-known third party, but they're no slouches, with decent guitar and bass models on offer. Not only that, but there's a comprehensive collection of stompboxes that can be routed in whatever way you see fit.

If you have another Apple device, like an iPhone or iPad, you can use Logic Remote. This allows for a huge amount of additional options in terms of interfaces, editing and performance. This works best with Ableton-style loops as part of the compositional and performance toolkit, which Logic now supports.

Finally, though it's more of a gimmick in our book, there are tools to mix in Dolby Atmos three-dimensional sound, ready for Apple Music.

It's fair to call Pro Tools an industry standard given its pervasiveness in professional studios, and its prolific use by professional producers and engineers. In recent versions, it has been modernized to bring better flexibility for looping and compositional use. Still, it's heavily bound by the metaphors and physical hardware and workflows of the traditional studio. It's meant to be familiar for power-users used to the feel and tooling of a real studio.

This means that, for the less-experienced or home user, it may be like bringing a cannon to a knife-fight. Not only is it over-powered on the whole, but, well, a cannon is a lot more complex to operate than a small pointy thing. So it is with Pro Tools - the learning curve is steep, and the payoff may be features that are not needed by most users.

However, if you do have aspirations to work in other studios, Pro Tools is a useful skill. Whether it's for other people, or your own music in somebody else's studio, knowing the lingua franca may be worth the investment of time and money.

Steinberg were the originators of the VST (Virtual Studio Technology) format for plugins, and they've been at the leading edge of DAW technology since. In practice, this means a rock-solid, battle tested platform with very good stock plugins, especially on the more expensive versions. Their Amp Rack VST is as good as any other stock amp pack, and there's the ability to create complex virtual signal chains too.

The downside of Cubase is pretty simple – it's still geared around linear recording and editing. However good its feature set is for recording and mixing, it's more limited as a compositional or performance tool than Ableton or Logic.

Reaper has a full evaluation version which you can try before committing to, and a licence key is the cheapest on this list. Its stock plugins aren't the best available, but if you're going to buy third-party plugins anyway, it's an excellent platform to produce on top of.

Crucially, if you're on Linux, then your two main options will be Reaper or Bitwig. Your choice will depend on whether you prefer Bitwig's more Ableton-style flow, or a more traditional, linear recording and editing experience.

Garageband isn't quite a music toy, but it's not quite pro-level either. For sequencing demos and simple loops, it's more than powerful enough, with a decent spread of core functionality and the Drummer automatic accompaniment feature built-in.

Once you get to the edge of its feature-set, the limitations become apparent quickly. However, for learning the basics of making music in a DAW and getting used to the workflow, Garageband is excellent.

As you'd expect, the desktop edition is compatible with the iOS version. A more pleasant surprise is that files are compatible with the full version of Logic Pro, meaning that there's a built-in upgrade path once you hit the limitations of the software. This also means that any time spent learning the idioms of Garageband aren't wasted when you move from newbie to practitioner.

How to choose the best DAW for guitarists

So, the bottom line is that every DAW will support recording guitar. All you need is a decent guitar audio interface.

Some will offer better out-of-the-box tools for guitarists, like amp sims or stompbox models. Others have presets for general-purpose plugins that lend themselves well to guitar. However, as you get more experienced, and especially if you desire professional results, you are likely to buy external plugins to cover things like amp sims, reverbs, and Impulse Responses (IRs). Check out our guide to the best guitar VSTs for a deeper dive.

What this means is that in practice, the workflow patterns and ergonomics of the DAW are much more important than what it ships with. The most important thing is being able to learn the internal logic of the workflows to use the tools available in the DAW. Once you have this feedback loop going, the DAW will feel like a natural part of your creative process.

Are there any free DAWs or free trials?

Of course, what 'clicks' with you will differ from person to person, which is why it's worth trying several DAWs if possible. Most of those listed here have a free trial or evaluation version. This will allow you to play around with demoing a track, to see whether the workflow suits you.

What computer system do you need to run a DAW?

The final thing to be aware of is that modern DAWs are pretty heavy-duty in terms of RAM and CPU requirements. You should check what the recommended specs are versus your current rig. Computers are powerful enough now that previously unheard-of things, like leaving plugins on while tracking, are possible.

That said, it's still true that plugins in particular can quickly burn through the available resources of your machine. As a result, it's worth having a decent buffer available of both RAM and CPU on top of the vendor minimum listed specs.