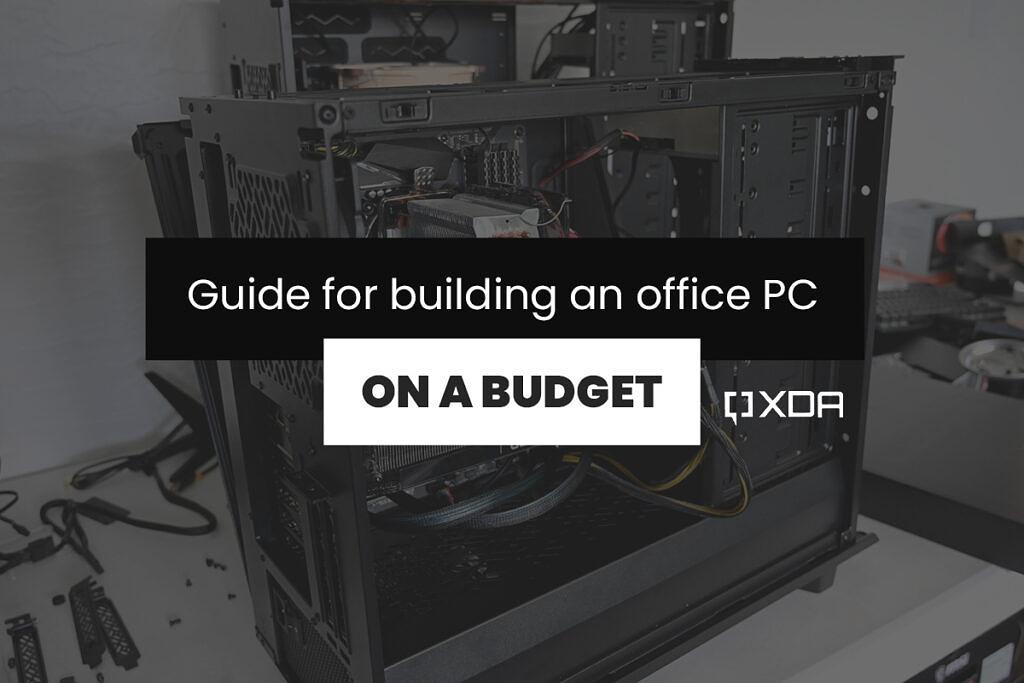 Budget home/office work PC build guide: These are the best parts for a $450 build

It’s no secret that building your own PC is more difficult than ever due to the state of the PC component market right now. An unfortunate combination of production problems and high demand has led to a massive shortage of PC components. It’s tough to get your hands on a lot of parts including graphics cards, memory kits, and more. That being said, you can still build a potent computer for day-to-day productivity workloads. In this guide, we’ll tell you the best PC parts you can pick up right now on the market for a solid budget home/office work PC build.

The parts we’ve picked for this particular build are all readily available on the market, which means you should have no issues buying them online or at retail stores. This build will cost you under $450, making it a really good option to consider if you’re looking to finally set up a home/office workstation in 2022. So without wasting any more time, let’s get started with this build!

For the CPU, we’ve picked the new Intel Core i3-12100 processor which is part of the company’s new 12th-gen Alder Lake lineup. The 12100 comes with four cores and eight threads with a max turbo frequency of 4.3GHz. This particular chip doesn’t have the hybrid combination of P-cores and E-cores, but we think the four P-cores will be able to handle just about anything you’d throw at it, just like a lot of other options in our best CPU collection. While something like the Core i5-12400 processor may seem like overkill for a home/office work PC, we think the Core i3-12100 is perfectly viable for this build. You can also step down to one of the previous-gen or older CPUs like the Core i3-10100, but we think it’s best to pick one of the new chips with support for DDR5 memory and PCIe Gen 5.

You can also go the AMD CPU route to settle for one of the previous-gen chips like the Ryzen 5 3600 or a low-powered unit from the AMD Athlon series. However, we managed to retain the Core i3-12100 for this build along with other compatible components for around $450, which is the budget we originally set out with. This PC will be powerful enough to set you up well for many years to come. Not to mention, this configuration can also be upgraded into a more powerful machine in the future by just adding, say, a graphics card and high-speed RAM. It’s worth pointing out that we’re not using a graphics card for this particular now build mainly because the 12100 comes with integrated graphics that’s powerful enough to power through the day-to-day productivity workloads without any major issues. 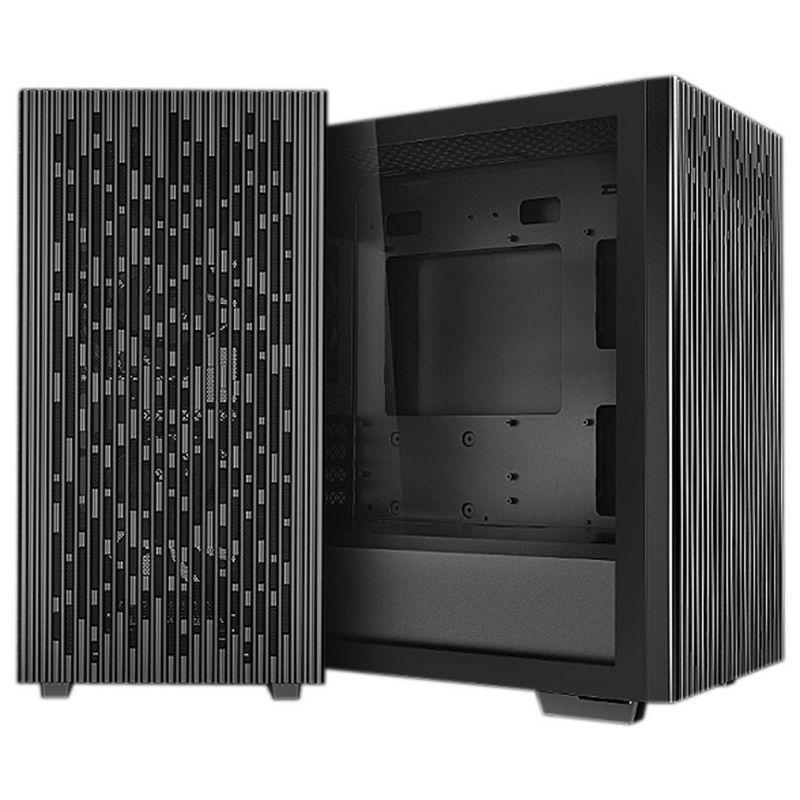 For the motherboard, we’re using one of the newer mainboards based on Intel’s new 600 series chips. The B660 chipset brings more affordable Intel motherboard options to the market for those who are looking to build with Alder Lake CPUs. The ASRock B660M Pro, in particular, is a fantastic board for entry-level Alder Lake builds. Sure, you can buy more affordable motherboards for Alder Lake but the ASRock B660M Pro works well with the 12100 and keeps the upgrade paths open for the future. This motherboard supports DDR4 memory modules, which means you don’t have to worry about spending more or waiting to get your hands on the newer DDR5 RAM kits. It also has two M.2 sockets and offers a good selection of ports including HDMI and DisplayPort. It’s worth pointing out that this motherboard isn’t designed to power through a high-end build with, say, one of the unlocked Alder Lake chips, so it’s best to keep your expectations in check. The ASRock B660M is an mATX motherboard which means you might want to pick up a standard ATX version of the board if you have a bigger case.

We decided to pick GSkill Ripjaws V as the choice of memory for this build mainly because of its reliable performance. For $60, you’ll essentially get two 8GB stick with DDR4-3200 speeds. The G.Skill Ripjaws, in case you don’t know, are tried and tested modules and they’re already a part of our collection of the best DDR4 RAM kits you can buy on the market right now. These reliable sticks can be used for anything ranging from a mid-tier productivity machine to relatively powerful gaming PCs too. You can always pick up relatively less powerful sticks to save some more cash, but we decided on these Ripjaws sticks mainly because both our motherboard and the CPU supports DDR4-3200 speeds.

The Western Digital Blue SN550 has been the go-to budget M.2 SSD of choice for quite some time now, so it’s no surprise that we’re adding it to this build too. This is perhaps one of the most affordable and reliable SSDs on the market right now. It works well with a variety of different platforms and is one of the best ways to add faster m.2 storage to your system. You can also choose to save some cash here by opting for a SATA drive instead of M.2 drive, but we think the $60 SN550 is an absolute no-brainer. It works as a fantastic boot drive for windows and all your day-to-day applications that you’d need for your work.

Based on the parts we’ve picked for this particular build, we think a 550W PSU should be plenty to power the entire rig without any issues. As such, we’ve picked the Thermaltake Smart BX1 550W as the PSU of choice for this build. This particular PSU offers a reliable 550W of power to the PC and it comes with an 80 Plus Bronze efficiency rating, which makes it better than a lot of other budget PSUs out there. The only real drawback of this PSU is that isn’t fully modular, which means you may have some trouble while building the PC. Well, that’s the small trade-off when you consider its affordable price tag. You can always step up something that’s better like the Corsair RM550x PSU, which is a fully modular power supply unit that comes with an 80 Plus Gold efficiency rating. There’s no shortage of power supply units on the market, but be sure to pick a reliable option as the PSU can essentially make or break your entire system.

The Deepcool Matrexx 40 is a $50 PC case that represents the best of the affordable PC case market. Despite the cheaper price tag, the Deepcool Matrexx 40 has a lot of things going for it including spacious internals with plenty of clearance for all the components, an airflow design, and more. This particular PC case also comes with mesh filters and a case fan pre-installed out of the box for just $50. Sure, you can step down further to buy a very basic PC case for as little as $30, but we think the Deepcool Matrexx 40 is a solid case that can also be used in the future should you plan to upgrade your rig. This mid-tower PC case can easily accommodate our mATX motherboard of choice too.

Here’s a quick look at the price summary of the budget home/office work PC based on the parts that we’ve picked for this build. It goes without saying the prices are subject to change based on the stock availability.

Note: We haven’t included the cost of case fans in the price summary, but you may need them depending on the choice of the case. The Deepcool Matrexx 40 PC case, for instance, comes with one pre-installed case fan which means you’ll need at least two more to maintain an optimum airflow within the case to maintain the thermals. The number of required case fans depends on the choice of the PC case, and luckily they don’t cost a fortune as long as you stick to affordable ones.

We recommend having a $10-$15 overhead cost for the fans. The same is true for thermal paste solutions too. You may not need it as most CPU coolers come with pre-applied paste, but it’s best to pick up a syringe of thermal solution for a fraction of the price. You can check out our collection of the best thermal paste solutions to find some reliable and affordable options.

In addition to the high-performance fully unlocked parts, Intel’s Alder Lake lineup also includes a handful of low-powered entry-level chips for basic builds. The Intel Core i3-12100 is one of the low-powered parts which we think is a fantastic entry-level CPU. The 12100 chip offers impressive performance over a lot of other older Intel and AMD counterparts. Pairing it with one of the more affordable B660M motherboards, we were able to put together a productivity work-horse build for just a hair over $450.

The lack of discrete graphics cards shouldn’t come as a surprise in this price range, but it’s also not a deal-breaker, especially for a budget-centric productivity machine. The Core i3-12100 carries its own integrated graphics which we think is plenty to keep things running. This may not be the most powerful PC out there, but it will last you longer than a lot of other builds using one of the older CPUs. Not to mention, it also keeps the upgrade paths open with support for DDR5 memory and PCIe Gen 5 support. Feel free to let us know your thoughts by dropping a line in the comments below. Alternatively, you can also join our XDA Computing Forums to discuss similar builds or get more product recommendations from the experts in our community.