Portable power stations are unlocking tons of new ways for humans to play, work, create, and relax. They take the power of lithium-ion batteries, compress them into a portable form factor, and roll it all together with inverters and a battery management system.

Upstart Travor is pushing into the portable power station space with a range of new offerings on Kickstarter that add a svelte design and user interface that fits right into the modern design palette. Travor sent us their 577 Wh YesMeta Portable Power station that puts out up to 1800 watts of peak AC power and 600 watts continuous.

The back of the Travor YesMeta features an integrated LED light, a second display, and a few 12 volt charging ports. Image credit: Kyle Field, CleanTechnica

Disclaimer: Travor provided the YesMeta to the author free of charge for the purposes of this review.

The YesMeta is a medium-sized power station that’s perfect for a wide range of applications. It provides far more storage capacity and power output than you need to simply keep your phones and devices recharged, though it can still easily do that. With 577 Wh of storage and 600 Watts of continuous power output, it can easily power lights, phones, cameras, drones, TVs and more in a recreational vehicle.

It sets itself apart from the pack with fast charging technology that boasts the ability to recharge from zero to eighty percent in just 45 minutes. That’s not quite supercharging speed, but it’s darn close in the world of portable power stations. The charging curve tapers off slightly at eighty percent, as is common with lithium-ion batteries, reaching a full charge in seventy minutes. 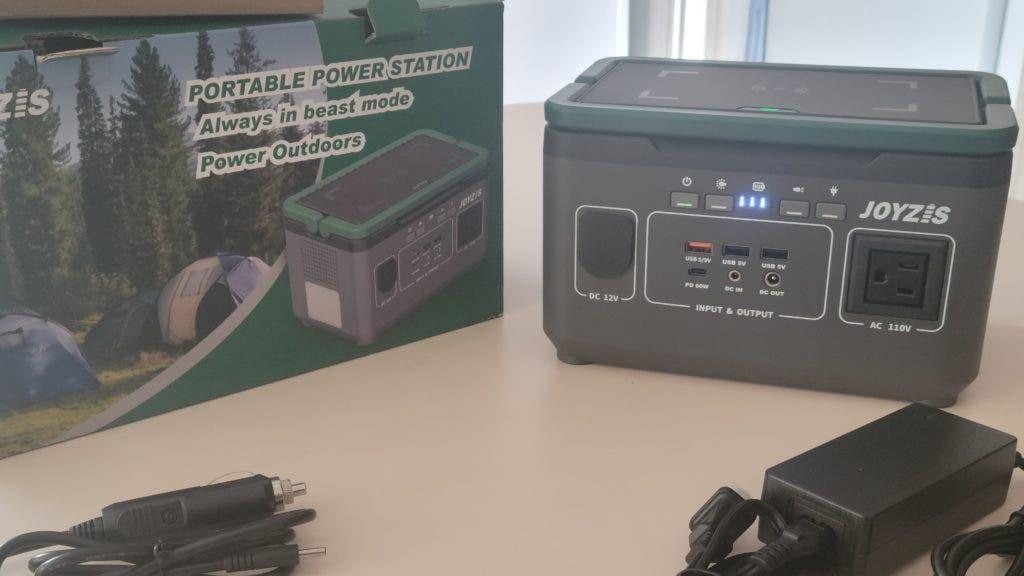 We drained the YesMeta with some serious repeated heating, waiting a few minutes for the fans to stop running between tests so we could give the fast charging a go. From zero percent, the display indicated it would take 78 minutes and true to form, it topped off and stopped charging just as the timer wound down.

We put it through a range of tests and found that it is more than capable of powering these smaller, lower draw devices and even managed to power our 800 watt water kettle. Our Bodum hot water kettle is a staple kitchen appliance for us around the house and on smaller camping trips as we use it for coffee, oatmeal, soups, dried all in one meals, fresh ramen noodles, and more. It typically pulls 800-830 watts so I figured the YesMeta would be able to support it for a short time, so I plugged it in and let it run.

The display on the YesMeta showed 440-450 watts being pushed out and surprisingly, it was able to keep the Bodum running until the water was hot. I plugged in a PS4 Slim, a Samsung Galaxy S8, and a Sonos speaker along with the hot water kettle to push on the unit even more, with the power output fluctuating from 460-480 watts. Doing a solo run of the hot water heating test drained the battery from 66% to 46% for a single pot of cold water but importantly, the YesMeta just kept chugging along.

With this extreme stress test, the cooling fans inside the YesMeta kicked on and kept running for several minutes after the test to keep everything cool. They aren’t quiet and sound like a pair of smaller computer fans when the unit is working hard, cranking the fans up to the max.

We love these portable power stations first and foremost because of the ability to add solar panels to them, store up the sun’s energy, and use it back whenever and wherever you need it. The Travor YesMeta comes from the factory with an Anderson parallel cable that can be used to juice it up with power from a solar panel (or two with the included Anderson splitter adapter) or from the 12 volt connection in a vehicle.

The Travor YesMeta is a well thought out, beautiful portable power station. It makes a ton of sense for urban use and its 577Wh capacity puts it in the medium capacity category. It is well suited for use around the home for portable power or as an emergency backup unit in the event of a grid outage.

Travor is a battery company with experience building a variety of lithium ion battery products and it is exciting to see them moving into the portable power station business. They are launching an entirely new range of 4 portable power stations with varying storage capacities with a Kickstarter campaign right now. Depending on how far along the campaign is, there are some solid deals to be had.

The lack of a rugged exterior and shock absorbing rubber bumpers wouldn’t make it my top choice for outdoor use, though setting it up to recharge with a solar panel is a great option to extend its utility beyond the initial charge. It is comparable in size to some 1000 kWh portable power stations, but comes in lighter, at just 8 kilograms / 16 pounds. The MSRP feels like a solid value and is a bargain at its current Super Early Bird price of $399 on Kickstarter.

Appreciate CleanTechnica’s originality? Consider becoming a CleanTechnica Member, Supporter, Technician, or Ambassador — or a patron on Patreon.
Advertisement
Have a tip for CleanTechnica, want to advertise, or want to suggest a guest for our CleanTech Talk podcast? Contact us here.
Prev
Next