Core Keeper boss guide: How to find and beat every giant monster

Core Keeper bosses are the toughest challenge in the new Early Access co-op survival sandbox. For a tiny pixelated adventurer, bosses can pose a major threat, but with the right preparation and a few winning strategies you'll be able to overcome them and use their gems to power up the Core.

The first three bosses you'll face in Core Keeper are Glurch the Abominous Mass, a giant orange slime that spawns close to the starting area, Ghorm the Devourer, a massive insect that uses the underworld as its own private race track, and The Hive Mother, a fleshy, acid-spitting nightmare surrounded by tough organic walls. There's also a fourth boss, Azeos the Sky Titan, which can only be found and beaten once you've defeated the first three and activated the Core.

Below you'll find our Core Keeper boss guide, including how to find them, and the best ways to beat them.

Glurch is located pretty close to your starting point. As you explore further from the Core you'll occasionally hear a distant thudding. That means you're close to Glurm. Look for areas with high concentrations of orange slimes, and he's bound to be nearby in a large chamber.

Glurch is a big blob with a leaping attack, a bit like Spelunky's Olmec, and when you get within a few blocks of him he'll pop up into the air and try to land on you. He's capable of smashing through solid rock, so don't think ducking into a tunnel will save you. That said, if you flee far enough away he'll retreat back to his starting spot.

Don't get within 3 blocks of Glurch until you're ready to fight, or he'll aggro. Prepare by clearing Glurch's chamber of as much slime as you can using your shovel, because stepping in slime will slow you down. If there are any hostile spiky slimes hanging around, kill them first too.

Once Glurch starts jumping, either move away or run directly under him while he's in the air. It's very important you don't let him retreat all the way back to the rune circle he sits on, because he'll start healing the damage you've done. Each time he lands, rush up and hit him with your tin sword a couple times, then fall back before he leaps again. Crude bombs can also damage him, but only slightly.

As long as you move quickly and don't let him retreat back to his starting spot, you should be able to manage that battle without too many problems.

Finding Ghorm isn't all that difficult. Just start tunneling in any direction from the core and you'll eventually run into Ghorm's wide, slime-filled tunnel. That's because Ghorm is a mobile boss: It's constantly moving in a huge circle that surrounds the Core. Below you can see Ghorm's massive circular tunnel running around my map. 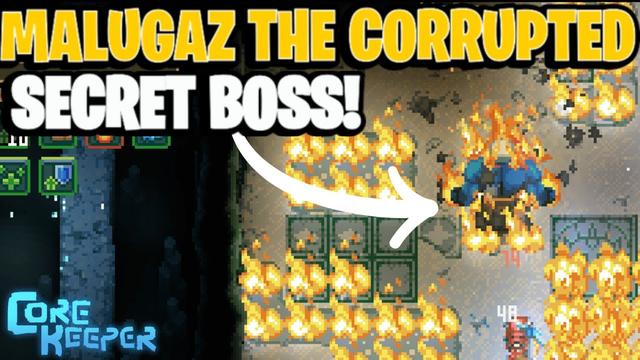 The real problem is stopping Ghorm. Even if you do some damage as it rushes past, it won't stop and by the time it circles around the map again it will have completely healed. Following Ghorm is difficult, too, because it leaves a slime trail behind it, and walking through slime slows you down.

The easiest way I found was using spike traps. Mine 50 units of tin ore in the Clay Caves, smelt it, and craft 50 spike traps at your crafting bench. Keep in mind: these traps will kill Ghorm almost instantly but the traps will be destroyed.

Head to Ghorm's tunnel and wait for it to pass by. Then quickly run into the tunnel and set your traps down in the middle of the tunnel. Kill any nearby slimes so they don't activate the traps before Ghorm completes its circle and returns.

If you don't want to use so many traps, another method is to clear slime from a long section of the tunnel with your shovel, then run ahead of Ghorm as it approaches, dropping as many bombs (not crude bombs, the bigger ones) in its path.

Wearing two swift rings and eating foods like a hearty pepper wrap will increase your movement speed enough that you can keep ahead of him. Once Ghorm's health meter drops below 50 percent, it will stop running its tunnel circuit and come directly after you. Sidestep when it charges and uses a weapon to strike it as it runs past. It will keep turning and coming at you, so you can drop more bombs in its path and strike its side while it passes.

The best way to find The Hive Mother is by using the Glurch statue at the core. There you can craft a Hive Mother beacon that'll add an icon on your map showing her location, provided you've already defeated Glurch.

Once you know where she is, you'll need an iron pickaxe, preferably two, to tunnel your way into her chamber, which is surrounded by durable larva walls.

Once you're in her chamber, she won't attack unless you attack her. Kill any larva or other enemies in the chamber and dig up any hive spike traps or acid blobs with your shovel.

The Hive Mother's attack is a powerful acid spit that targets you from above. When you see a target marker appear on your character, you need to move. Even if the acid misses you it'll remain on the block it lands on, and walking through it will hurt you. It can be removed with a shovel, but that's hard to do during the fight. The Hive Mother also summons minions from five spots around her, which will rush to attack you.

There's a good way to cheese this fight, which is to dig a long tunnel into one of the walls of the chamber directly across from the boss. Line it with spike traps that will kill any creatures that enter the tunnel during the fight. If you stand in the tunnel so you can still see the Hive Mother's body, but not her mouth, she won't spit acid. With the flintlock musket, you can shoot her from the tunnel.

It will take a few minutes, but it's an easy way to wear down her health while staying out of spitting range, and the narrow tunnel will make sure minions all approach from the same direction.

Another option is to build walls around the spawn points of Hive Mother's summons before the fight starts. The spots appear as five circular regions scattered around her:

If you wall those areas in, the minions won't be able to attack you and you can focus melee or ranged attacks on the Hive Mother while moving around to avoid her acid attacks.

Finding Azeos is a pretty complex undertaking. First you need to have defeated the first three bosses and used their gems in the boss statues to power the Core. Speaking to the Core will tell you to touch the Great Wall, the impenetrable barrier that lies further out in the world.

Once you've tunneled out and touched the Great Wall, return and speak to the Core again. It will give you a direction to tunnel towards (north, southwest, etc) which will lead you to a new biome, Azeos Wilderness. But to find Azeos the Sky Titan, you'll need to craft two items: a scanner showing his location on the map and a "large shiny glimmering object" (that's really what it's called) that summons him.

I haven't faced (or even found) Azeos myself yet but the video below fromGamingWithDaOpawill show you its attacks. Azeos uses power beams that cross the map in different directions or close in a circle around you. You can try dodging them but if you have a shield equipped you can also hold down the space bar to negate most of the damage.

Azeos also summons big blue crystals that heal him. These need to be quickly destroyed so forget about hitting them with a weapon and place bombs next to each crystal as they appear. A single bomb will destroy the crystal. While blocking the beam attacks and destroying crystals, use melee attacks with your scarlet sword to defeat Azeos.