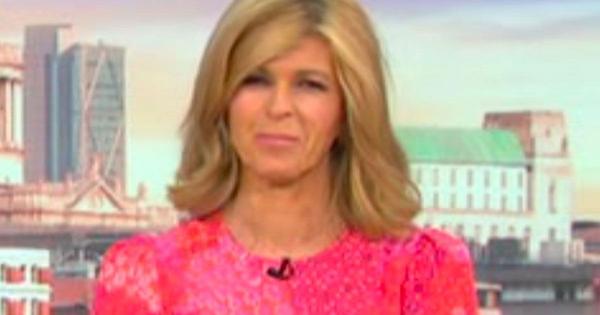 The 40-year-old told viewers she had left the party earlier than her colleagues, but that she then forgot to set an alarm to wake up in time for the early morning programme, noting Good Morning Britain’s producer rang her with a wake up call.

"I'm delivering sunshine, so that's the forecast, but I'm an award-winning forecaster this morning," she said holding up a trophy.

She continued: "Last night, team GMB were the winners of the ultimate news quiz."

Moments before Laura gave viewers the weather forecast across the UK for today, she left ITV viewers in hysterics as she showed the post-party snacks on her desk.

Laura held up a plate of chicken nuggets and ketchup to the camera and then tried to give a glimpse inside her Good Morning Britain mug, which contained Coca-Cola, but ended up accidentally pouring the drink over her desk as she tried to show it to viewers.

ITV presenter Ben Shephard replied: "Should we actually let Laura on live television? Has anybody cleared this?"

Co-host Kate Garraway replied joking: "Has anybody breathalysed her?"

The studio burst into giggles at the gaffe as Laura insisted she was "fine" with a cheeky grin.

Good Morning Britain fans were in stitches at the exchange and took to Twitter to joke about the spillage, with one writing: “I love how human Laura Tobin is.”

A fellow fan tweeted: “Pouring coke over the laptop,” alongside a crying laughing emoji, while another wrote: “Did Laura just pour coke over her laptop,” with another string of emojis.

A third chimed: “Chicken nuggets and coke for breakfast?! You're a legend Laura Tobin.”

Another tweeted: “This was so funny, Laura never change,” as another wrote: “Laura chucking coffee all over the desk.. I can relate,” with a crying laughing emoji.

This comes after ITV have announced that Kate Garraway will front a new weekend show in a schedule shake-up this spring.

The series will see the 54-year-old joined by friends and celebrities as she “starts the weekend in style”.

Kate and her guests will give viewers the “best start to their weekend”, ITV bosses say, with topics including the latest health and wellbeing tips as well as what to cook for your Saturday night TV dinner.

The shake-up is part of a new ITV weekend schedule to take the broadcaster into the summer, with famous faces hosting four brand new series for Saturday and Sunday mornings.