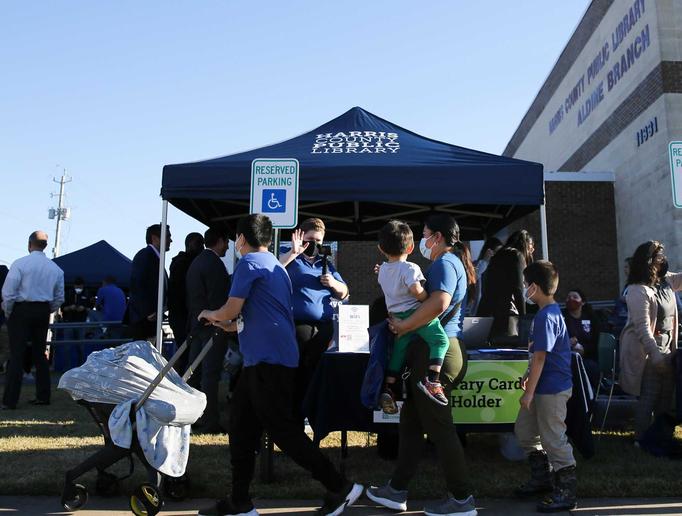 The family is among roughly 600,000 households in Harris County without internet connectivity, according to census data, something a new program from the county library system this month is beginning to tackle.

The Harris County Public Library launched a campaign Wednesday that will distribute 55,000 devices to residents in the greater Houston area who need online access.

The library’s “Internet Connect Campaign” will provide 40,000 wi-fi hotspots, which are mobile devices similar to modems that allow computers and other gadgets to connect to the internet. The campaign will also distribute 15,000 Chromebook laptops, all financed by a $25.6 million federal grant from the Emergency Connectivity Fund included in the American Rescue Plan designed to close the digital divide.

The grant represents the largest amount of funds approved so far for a library system in the country under the Emergency Connectivity Fund, according to federal government data.

“By providing adequate access to connectivity and technology, we are helping to improve the quality of life and strengthen our community in keeping with our mission of being a pathway to knowledge," said Edward Melton, executive director of the county library system.

The Reyes family was among a few dozen residents from Aldine that were in line outside the library waiting for their turn to check out hotspots.

“It's going to be a tremendous help for us,” said Dávila “We can study anytime from home now.”

Harris County Commissioner Rodney Ellis characterized the campaign as a “big deal” at the kick-off. He said “The program is enabling people to have access to virtual library services and pursue vital educational opportunities.” 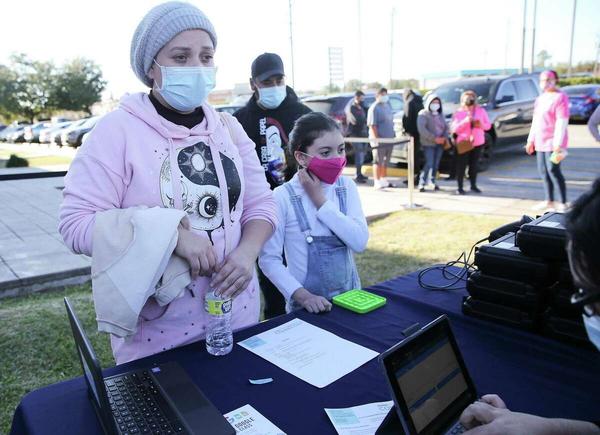 The Aldine library was chosen to start the distribution because the neighborhood is one of the largest pockets in the county with less internet connectivity.

“We have a high population of users here that really depend upon the library for connectivity, even more so than other branches in our library system,” said Carl Smith, branch manager at Aldine library.

Smith said that there have been periods before they closed the libraries due to the COVID pandemic in which “we’d have long lines of people waiting to get on the computer each day.”

As they reopened but at reduced capacity, “it’s common to see people coming and staying in the parking lot with their phones to get a connection” to the library wi-fi, said Megan Lemaster, the manager of the new program for the library system.

She said that after the announcement at the Aldine branch, the campaign on Monday begin systemwide in all the library facilities. Lemaster added that the distribution of free hotspots and laptops ends on June 30, although HCPL is exploring additional funding sources to extend the program.

Lemaster said the distribution is initially limited to the 5G hotspots, provided in partnership with T-Mobile. She said that the HCPL expects to receive the laptops in the next couple of weeks and check-outs will begin in early March systemwide.

To be eligible for the program and receive hotspots and laptops, people need to meet three criteria. One is having a Harris County Public Library Card, which can be done in any branch or online at the HCPL website. Another qualifier is not having a computer or device, excluding phones, that could be connected to the internet to utilize library services.

The other qualifier is “not having internet connection or not having one that is adequate,” said Lemaster. She explained that “it simply means that, for the purpose of this program, you don’t have an adequate connection if you cannot stream video” with quality.

Both the hotspots and laptops are provided as lifetime loans to the beneficiaries. To participate, people should go to an HCPL branch and complete an in-person application.