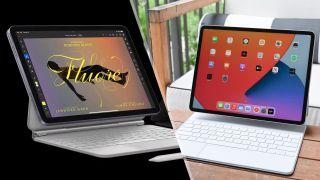 Apple's new iPad Air 5 may not look that different, but it’s what’s on the inside that counts. There are a couple of massive changes underneath its aluminum casing. These upgrades make the iPad Air 5 vs.iPad Pro (11-inch) a more challenging decision for premium tablet buyers as there is even less separating the two tablets.

While this is a face-off, I want to be clear that there is no universe in which the iPad Air 5 is the better of the two tablets; the iPad Pro retains several clear advantages as you would expect for a tablet that commands a $200 price premium.

While the iPad Air 5 may be cheaper, the storage situation is extremely frustrating and makes the iPad Pro 11-inch the better value.

The iPad Air 5 retains a virtually identical design to its predecessor, which in turn was modeled after the iPad Pro. Both offer that new squared-off look that dominates virtually the entire Apple lineup of devices now. It suits the tablet well with the thin bezels and minimalist design getting out of the way of the essential purpose of the iPad as a pane of glass that is a gateway to your apps and the web.

Far more impactful are the color options available on both tablets, and here the iPad Air gets to shine. The Pro is available in the familiar and pretty bland silver or Space Gray options. By comparison, the iPad Air gives you a rainbow of fruit flavors with pink, purple, blue, Starlight and Space Gray.

Although it’s not a visible difference, the biometric security methods are another differentiator. The iPad Pro uses Face ID via the front-facing camera whereas the iPad Air 5 relies on a Touch ID fingerprint scanner embedded in its elongated power button at the top edge of the tablet. Both perform quickly and reliably, but there’s no denying that Face ID is the easier option.

While both tablets feature USB-C ports, only the iPad Pro supports Thunderbolt 3 and USB 4. Both tablets have a magnetic holder on the top edge for charging and securing the Apple Pencil (2nd generation) accessory. Similarly, both support the Magic Keyboard and Smart Keyboard Folio. The iPad Pro gets an audio boost from its four speakers versus the two found on the iPad Air.

While the 11-inch iPad Pro doesn’t get the fancy Liquid Retina XDR display using mini-LED technology of its 12.9-inch sibling, it does have an amazing IPS panel with the adaptive 120Hz ProMotion technology. The iPad Air 5 loses out on ProMotion, meaning it is limited to 60Hz, but still boasts a beautiful Liquid Retina IPS display.

By far, the biggest consideration between these two models is ProMotion, that 120Hz performance makes for much smoother animations and allows you to watch or edit high frame rate videos. It should also positively impact battery life as it allows the panel to drop below 60Hz based on the content you are viewing, but again we’ll have to wait until we’ve run our tests on the new Air to find out. 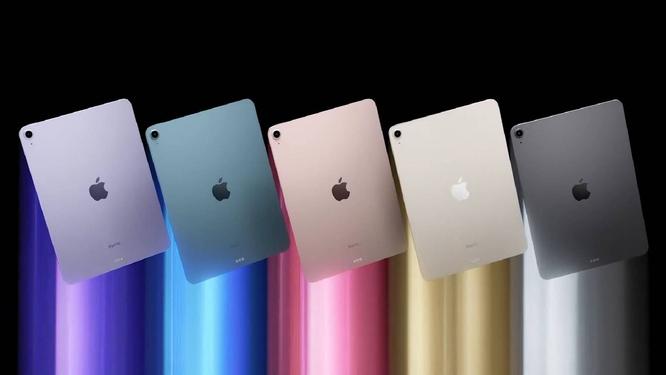 There are no meaningful differences to speak of here. The iPad Pro 11-inch and iPad Air both support the Magic Keyboard, Smart Keyboard Folio, and Apple Pencil 2. The Magic Keyboard is quite literally the same model for both, which may be relevant if you are upgrading an iPad Pro 2018 to an iPad Air 5.

You can read ourMagic Keyboard review if you are considering it for either tablet, but the takeaway here is that both tablets feature identical Apple accessories, which are pretty good, but also quite pricey.

This was a decisive slam dunk victory for the iPad Pro in the previous generation, but the iPad Air 5 is ready with the block now matching the Pro’s M1 processor and 5G radio. The 5G radios are identical, and both feature 8GB of RAM (the 1TB and 2TB Pro bumps up to 16GB of RAM), but there is one potential difference to be found in the M1 chips between the two.

Apple indicates that both feature M1 chips with an 8-core CPU and 8-Core GPU, but while the Pro is listed with a 16-core Neural Engine, the Air merely lists a Neural Engine. It’s unlikely this is an accident and suggests the M1 in the Air may be a slight step down in this regard. In our testing, we’ll have to see if this has a meaningful impact on any typical tasks.

Even if there is a slight hit to performance in some apps, the M1 has plenty of room to fall off and still crush every other tablet on the market.

On the Geekbench 5 overall performance test, the iPad Pro with M1 scored a 7,298, dominating the previous iPad Air (4,262, A14 Bionic). Safe to assume this Air will land at least relatively close to the new Pro. The M1-equipped iPad Pro took 22 seconds to add a color filter and transition to a 4K video before exporting it to 1080p resolution on the Adobe Premiere Rush test. The old iPad Air wasn’t a slouch at that either, coming in at 27 seconds, but again it should drop even closer to the Pro now.

Until we see our benchmark results come in, I’m calling this category a draw as the hardware is virtually identical.

This is another area where we will have to wait and see how our benchmark and real-world testing come through once we have the iPad Air 5 in hand. The iPad Pro lasted 10 hours and 48 minutes on the Laptop Mag battery test. By comparison, the iPad Air (2020) lasted for 10 hours and 29 minutes. It wouldn’t be shocking to see it close that gap or slightly surpass the iPad Pro, but either way, it’s unlikely that one will dramatically outperform the other.

Double the cameras, double the fun! Well, maybe not quite. There’s certainly an argument to be made for tablets to have cameras, but the reality is that most iPad Air or iPad Pro owners also have an iPhone in their pocket that will obliterate the results from these lenses in a form factor that makes sense for taking photos. But I digress.

By tablet camera standards, both are remarkable, and that hardware surpasses most of thebest budget phones and even stacks up against some low-end flagships. But are you really picking your tablet based on the rear cameras? The biggest differentiator on the back cameras for the iPad Pro is the inclusion of the LiDAR sensor for AR apps, but while the AR push continues, this isn’t something that is driving a tablet buying decision for most users.

The front-facing cameras are relevant for more users as an iPad is an excellent video conferencing device. The iPad Pro has an exceptional 12MP, f/1.8 front-facing camera with the same TrueDepth hardware found on the iPhone that can yield stellar Portrait mode photos. The iPad Air gets a nice upgrade to a 12MP sensor, up from 7MP, and also now features Apple’s Center Stage feature that tracks you during FaceTime calls.

The iPad Pro 11-inch takes the victory with four category wins to none for the iPad Air 5, but impressively the more affordable tablet battled its sibling to a stalemate in three categories. So let’s take a quick look at who should consider going with the iPad Air over the iPad Pro.

If you are on a tighter budget and want more than the standard iPad can offer, the base iPad Air 5 is the obvious choice. 64GB is a little tight, but you can make it work if you stick to mostly streaming content and don’t overload it with apps. With the updated iPad Air 5 hardware, you are getting the majority of the premium iPad Pro features except for a ProMotion display, dual-camera with LiDAR scanner, and Face ID.

If you have $800 to spend, the base 11-inch iPad Pro is the best choice. For a mere $50 premium, you get that ProMotion display, quad speakers (versus dual), better front and rear cameras, Face ID, the LiDAR scanner, and the 128GB of storage is a sweet spot for most users.

We’ll check back in on this face-off once we’ve wrapped up our review of the iPad Air 5 to see if it manages to move the needle on any of these categories. It’s safe to say that if you opt for either of these tablets, you are making a solid choice, as while theGalaxy Tab S8 made some interesting changes this year, Apple remains the tablet manufacturer to beat.