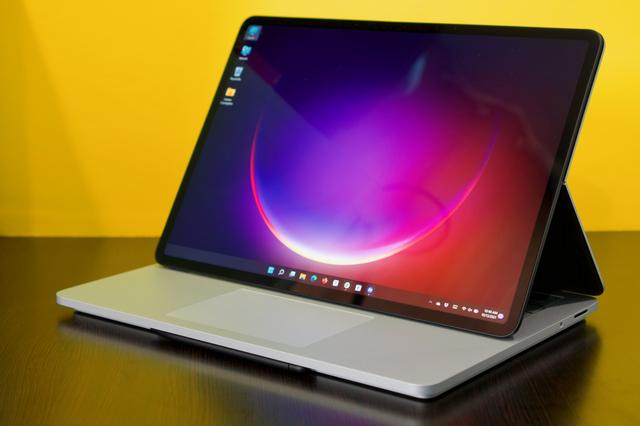 REVIEW: Walk into a graphic design office and you’ll see Apple MacBooks and iPads all over the place. Microsoft has tried to make an alternative to that with its “most powerful Surface yet,” the Surface Laptop Studio. And for the most part, it’s not very competitive.

Microsoft’s marketing will inform you that this is a laptop designed for “power users;” gamers, video editors, and creatives. The reality is, it’s not great for gaming and there are better Windows-based laptops out there for video editing.

The only area where it trumps the competition is when used by creatives that need a canvas-style laptop for drawing or graphic design. This isn’t a massive market, though.

Other than the adjustable screen, everything about the Laptop Studio is a bit boring and subpar. This is an expensive laptop with average performance capabilities, it has a very poor battery and a mid-range display.

READ MORE: * Pukekohe growers turn to artificial intelligence to improve water use * Microsoft Surface Pro 8 review: The best 2-in-1 on the market, held back by its price * A week with the new MacBook Pro proves one thing: I'm not worthy

As an answer to Apple’s market domination, it fails.

Compared to its competitors, the Surface Laptop Studio is an expensive device. With it’s mid-range RTX 3050 Ti graphics card and Core i7 CPU, it’s overpriced. The only thing you’re paying for is the adjustable screen.

The Laptop Studio is a sleek-looking device. From the outside it doesn’t have a very distinctive look but overall it looks nice.

What makes the design unique, is the ability to manoeuvre the screen into 3 different modes. There’s a standard Laptop Mode, Stage Mode, in which the screen comes towards the user covering the keyboard but leaving the trackpad available. And Studio Mode in which the display lies flat, more like a canvas or tablet.

While the ability to do this is unique and interesting, throughout my time with the device, I only ever used Laptop Mode. For me, Stage Mode was completely pointless. When watching a movie, or playing a game on a laptop, I’ve never found the keyboard so distracting that I wished I could bring the screen forward to cover it.

While I do think there’s a market for a 2-in-1 device that acts as both a laptop and a tablet, the Surface Laptop Studio is thick and heavy weighing 1.8kg. It’s simply too big to use comfortably in tablet form. I’m sure there are some creatives that will love Studio Mode as a canvas for painting and drawing, however I’m not convinced there’s a massive market for this.

For creative works, the Laptop Studio is at its best when paired with Microsoft’s stylus, the Slim Pen 2. It’s responsive, seamless and I especially liked the charging area for it. The Slim Pen 2 magnetically secures itself underneath the front hinge of the device and charges. I had worries that the pen would fall off, but it’s well-secured, unobtrusive and you’ll forget it’s there. Annoyingly the stylus doesn’t come in the box and has a standalone cost of $180, which is a significant amount when you’re already paying premium prices for this laptop.

Typing with the keyboard is fine. It’s well-spaced and has a nice spongy feel to it. The trackpad is responsive and accurate but I would have liked the click to require a bit more force as often I would mistakenly double-click due to its sensitivity.

The Laptop Studio has 2x Thunderbolt USB-C ports, 1x headphone jack and a Surface Connector port for charging. I was a little disappointed in the port selection. I loved the Thunderbolt capabilities for plugging in external monitors but I would’ve loved to have seen a USB-A port. Most laptops are moving away from USB-A nowadays though, so it was to be expected. 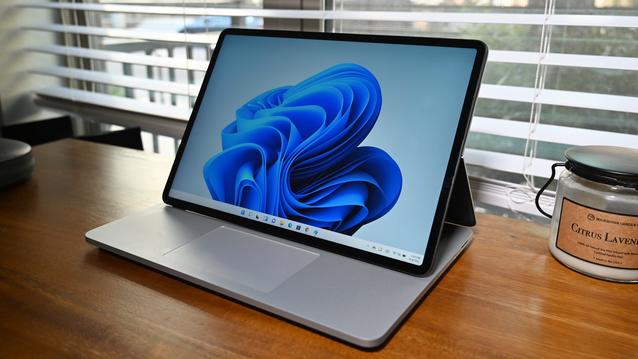 It’s a vibrant display, the colours look great and the 120Hz refresh rate makes it smooth to navigate. It’s certainly not the best display out there but it does a great job.

I’ve always been a fan of the 3:2 aspect ratio on Surface devices and that has remained here. It provides more vertical space for websites and windows and it makes the display feel large without adding to the laptops physical footprint.

I wasn’t a big fan of the large bezel though. It’s a dated style and takes away from the sleek, stylish design.

The Surface Laptop Studio is able to run multiple Chrome tabs, apps like Word and Photoshop and stream movies and Spotify without hiccups. But overall I was disappointed in “Microsoft’s most powerful Surface yet.” For a laptop at this price, I was expecting more.

Despite what Microsoft’s marketing tells you, The Surface Laptop Studio isn’t great for gaming. I achieved 25FPS playing Valheim on medium settings, and 40FPS on The Witcher 3: Wild Hunt. To get 40fps I had to play in half resolution at 60Hz and medium settings. It struggles to run games at full capacity, and I gave up trying to play them at 120Hz.

The Surface Laptop Studio wasn’t great for video editing either. It achieved a 5105 Muti-Core GeekBench 5 score. To put this into perspective the Dell XPS 15 achieved a score of 8001, the Razer Blade 14, 7459 and the M1 MacBook Pro 12713. It’s a long way off it’s main competition and these other laptops are similarly priced if not cheaper.

I enjoyed how quiet the Laptop Studio was when put under stress. The fans barely made a sound. I didn’t like where they were located though. Most laptops have fans at the back so hot air is blown away from the user. The Laptop Studio has them at the front, right where your wrists sit when typing. Hot air gets blown out the sides and you can feel it on your arm. Sometimes, especially when gaming, this air can get quite hot, it’s uncomfortable and an oversight from Microsoft.

The Laptop Studio boasts four internal speakers, 2 located on the sides of the device and 2 underneath the keyboard. I very rarely used the laptop without headphones but the audio was good enough for the occasional YouTube video or Spotify track if I misplaced my earbuds.

The battery on the Surface Laptop Studio is poor. Very poor. For a laptop designed for “power” users and productivity, it doesn’t compete with other laptops out there.

The poor battery is also affected by the lack of a Dynamic Refresh Rate. This is slated to be coming soon, but it’s not here yet. You can only set the refresh rate to 120Hz or 60Hz. This means if you want the most out of the display it’s running at 120Hz at all times and it drains the battery quickly.

Microsoft’s Surface Laptop Studio is a niche device made for a very small market. If you’re looking for a laptop that can turn into a canvas so you can paint, draw or perform graphic design easier, you’ll love this device.

But for almost everything else, whether it be performance, battery or price, there’s a better, often cheaper alternative.

This is a laptop that comes with a premium price and only produces mid-range performance. It struggles for gaming, there are better laptops for video editing and it has a terrible battery.

The laptops for creatives market is dominated by Apple. As Microsoft’s answer to that, the Surface Laptop Studio struggles to come anywhere close to the performance of the MacBooks. Sure the adjustable screen looks cool but in practice, performance and battery are more important and this device struggles in both categories.

If you want the best laptop for creative work you can’t go wrong with a MacBook. If you aren’t an Apple user and want a Windows 11 based laptop, there are many better alternatives to the Surface Laptop Studio like Dell’s XPS 15.