The MatePad (2022) is made by Huawei, but it’s been a struggle to review Huawei devices over the last few years. To distill all the complications of governmental sanctions and what no Google services mean into a star rating is clumsy at best. At MWC 2022 though, Huawei appears to be offsetting the cost of its lack of Google with great value in its latest slate.

Quickly adding context to Huawei’s predicament: Huawei products haven’t had access to Google Services in the West for a couple of years now – not Huawei’s choice.

This is a big deal on phones like the otherwise very goodHuawei P50 Pro – no Google Docs, YouTube app, Gmail, Drive, WhatsApp backups etc. On tablets, it’s still an issue, but a lot of these services can be more comfortably accessed through a browser than on a phone.

With the MatePad (2022) though, Huawei’s offsetting the remaining inconvenience of no Google services with affordability and impressive specs, not to mention a great accessory suite and smart styling.

Could Huawei have finally cracked this incredibly tough nut and made an easy to recommend tablet for the whole world to enjoy?

As for when the tablet will be going on sale, that is set to vary by region, so we recommend you check your local Huawei store or site. 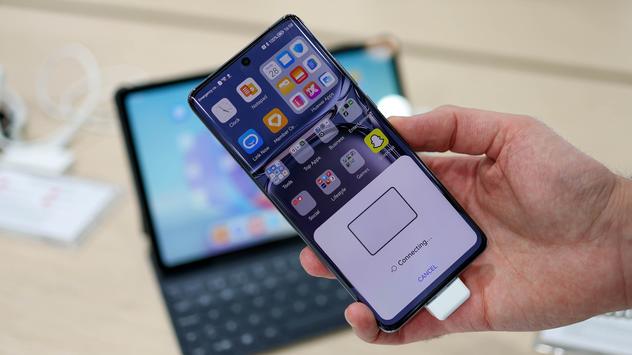 The MatePad (2022) feels very much like a distilled version of Huawei’s premium slates of old like theMatePad 11 – simple, slim, smart-looking, and all about the screen.

At just 7.35mm thin, the MatePad is skinny, though it feels solid and robust at 450g. It's still lighter than the new iPad 10.2 though, and while it isn’t made of the same premium metal as Apple’s slate, it looks fresher thanks to a more immersive, bezel-light display and its wide-screen aspect ratio.

The tablet features a power button and volume rocker, and there are four speakers dotted around the frame. The back is a smooth, matte sheet of plastic that curves inwards slightly at the edges, and you can pick the MatePad up in one color – Matte Grey.

As with most tablets, the MatePad’s body is a vehicle for that big screen, which measures 10.4 inches. The IPS panel is nice and sharp for the price, with a resolution of 2000 x 1200, which means a pixel density of around 225 pixels per inch.

At first glance, the screen looked crisp on the show floor at MWC, and its colors were also balanced. Expect a slightly washed-out picture when set alongside an iPad Pro or Samsung Galaxy Tab S7 Plus – unsurprising given the price difference.

The MatePad offers full support for Huawei’s second-generation M-Pencil, which means 4,096 levels of pressure sensitivity, so if you can get on with the note-taking and drawing software available for it, it will be a solid option for students and doodlers alike.

Running Harmony OS 2, the Huawei MatePad (2022) has a similar interface to theHuawei MatePad 12.6. While it looks and feels like Android, and it runs (most) Android apps and games, it’s also got a host of interface enhancements – superior folder management, a persistent, dynamic dock, and easier split-screen multi-tasking than stock Android.

However, what Huawei gives with one hand, US sanctions take away with the other, and unfortunately, the lack of Google services still affects the tablet. If you’re a big tablet gamer and use Google Play Games, rely on offline Google docs or Google Drive, or don’t fancy running YouTube through a web browser instead of through an app, then the MatePad won’t be for you.

Powered by a Kirin 710A chipset, the tablet features midrange power and seemed snappy enough in our time with it. If you’re enjoying a host of Huawei hardware in your life, it also works as part of Huawei’s Super Devices ecosystem. This means you can easily tie your phone, printer, and monitor into an interconnected tablet experience.

The Huawei MatePad looks like a great bit of hardware, and Huawei has also optimized its software to deliver a more intuitive tablet experience than stock Android. With fierce competition from previous-gen Samsung slates like the Tab S6 Lite, and the new iPad costing just a bit more, the MatePad may not be an obvious choice for many.

Despite not being an obvious choice, anyone who wants a wider screen than an iPad for streaming video – Disney Plus and Netflix have worked well on all the Huawei tablets we’ve tested, so it should do a great job as a media player. The tab’s also ideal if you’re happy side-loading APKs and using a web browser to access Google services.

With its competitive pricing, Huawei’s edging closer to overcoming the software divide between its tabs and much of the competition. In turn, you could quite happily think of the MatePad (2022) as a much more fully-featuredKindle Fire HD.