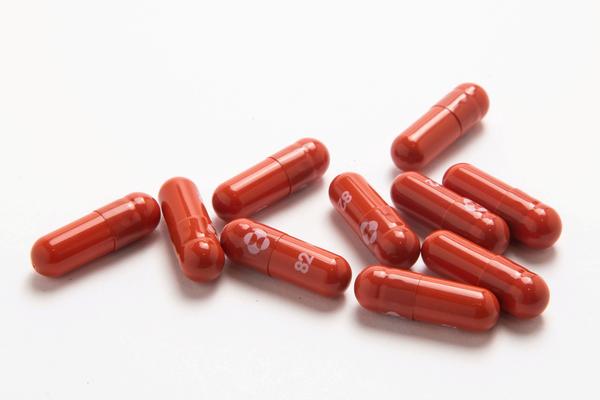 New antiviral drugs are coming for COVID. Here's what you need to know

Molnupiravir, an antiviral drug to treat mild to moderate COVID-19, is under consideration by the FDA for possible authorization.Merckhide caption

Molnupiravir, an antiviral drug to treat mild to moderate COVID-19, is under consideration by the FDA for possible authorization.

A Food and Drug Administration advisory committee voted Tuesday in favor of recommending molnupiravir, a new antiviral pill made by the drug companies Merck and Ridgeback Biotherapeutics, for treating COVID-19.

If the agency authorizes use of the drug, it would be the first oral antiviral treatment for COVID-19 for use at home.

Take-at-home pills could be a game changer for keeping COVID-19 in check and helping people recover from early stages of the disease.

"With omicron [variant] breathing down our necks, we need drugs, we need really effective antivirals, and we need more of them," says Carl Dieffenbach, director of the Division of AIDS at the National Institute of Allergy and Infectious Diseases, who is leading antiviral development.

If the FDA agrees with the panel's recommendation and authorizes it, molnupiravir would be the first oral home treatment available for mild to moderate COVID-19. A second antiviral pill, Paxlovid — from the drug company Pfizer — is being vetted by the FDA and authorization could soon follow.

Currently, the only FDA-authorized treatments for non-hospitalized COVID-19 patients are monoclonal antibodies, which typically require intravenous infusion in a clinical setting. By contrast, pills are cheaper to make and easier to distribute and take.

"This [could be] huge for the world in terms of what we can do to slow down, and hopefully stop, the transmission of this virus," says Dr. Phyllis Tien, an infectious disease specialist at the University of California, San Francisco and a member of the COVID-19 Treatment Guidelines panel for the National Institutes of Health.

Tien and other specialists note that the drugs are not designed to replace vaccination but to provide additional support for people who get sick, especially the elderly or immunocompromised who don't have strong response from the vaccines.

"You can't take the pill until you get sick," says Dieffenbach. "So you still want to avoid getting the disease. I think that's rule No. 1."

According to Merck's data analysis, molnupiravir reduces the risks of hospitalization and death in COVID-19 patients by 30% when the pills are started within five days of symptom onset.

Health experts find these results lackluster. "It'd be great if molnupiravir had held up [to a higher efficacy rate] because it could be, in some ways, an ace in the hole here. But it's not," says Dieffenbach.

The results are still significant for this pill in terms of reducing hospitalizations and deaths. But the pill appears considerably less effective than treatment with monoclonal antibodies, which reduce the risk of severe COVID-19 by 70% to 85%.

Given the higher efficacy of the antibody treatments, "I think we will continue to use those, particularly for high risk people," says Dr. Rajesh Gandhi, an infectious diseases physician at Massachusetts General Hospital and Harvard Medical School who serves on COVID-19 Treatment Guidelines Panels for the NIH and the Infectious Diseases Society of America.

Paxlovid, the Pfizer drug, may be much more effective — the company announced preliminary results showing that the drug reduces the risks of hospitalizations and deaths by 89%, though these numbers may change after the full study results are analyzed.

Both molnupiravir and Paxlovid are a series of pills that are taken twice daily for five days. Paxlovid is taken with an additional booster pill of ritonavir, a drug that helps keep the drug active in the body for longer. 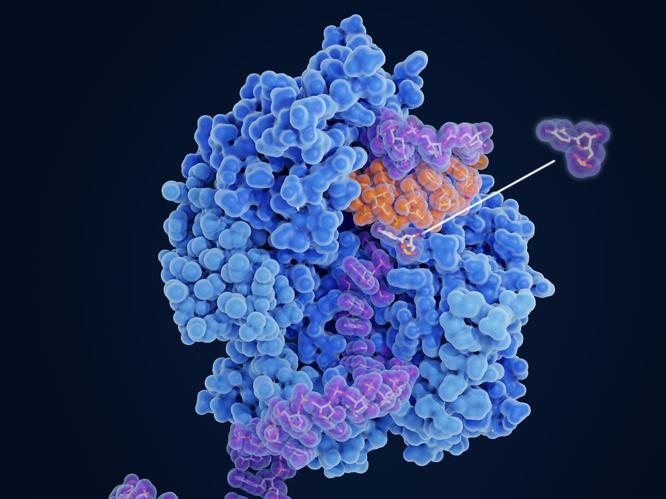 When the coronavirus enters a human cell, it makes many copies of itself — more viruses that can then spread around the body and out of the body to infect others. Both pills stop the virus from multiplying — by targeting parts of the replication process.

"In order for the virus to make itself, it needs to first make a very long string of proteins, which are the building blocks that will build the next virus," Dieffenbach explains.

Molnupiravir changes the order of the amino acids that make up the proteins, so the proteins are defective — and the new virus that's built is broken, unable to infect new cells or replicate itself.

Paxlovid, the Pfizer drug, interferes in the next step of replication — when the virus uses a protease, a specific kind of enzyme, to chop the protein string in exactly the right places to create its building blocks. The drug blocks the enzyme and keeps the virus stuck on this step. "It gums up the works and kills the cell and makes for a great immune response," says Dieffenbach.

Both drugs are intended to give your body a leg up in fighting off a COVID-19 infection. "If your viral load comes down quickly, then your body doesn't have to do as much work to try and get rid of this virus," Tien says.

Molnupiravir impairs SARS-CoV-2 replication. The drug works by changing the order of the amino acids in the proteins it's making to build new viruses, so the proteins are defective — and the new viruses are unable to infect new cells or replicate.Juan Gaertner/Science Sourcehide caption

Molnupiravir impairs SARS-CoV-2 replication. The drug works by changing the order of the amino acids in the proteins it's making to build new viruses, so the proteins are defective — and the new viruses are unable to infect new cells or replicate.

Some experts have raised concerns that molnupiravir could interfere with fetal development during pregnancy, or hasten the development of new viral variants. For now, these drug safety concerns are largely hypothetical, but they are important to weighing the risks of the drug versus its benefits, panel members said at the FDA advisory committee meeting.

Because the Pfizer drug works through a different mechanism, the concerns with molnupiravir do not directly apply to Paxlovid, though the company has not made its safety data public yet. Ritonavir, the booster for Paxlovid, is a drug that has been used in HIV treatment, and is known to cause nausea, vomiting and a bitter, metallic taste.

Both pills are demonstrated to work best when given early in the course of infection in patients at high risk for disease progression, says Tien. In clinical trials, both molnupiravir and Paxlovid were given to patients within five days of symptom onset.

That's because COVID-19 can be broken roughly into two phases — the viral phase and the immune dysregulation phase. "The goal of the drugs is to assist in the process of really whacking the virus hard so the immunity can finish it off," Dieffenbach says.

In the later stages of disease, the health problem often shifts to hyper-inflammation — where a person's own immune response is causing many of the symptoms of severe disease. Then, dampening the immune response with drugs like steroids is more helpful to recovery.

Stopping the viral phase would be great, but there's a hitch: Because the pills work best when given within days of infection, testing and treatment go "hand in glove," Gandhi says.

"When someone develops a symptom, they [should be] able to get a test and result rapidly, and if they're at high risk for progression, start on a pill," he says. If instead, a person waits a few days to get tested and another few days for results, the period when these pills are most effective has likely passed.

Probably. It's likely that the antiviral pills will remain effective against coronavirus variants, even if protection from current vaccines and antibody treatments wanes — though studies are needed to confirm this, says Dieffenbach.

That's because the antiviral pills take aim at a different part of the virus life cycle.

Vaccines and monoclonal antibody treatments target the virus through its spike protein, which it uses to attach and gain entry into cells. This part of the virus is under "intense selective pressure," Dieffenbach says — new variants of concern, including delta and omicron, often have changes to the spike protein, which may help the virus spread more easily.

The antiviral pills, on the other hand, are directed at the "viral copying machinery," or the enzymes that help the virus replicate once it's inside a cell, says Gandhi: "So there's reason to be optimistic that these drugs will continue to be efficacious against variants including omicron," even if immunity from vaccination declines.

In an email to NPR on Monday, a Merck spokesperson concurred, writing that "we believe molnupirvir will likely be active against [the omicron variant]" and noting that the drug "demonstrated consistent efficacy" across viral variants gamma, delta and mu.

However, both Dieffenbach and Gandhi say specific studies pitting the pills against specific variants are needed to confirm this hunch.

These antiviral pills, if authorized by the FDA, could be useful tools — but there's room for better antivirals to be developed, says Dieffenbach. And that's to be expected: "It wasn't until we had HIV drugs for six or seven or eight years that we really got to a cocktail of three drugs that were easier to take and didn't have pretty profound side effects," he says.

Gandhi would like to see pills that are proved to be safe and effective in specific, vulnerable populations. "I'm hoping for a drug that we can safely give to pregnant women, because they're at high risk for severe COVID," he says. He'd also like to see trials for immunocompromised people who may have a longer window of opportunity for antiviral treatments, because they tend to take longer to clear the virus from their systems.

There may be a future need to develop COVID-19 treatments that skirt drug resistance, says Tien, if the coronavirus evolves to make specific targets ineffective. Again taking a lesson from HIV treatment, she says, using combinations of therapies could be one strategy against variants.

Even as treatments get better, they should not be seen as replacement for vaccines, says Gandhi. "What omicron tells me most forcefully is that, until we drive down rates of COVID around the world, these variants are going to continue," he says. As for treatments: "They are a backup plan. They're an adjunct. They're not the prime way we should be getting out of this pandemic."