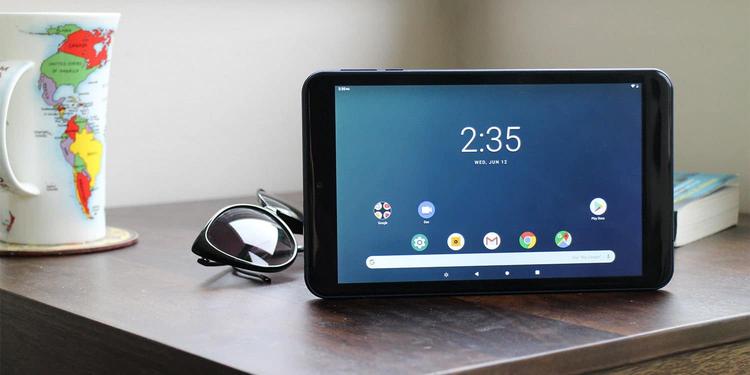 REVIEW– The Onn tablet is an affordable gadget with lots of free apps and a micro SD card slot for extra storage.

An 8-inch tablet with 16GB and a 2-megapixel camera.

What’s in the box?

My first impression of the Onn Tablet was that it reminded me a lot of our Kindle Fire and iPad Mini 4, in both the size and feel.

While the price is also quite comparable to a Kindle Fire, my son claims the games available on the Onn tablet are of much higher quality, and that makes sense since the Kindle is marketed primarily as a reading device. (Not to slam the Kindle Fire, he uses that often for reading downloaded library books.)

Meanwhile, the iPad mini costs more than three times as much as this tablet, but it comes with a lot more storage, higher picture quality, more bells and whistles, and the Apple name attached.

Besides its price, one thing that really sets the Onn tablet apart is its unique navy blue/dark greyish color, which really makes it pop next to the iPad mini and Kindle.

Setup was simple and clear. Step-by-step instructions came on a decal you could easily peel off the screen.

You could connect it to your Gmail account and create a password if you wanted. It took about 5-10 minutes. And then we just waited until it fully charged, which took about 30 minutes. 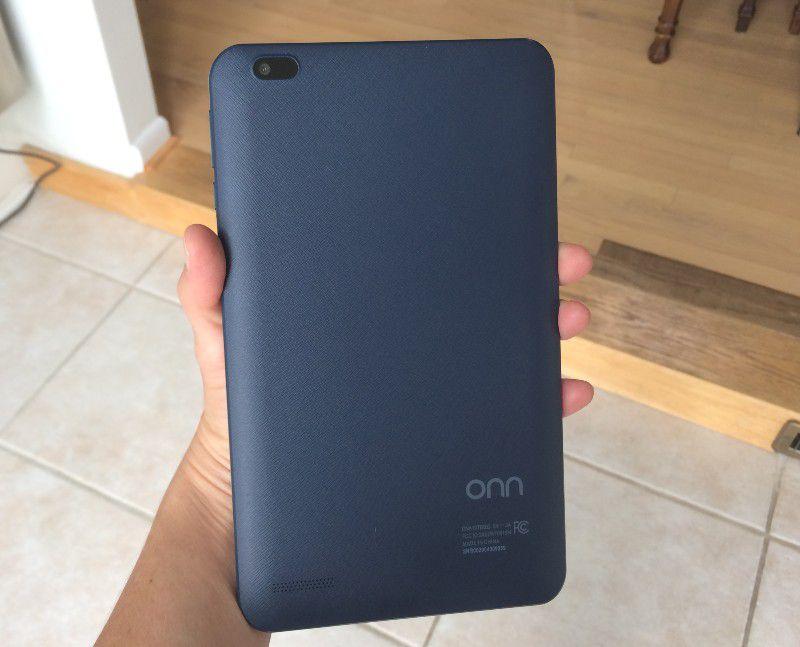 The navigation and operation were intuitive and similar to other tablets we’ve used.

On the upper right-hand side of the tablet, you find the volume (+ and -) toggle, with the power button next to it. (Also note, by holding the power and volume-down button at the same time, you can take screenshots.)

The charging port is centered at the bottom.

On the back, you find the speaker (lower left) and the rear-facing camera (upper left), making it nearly identical to the setup of the Kindle Fire, as you can see above in the side-by-side photos.

And the 3.5mm headphone jack is along the very top edge, with the slot for a micro-SD card next to it.

The tablet only has 16GB of storage. After just a few weeks, we’ve already used 47 percent of the space it came with, without a single saved photo or video. However, in the long term, we plan to use it with a 32GB micro SD card, which we found on Amazon for $5.

When the screen is on, it has four navigation links running along the bottom with quick access to Walmart, a back button, the home screen, and recently used items. When you’re on the home screen, there’s a fourth navigation button at the bottom, three stacked dots, which take you to the settings.

On the Settings page you can adjust:

Within the System Settings, there’s a search bar at the top to search all settings. You can also set a night light schedule and add emergency information.

You can also see:

The Onn Tablet comes pre-loaded with popular apps like Google Chrome, Drive and Maps. And with the Play Store you can download all sorts of goodies. My 11-year-old son was impressed with the selection of free games.

When you download apps, they’re automatically put into categories: Games, Tools, News & Books, Lifestyle and System. However, you can manually move them if you choose.

If you swipe up, it will show you all of your apps. If you swipe down, it shows you any notifications.

In addition to using it for a whole lot of gameplay, this tablet’s been great for communication (Google Hangouts) so my son can chat with his friends or keep in touch with me, without needing a cell phone. Messages even pop up if he’s playing a game, which isn’t the case on his Chrome book. (Of course, you need wifi, which you wouldn’t with a cell phone and data plan. But for us, it’s a nice compromise to hold off on getting him a phone for a while.)

This tablet is also nice for watching videos. With a screen resolution of 800 x 1280, you get a clear, vibrant picture. In fact, I need to drag my son away from watching YouTube shows on this little device he’s claimed as his own, and I can see it coming in very handy for travel.

The 2-megapixel camera in the front (rear-facing) worked very well, even capturing my wiggly dog.

The selfie camera is only 0.3 megapixels, so it’s not high quality. But for goofing around or (somewhat grainy) video chats, it’s passable. Though I’d imagine most people’s cell phones would give a much clearer picture.

Battery life was decent. While the first charge only took about 30 minutes, after a month of use it takes just under two hours to fully charge it. The manual lists it as having 5 hours of battery life, but right now ours give us about 6 hours of continuous use, playing games and watching videos. That should be plenty long for everyday use but might not hold up for overseas flights or long-distance road trips, unless you also bring a portable charger.

We only ran into a couple of hiccups. First, we couldn’t get the headphones to work. My son tried two different pairs but the sound kept coming out the speakers as if the headphones weren’t even plugged in. The third pair worked like a charm. The only difference was that the third pair has a TRS connector and cable (with an additional ring on the connector) and the first two were TS.

My son also had trouble downloading some animated and 3D backgrounds. Not a big deal, but a hiccup.

It’s a solid tablet for a reasonable price. Great for kids and the budget conscious.

Price: $64, current promotion includes $20 off Walmart eBooksWhere to buy: WalmartSource: The sample of this product was provided by Onn/Walmart.