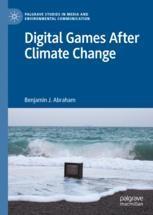 What we've learned about digital gaming's climate impact - a summary

Video games are getting bigger. File sizes are growing; patches are growing (and getting more frequent); cloud gaming is more accessible than ever; and downloading games digitally, as opposed to buying them on physical discs, is now on average very much the norm. Like it or not, the future of video games is delivered in bits and bytes, rather than boxes, and there is one obvious result: a considerable increase in the amount of data this hobby requires us to download.

This is what got us wondering about the effects of gaming downloads in the first place, and is why we published our recent (very) long-read yesterday, asking: What does gaming's all-digital future mean for the climate crisis?

Setting out, what we hoped to discover was the impact of that ever-growing pile of downloads on the climate. It turns out that was easier said than done, but there are some more definitive lessons to be learned - quite a few of them, in fact - and picking through the findings of various studies and corporate responsibility reports, there is some semblance of an answer to be found.

With that in mind, here's a (relatively) brief summary of the key things we've learned.

What actually IS the climate impact of digital downloads, patches, and cloud gaming?

In brief: it's complicated. On the one hand, in the immediate term, playing games digitally - be that via downloads or the cloud - is almost guaranteed to produce fewer CO2 equivalent emissions, and therefore heat the planet less, than doing so via physical disc.

This is because: a) ever-growing data centre efficiency, due to some concerted efforts by companies to improve power consumption, is making a real difference, offsetting the rapid growth of internet traffic over the last decade entirely. And b) it relies on the electricity grid, which in theory can be fully decarbonised in the near future (if governments and companies do the necessary work fast enough). Contrast that to the things we use to move physical items, like lorries, cargo ships, and planes, and you can see the basic reasoning. Generally, making a disc and sending it somewhere physically creates more emissions than sending bits through a piece of copper wire. However...

The details are where things get complicated. Efficiency gains have offset the growth in demand, but they haven't caused data centre energy usage to actually drop in absolute terms - as in, go down year-on-year instead of staying flat - which we need to be doing overall if we want to hit IPCC targets in time. And national grids are decarbonizing, but at different rates, varying from one country to the next - or, in the US, from state to state. Changing that requires governments, corporations, and voters with the desire to do so, and as we learned, some companies have very different standards as to what counts as "carbon neutral" or real "renewably sourced" energy.

Then, there are the externalities, as any good economist will hastily remind you. The industry's switch to digital gaming might mean lower emissions in the immediate term, but it might also lead to a massive boost in demand for the services themselves - it's easy to imagine a combination of ubiquitous 5G and cheap cloud gaming combining to do just that, for example. Growth in demand might outstrip the growth in efficiency; it might mean a growth in always-on network infrastructure in order to account for higher peaks; it might mean more demand for hardware, like PC components or screens, that require those smelted metals.

And yet, even then, it might still be better than the alternative. One of Professor Jonathan Koomey's maxims is to always ask "compared to what?" when thinking about technology's energy usage. In that case, as Joshua Aslan concludes in his paper, taking a broad group of averages, gaming produces fewer emissions than driving to the cinema to watch a film, or football pitch for a quick match with friends. But it still uses energy, it could still have major knock-on effects, and that energy still can - and must - be reduced.

If we learned one thing about energy, emissions, and technology as a whole, it's that it's extremely difficult to know where to draw the boundaries of this kind of question. So, like we said: it's complicated. 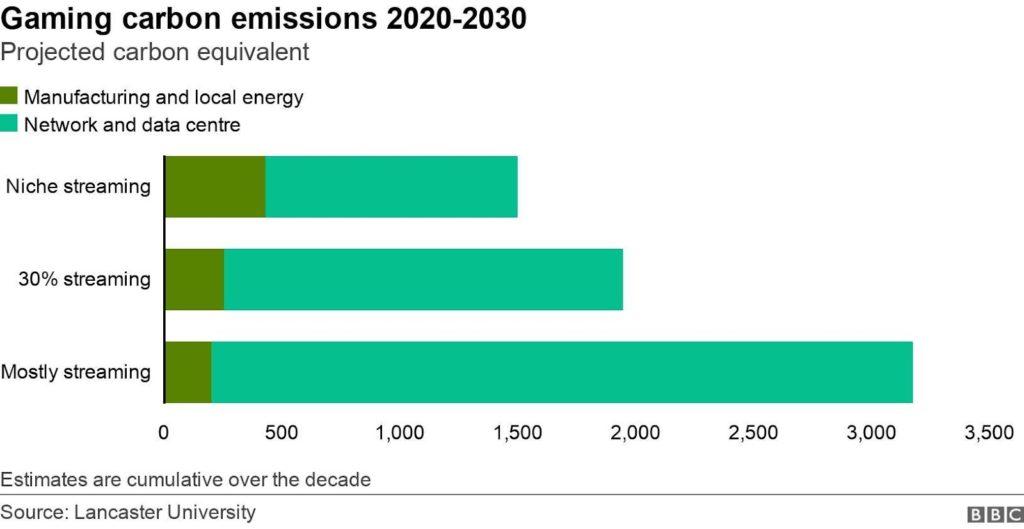 Should I buy games on disc, download games, or stream them?

Aslan's summary (which you can read in more detail on page 2 of our main article) is: it depends. There are three key variables at work. How big is the game in terms of gigabytes, how long do you want to play it for, and what device are you going to be playing it on?

Generally, discs are out - there's only one ultra-specific scenario (which already relies on all kinds of averages by necessity, given the natural scope of the study) - where disc-based gaming is more efficient.

As for digital vs cloud, that's where things really depend. Downloads use a chunk of energy during the download process, then just the console's own energy consumption once you're playing. Cloud uses a smaller amount of energy on top of the console, but it's being used during your entire playtime - and which means emissions can get very high if you do it for a very long time. In brief then: the smaller the game's file size (in total, including all patches you download too), and the longer you're playing it for, the better digital downloads are. The larger the total game file downloads, and the shorter the game, the better cloud is as an option. (But remember, you're using a lot of energy per hour when you cloud game, so if you end up doing it for much longer than planned, you can dramatically increase the emissions produced compared to the alternatives.)

A quick example: a fairly chunky, 35GB demo that you can only play for two hours? Better to cloud stream it. A small service game you'll play for ages, like something along the lines of Rocket League? Better to download it up front. See our main report and J. Aslan's study (free to read here) for much more detail on the variables that can affect this (the device you use is a big one...).

What did we learn about hardware?

It's important, and its impact can vary dramatically. For one, "thin" clients use very little energy locally when cloud gaming. Examples include phones, tablets, smart TV apps, and streaming devices like a PSTV or Stadia dongle, and handheld consoles like the Nvidia Shield or Nintendo Switch.

Others, which lack "system integration" as it's known in the field, can use as much power locally when cloud gaming - where all the processing is being done, with energy powering it, in a data centre elsewhere - as they do when powering the game themselves, which is an almighty waste. Basically the work's being done twice, which means unnecessary emissions. Examples include the usual static home consoles (both last and current gen) and above all, mid- and high-end gaming PCs.

Hardware also makes a difference however you play. Dr Evan Mills - an expert in the field who's also a scientist on the IPCC itself - wrote a couple of studies that highlighted this. On average, for instance, high-end gaming PCs use around twenty times the energy to play The Elder Scrolls 5: Skyrim than a Nintendo Switch does. He also showed that high-end gaming PCs could use up to 75 percent less energy and still get the same levels of performance in games.

What can I do in general?

Firstly: it's not all on you! Companies and governments need to keep raising efficiency levels, meaningfully funding renewable energy, and cleaning up the grid, while the fact that just about every appliance in your house has a standardised energy rating bar your games console should be seen as a point of shame for the industry. But there are still some things you can do in the meantime.

What can the industry do in general?

This, really, is another question altogether, and so we'll defer to Dr. Evan Mills for much of our answer. Let's start with his policy-maker suggestions from the 2018 "main" report he cited to us (page 11).

There is also one other thing to think about, industry-wide, including for us who cover games and play them.

Is there one big takeaway?

In our opinion, it's that it's time for a shift in mindset - collectively. An obvious example is hardware. It's worth remembering that it's in a company's interest to sell you new hardware every year, be that a graphics card upgrade, a bigger monitor, or a marginally improved console. It's another question as to whether those upgrades are actually necessary, and in context of the climate crisis, it's our opinion that often they are not.

This, really, was the consistent point made to us by the specialists that we spoke to. You can be on the greenest grid in the world and still have a significant impact on the climate by constantly refreshing hardware for a few extra frames per second - because the manufacture, shipping, and disposal of hardware produces greenhouse gases.

More broadly, it's about our attitudes as a whole, and the responsibility the whole industry has. As games are run at higher frame rates and higher resolutions, the returns - in terms of how many emissions are created from that increase, versus the difference visible to the human eye, or, above all, the actual amount of enjoyment being created - begin to diminish.

It seems increasingly likely that there will come a time when it feels obscene to still fetishise a console or a graphics card's gains in raw processing power, without at least looking at the emissions that increase might entail. It's a question the whole industry has to ask itself, from marketers and manufacturers to journalists and players. And there's a good case to say the time's already come.