The Apple Mac Studio has arrived, packing the most powerful Apple silicon yet into a compact aluminum chassis that looks like a Mac mini after a growth spurt. This is a big deal because it’s the first new Mac desktop Apple has introduced in over a decade, and the first to debut with an M1 chip inside.

What a chip it is, too: the Studio is the first Mac you can configure with an M1 Ultra, the most powerful M1 chip Apple’s ever made. It’s effectively two M1 Max chips joined together for double the power, and it delivers remarkable performance in the Mac Studio.

The Mac Studio launches March 18, and you can order one right now via Apple’s website for a starting price of $1,999. For that you get a Studio with an entry-level M1 Max chip sporting a 10-core CPU, a 24-core GPU and a 16-core Neural Engine, along with 32GB of unified memory and a 512GB SSD.

If you want a Studio with one of the new M1 Ultra chips, which are effectively two M1 Max chips joined into one mega-chip, it’s going to cost you quite a bit more. The entry-level model is $3,999, and for that you get an M1 Ultra with a 20-core CPU, a 48-core GPU and a 32-core Neural Engine, as well as 64GB of RAM and a 1TB SSD.

The Mac Studio’s brushed aluminum chassis looks like a taller, bulkier Mac mini. It has the same 7.7 x 7.7-inch base, but at 3.7 inches in height it’s over two inches taller than the mini. It’s over twice as heavy, too: a Mac Studio with M1 Max weighs about 5.9 pounds, while the M1 Ultra model is a hefty 7.9 pounds, due in part to the extra weight of the material Apple uses to cool the more powerful chip.

But while it’s a bit more unwieldy than the mini, the Mac Studio is still a remarkably compact desktop PC that’s easy to slide into an existing desk setup with minimal fuss. There are grilles on the back and bottom for cooling, and it tapers down into a circular base underneath that allows for better airflow and makes the Studio appear to hover a few centimeters above the table.

Apple’s logo is emblazoned across the top of the Studio, and in conjunction with the rounded corners it makes the whole PC look a bit like an Apple icon that’s been extruded out of your desk. It’s a slick bit of design work, one that’s easy to use and looks good in just about any office setup.

Apple did a good job of equipping the Mac Studio with enough ports to make it a viable creative powerhouse. On the back of every model you’ll find 4x Thunderbolt 4 ports, 2x USB-A ports, an HDMI port, a 10Gb Ethernet port and a 3.5mm audio jack that supports high-impedance headphones or speakers. There’s also a spot to plug in the power cable, and the afore-mentioned power button on the lower right-hand side (when viewed from the rear).

Between the SD card reader, the USB-A/USB-C ports and the Thunderbolt 4 ports you've got just about everything you need to use the Studio for work and play. 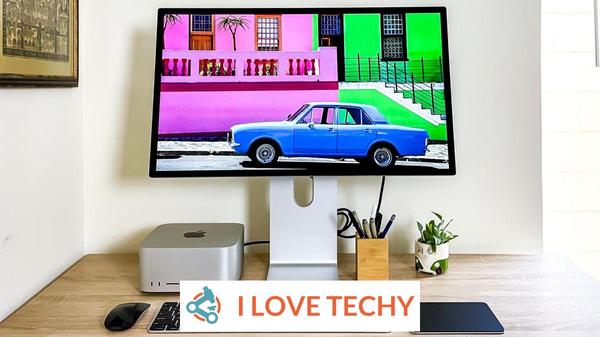 The Mac Studio review unit Apple sent us is one of the most powerful you can buy, packing the beefiest M1 chip yet made, so I expected it to deliver some impressive performance in my hands-on testing. Anecdotally, I wasn’t disappointed: the Studio had no trouble powering through my daily workload, and even when I had 30+ tabs open in Chrome with multiple 4K videos streaming while listening to Apple Music, I didn’t notice a single hiccup.

Even when I then opened projects in Final Cut Pro, Adobe After Effects, Lightroom and Logic Pro I was able to flip between them and futz around in each project simultaneously without any noticeable issues.

In our Handbrake video encoding test, which times how long it takes the computer to transcode a 4K video down into 1080p, the Mac Studio achieved a solid 3:55. That's good, but not as good as bigger Windows PCs like the Alienware Aurora R13 (3:52) or the Origin Millennium 2022 (3:22). This is a bit disappointing given that speedy video production is a key aspect of Apple's marketing pitch for the Studio, but finishing the test in under 4 minutes is nothing to sneeze at.

It may seem silly to compare last year's MacBook Pro against this year's Mac Studio, but our 16-inch Pro came with the best M1 Max money can buy (10-core CPU, 32-core GPU), and our Mac Studio arrived with the best M1 Ultra you can get (20-core CPU, 64-core GPU). That means we can compare the two to get a sense of how much more powerful the M1 Ultra is over the M1 Max.

The answer appears to be quite a bit: When I ran the Studio through 3DMark's Wild Life Extreme graphical benchmark in Unlimited mode, it was able to achieve an average score of 35,111 and an average framerate of 210.3 frames per second. That's nearly twice as good as the M1 Max-powered Pro, which earned a score of 20,220 and maintained an average framefrate of 121 fps in the same test.

When I tasked our Studio with running the Geekbench 5.4 CPU synthetic benchmark gauntlet, which we run on all computers we review, it performed remarkably well. The maxed-out M1 Ultra inside helped the Studio earn a score of 23,931 in the Geekbench multi-core CPU benchmark, which is better than many of the best gaming PCs on the market.

Put simply, a tricked-out Mac Studio with a top-of-the-line M1 Ultra chip is good at many things, but it appears to run circles around even the biggest, most powerful gaming PCs when it comes to multithreaded workflows. I never noticed much more than a hint of fan noise either, even after running tests and gaming on the Mac Studio for hours.

Unfortunately, many of the best PC games aren’t optimized for Apple silicon and won’t run well (or at all) on the Studio. However, on the flip side you gain access to a smorgasbord of games on Apple’s App Store, both within the Mac App Store and the iOS/iPadOS App Stores since Apple’s M1 chip can run iOS and iPadOS apps.

Personally, I downloaded Steam for Mac and had fun playing games like Crusader Kings III, Pathfinder: Wrath of the Righteous and Total War: Warhammer II. The Mac Studio with M1 Ultra had no trouble running them with all the graphical settings cranked up, averaging between 30-70 fps depending on the game.

That’s not exactly buttery-smooth high-framerate action, but it’s good enough to make the Studio a halfway decent gaming machine. I also benchmarked the gaming performance of our Studio review unit in both Rise of the Tomb Raider and Sid Meier's Civilization VI: Gathering Storm. These games are a few years old at this point but run well on a broad variety of PCs, making them great for comparing performance between machines.

In the Sid Meier's Civilization VI: Gathering Storm benchmark our Mac Studio with M1 Ultra achieved an average framerate of 38.85 frames per second. Note that this was while running it full-screen at 1440p resolution, which was the highest the game would go.

When I ran the Studio through the Rise of the Tomb Raider graphical benchmark at native 5K resolution with all settings cranked up to max, it delivered an average of 22.29 frames per second. That's not great for a game that's seven years old at this point, though when I knocked the settings back down to Medium the Studio was able to run the game at a slightly better 31.65 fps.

Unfortunately most of the games we use to benchmark gaming PCs (like Red Dead Redemption 2) won't run natively on macOS, and we only use Sid Meier's Civ 6 and Rise of the Tomb Raider to benchmark non-gaming PCs since, again, they're less demanding and easier to install on a variety of computers.

So what that means, in short, is that I can't tell you how the Mac Studio's gaming performance stacks up against the beefiest gaming PCs because we didn't run the same games on both. The 16-inch MacBook Pro 2021 (M1 Max w/ 10-core CPU, 32-core GPU, 64GB RAM) we tested last year was able to deliver an average of 47.32 fps in the Civ 6 benchmark, albeit at a strange resolution (1728 x 1117) that's lower than the 1440p the Mac Studio delivered.

We also recently tested a Lenovo ThinkPad P1 Gen 4 (Intel Core i7-11850H, RTX 3070 laptop GPU, 64GB RAM) mobile workstation running Windows 10, and since it's not technically a gaming laptop we ran it through the Civ 6 benchmark. However, since it packs beefy components more commonly found in gaming laptops, we can get a sense of how the Mac Studio's performance compares to a modern Windows gaming machine.

So while the Mac Studio is more than adequate if you want to play games, it's not ideal for playing the latest and greatest at the highest settings or fastest framerates.

The Mac Studio can deliver more power than any Apple computer on the market save the Mac Pro, and it packs it all into a quiet, well-designed chassis that looks good on a desk. I enjoy using it for work and play, and if I was in the market for a Mac desktop myself, this is the one I would want. As much as I love seeing Apple silicon put to good use in MacBooks, where its power efficiency helps deliver some of the best battery life in the business, the Mac Studio with M1 Ultra proves that Apple’s chips have the chops to compete with the best desktop PC silicon from Intel and AMD.

Of course, since this is Apple we’re talking about you’ll pay for the privilege. The Mac Studio’s $1,999 starting price isn’t too bad, but remember that just gets you an entry-level model – you don’t get the M1 Ultra and 128GB of RAM in our review unit for that price. The powerhouse Apple sent us costs just over $6k, and you can buy an awful lot of PC (plus a nice monitor too) for that kind of money.

Admittedly, most gaming PCs and workstations don’t look nearly as elegant or run nearly as quiet as the Mac Studio does. They also can’t match M1-specific optimizations like the ProRes video accelerators and 32-core Neural Engine, which helps tackle AI and machine learning tasks (like offline dictation in macOS Monterey). If those features don’t matter to you, you’re probably better off saving some money and buying (or building) a Windows desktop PC to meet your needs.

But if you want the best Mac desktop with the most powerful piece of Apple silicon yet, you want a Mac Studio with M1 Ultra.