The recently-launched Mac Studio is the most powerful Apple Silicon Mac we’ve seen so far, and Apple made sure we know that. Thanks to the Apple M1 Ultra processor, the Mac Studio packs a lot of power in a tiny package, and it still manages to fit a lot of ports in that chassis, too. On the surface, it looks like the ideal powerhouse. But how exactly does the Mac Studio compare to Apple’s biggest powerhouse yet, the Mac Pro?

Apple made some direct comparisons, so we have a pretty good idea of what to expect in terms of performance. But there’s a bit more to it than just those performance numbers, so let’s take a look at two of the best Macs out there.

Ever since Apple introduced Apple Silicon, Macs have been getting incredibly powerful, and with the Mac Studio, despite its small size, Apple seems to have created a contender for its biggest powerhouse. At this time, all we really have are Apple’s official comparisons, but they already show exactly what it’s capable of. First, let’s take a look at what Apple says about the Mac Studio with the M1 Max processor.

First off, Apple says this model offers up to 50% faster CPU performance than the Mac Pro with a 16-core Intel Xeon processor. As for the GPU, it’s over three times faster than the Mac Pro’s most popular GPU, which is the Radeon Pro W5700X. And when it comes to transcoding video, it’s 3.7 times faster than the Mac Pro with that same GPU and an Afterburner card. That’s already incredibly impressive for the Mac Studio. With the Apple M1 Max and 64GB of memory, the Mac Studio costs $2,599, but the Mac Pro configuration Apple used for the comparison costs $13,399 (including 192GB of RAM). Those prices exclude any storage upgrades for either model.

One thing the Mac Pro has in its favor is upgradeability and some repairability. You can always add more RAM or storage to the Mac Pro, and you can go up to a massive 1.5TB of RAM, which is a far cry from the 128GB maximum of the Mac Studio. You can also replace the GPU or add other types of expansion with an MPX module. The Mac Pro is designed to have easily accessible internals. Plus you can connect an external GPU via Thunderbolt, as long as it’s an AMD GPU.

The Mac Studio has no upgrade options once you buy it. Whatever you choose out of the box is what you’ll have forever. The thing is, with the 2019 Mac Pro, even if it is upgradeable, you know there are some things you won’t be able to change. Apple is turning to Apple Silicon across its devices, so you won’t have a ton of options for upgrading an Intel-based Mac Pro over time, whether that’s the CPU or GPU. The options you have now are likely going to be the same two or three years from now, so you wouldn’t be able to upgrade those easily. 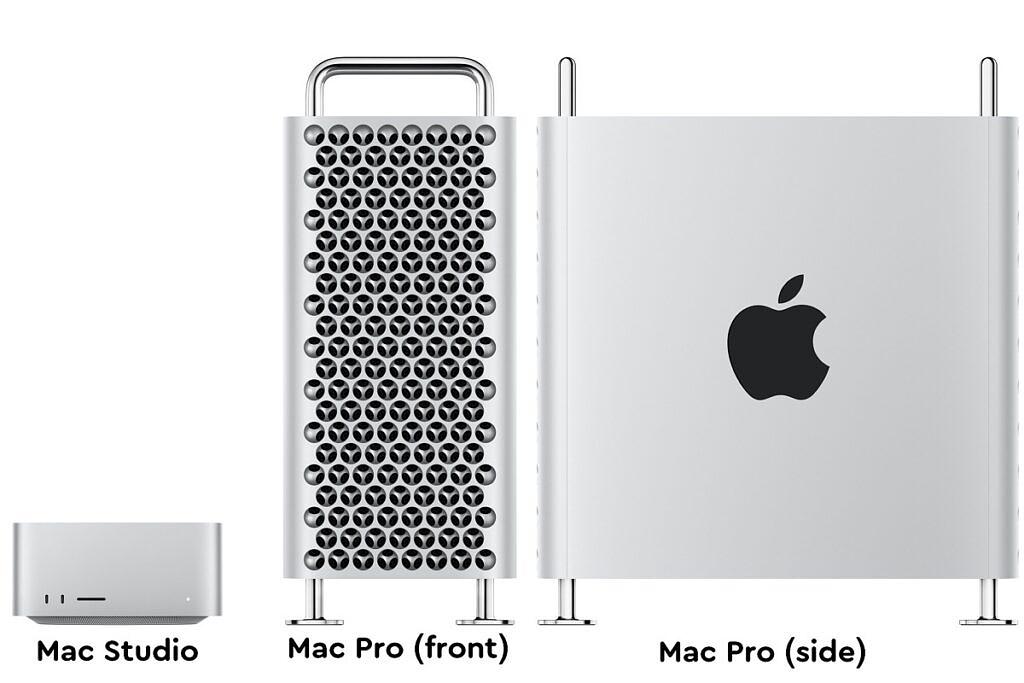 The Mac Studio rivals the Mac Pro in terms of performance, but if you think that means they’re anywhere near the same size, you’d be hugely mistaken. The Mac Studio comes in a compact chassis that’s 7.7 inches square and 3.7 inches tall. It has the same area as a Mac Mini, though it’s roughly 2.6 times taller. Comparing that to the Mac Pro, the difference is huge. The Mac Pro is 8.58 inches wide, 17.7 inches deep, and 20.8 inches tall.

Here’s an approximation of what the Mac Studio would look like next to the Mac Pro:

The Mac Studio is a computer you can easily have on your desk next to your monitor, or even under it, so all the ports are easily accessible. With the Mac Pro, you either need a lot of space on your desk or you’ll keep it on the floor, making the ports a bit harder to get to. There’s also a rack version of the Mac Pro if you want to mount it on a server rack.

Of course, that large Mac Pro size has a lot to do with upgradeability, too. The large chassis makes room for MPX modules, SODIMM slots for RAM, SSD storage slots, and so on. Traditional PC components are large and generate more heat, so they need more cooling, too.

As for what upgrades are available for the Mac Pro, there are a few options to choose from. MPX modules include various GPUs, from the Radeon Pro Vega II to the Radeon Pro W6900X, but you can also buy the Pegasus R4i 32TB RAID module, which adds a ton of storage to the Mac Pro. Of course, you can also buy RAM sticks and M.2 SSDs to upgrade your RAM and storage. The Mac Pro has a tool-less opening system so you can easily get inside it for upgrades.

Comparatively, the Mac Studio has the CPU, GPU, and RAM all built into the Apple M1 Ultra chipset, and the storage is also soldered into the motherboard. This all helps it be as small as it is, but it also means there’s no way to upgrade anything.

Even though the Mac Studio comes in a much smaller package, ports aren’t really being sacrificed with this design. In fact, excluding MPX modules, the Mac Studio has more ports than the Mac Pro. With the Mac Studio, you get four Thunderbolt 4 ports on the back, along with two USB Type-A ports, HDMI, 10Gbps Ethernet, and a 3.5mm headphone jack with support for high-impedance headphones. On the front, there are two extra USB Type-C ports, which support Thunderbolt 4 if you choose the M1 Ultra processor, plus an SD card reader. That allows you to connect up to five displays, including four Pro Display XDRs and a 4K monitor via HDMI.

You can technically get more ports on the Mac Pro depending on the GPU you get, but the Mac Studio has a very solid setup at a much lower price. It also has an SD card reader and headphone jack, which the Mac Pro doesn’t have. Outside of ports included in some GPUs, the biggest benefit of the Mac Pro is having two 10Gbps Ethernet ports. The Mac Studio probably has the more appealing setup to most users, though the Mac Pro can go a bit further if you’re willing to shell out that kind of money.

Rear ports on the MacBook Pro with two GPUs installed

As for wireless connectivity, the Mac Studio is slightly more advanced, too. It comes with Wi-Fi 6 support compared to Wi-Fi 5 on the Mac Pro. Both models support Bluetooth 5.0, though.

The Mac Studio and Mac Pro aren’t necessarily meant for the exact same audience, but if your goal is performance, the Mac Studio seems to pull far ahead. The Apple M1 Ultra handily beats the top-tier Intel Xeon processor on the Mac Pro, as well as its GPU. All that power is contained in a much smaller chassis, too, and it still has a ton of ports, so you’re not really making a ton of compromises.

Where the Mac Pro does have an edge is upgradeability and reparability, thanks to swappable MPX modules and upgradeable RAM and storage. Some MPX modules can even add more storage, so you can truly have space for anything. Plus, the Mac Pro can be configured with up to a massive 1.5TB of RAM, so if you have a use case that requires a huge amount of memory, it’s going be better for that, too.

We’d still say the Mac Studio is the ideal choice for the majority of consumers. If you’re a creative professional with heavy workloads, whether that’s 3D rendering or music composition, the Mac Studio is going to be the best choice for you, especially if you use apps optimized for Apple Silicon.

And if you think you need the benefits of the Mac Pro, it may be worth it to wait for Apple to upgrade it, too. The company has teased an Apple Silicon variant of the Mac Pro, so it may be worth sticking around to see what it brings to the table. Considering it costs at least $5,999, we’d say it’s best to wait and see if it’s the right investment. Regardless, you can buy either the Mac Pro or the Mac Studio below. If you’re not familiar with Macs, check out everything you need to know about macOS Monterey, the latest version of the OS that powers them.