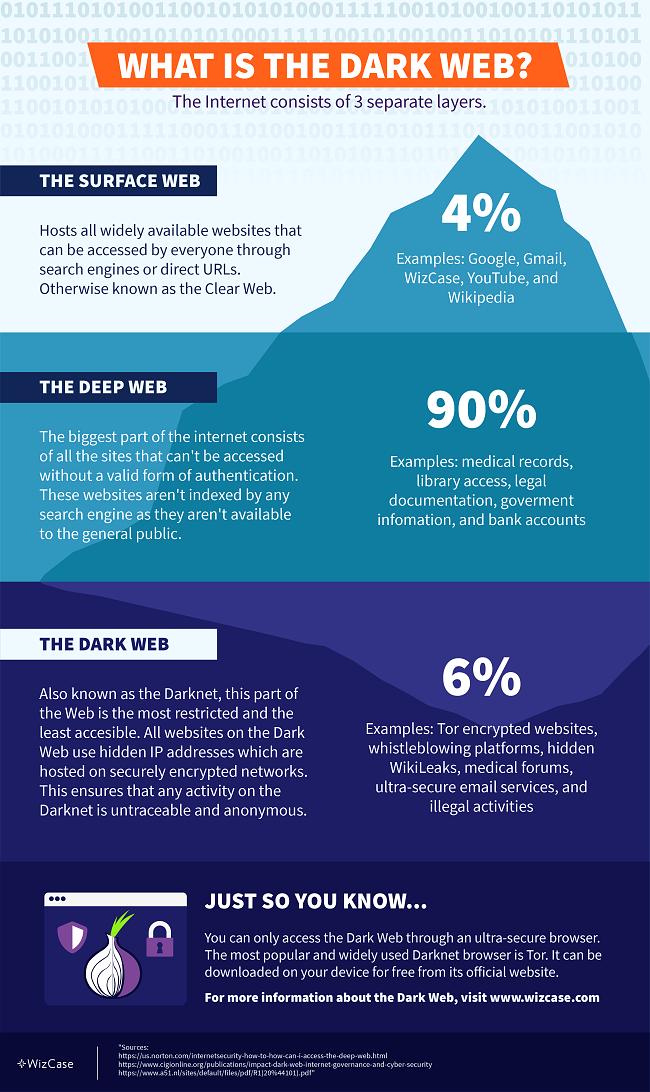 10 things you should know about dark web websites

Back in the 1970s, "darknet" wasn't an ominous term: it simply referred to networks that were isolated from the mainstream of ARPANET for security purposes. But as ARPANET became the internet and then swallowed up nearly all the other computer networks out there, the word came to identify areas that were connected to the internet but not quite of it, difficult to find if you didn't have a map.

The so-called dark web, a catch-all phrase covering the parts of the internet not indexed by search engines, is the stuff of grim legend. But like most legends, the reality is a bit more pedestrian. That's not to say that scary stuff isn't available on dark web websites, but some of the whispered horror stories you might've heard don't make up the bulk of the transactions there.

We spoke to some security pros who offered to give us a bit of a guided tour of the web's nether regions. Hopefully it will demystify things a bit.

Here are ten things you might not know about the dark web.

A 2015 white paper from threat intelligence firm Recorded Future examines the linkages between the Web you know and the darknet. The paths usually begin on sites like Pastebin, originally intended as an easy place to upload long code samples or other text but now often where links to the anonymous Tor network are stashed for a few days or hours for interested parties.

While searching for dark web sites isn't as easy as using Google—the point is to be somewhat secretive, after all—there are ways to find out what's there.The screenshot below was provided by Radware security researcher Daniel Smith, and he says it's the product of "automatic scripts that go out there and find new URLs, new onions, every day, and then list them. It's kind of like Geocities, but 2018"—a vibe that's helped along by pages with names like "My Deepweb Site," which you can see on the screenshot.

...and many are perfectly innocent

Matt Wilson, chief information security advisor at BTB Security, says that "there is a tame/lame side to the dark web that would probably surprise most people. You can exchange some cooking recipes—with video!—send email, or read a book. People use the dark web for these benign things for a variety of reasons: a sense of community, avoiding surveillance or tracking of internet habits, or just to do something in a different way." 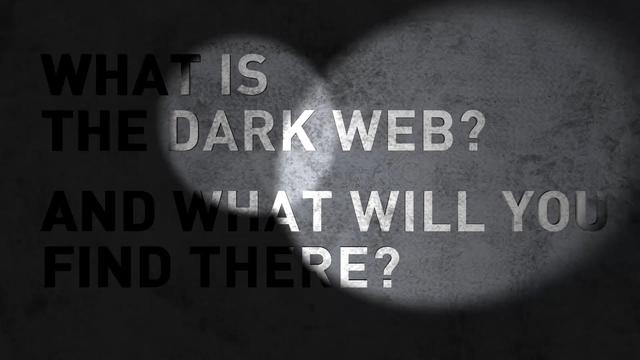 It's worth remembering that what flourishes on darknet is material that's been banned elsewhere online. For example, in 2015, in the wake of the Chinese government cracking down on VPN connections through the so-called "great firewall," Chinese-language discussions started popping up on the darknet — mostly full of people who just wanted to talk to each other in peace.

Radware's Smith points out that there are a variety of news outlets on the dark web, ranging from the news website from the hacking group Anonymous to the New York Times, shown in the screenshot here, all catering to people in countries that censor the open internet.

Some spaces are by invitation only

Of course, not everything is so innocent, or you wouldn't be bothering to read this article. Still, "you can't just fire up your Tor browser and request 10,000 credit card records, or passwords to your neighbor’s webcam," says Mukul Kumar, CISO and VP of Cyber Practice at Cavirin. "Most of the verified 'sensitive' data is only available to those that have been vetted or invited to certain groups."

There is bad stuff, and crackdowns means it's harder to trust

As recently as last year, many dark web marketplaces for drugs and hacking services featured corporate-level customer service and customer reviews, making navigating simpler and safer for newbies. But now that law enforcement has begun to crack down on such sites, the experience is more chaotic and more dangerous.

"The whole idea of this darknet marketplace, where you have a peer review, where people are able to review drugs that they're buying from vendors and get up on a forum and say, 'Yes, this is real' or 'No, this actually hurt me'—that's been curtailed now that dark marketplaces have been taken offline," says Radware's Smith. "You're seeing third-party vendors open up their own shops, which are almost impossible to vet yourself personally. There's not going to be any reviews, there's not a lot of escrow services. And hence, by these takedowns, they've actually opened up a market for more scams to pop up."

Reviews can be wrong, products sold under false pretenses—and stakes are high

There are still sites where drugs are reviewed, says Radware's Smith, but keep in mind that they have to be taken with a huge grain of salt. A reviewer might get a high from something they bought online, but not understand what the drug was that provided it.

One reason these kinds of mistakes are made? Many dark web drug manufacturers will also purchase pill presses and dyes, which retail for only a few hundred dollars and can create dangerous lookalike drugs. "One of the more recent scares that I could cite would be Red Devil Xanax," he said. "These were sold as some super Xanax bars, when in reality, they were nothing but horrible drugs designed to hurt you."

Smith says that some traditional drug cartels make use of the dark web networks for distribution—"it takes away the middleman and allows the cartels to send from their own warehouses and distribute it if they want to"—but small-time operators can also provide the personal touch at the local level after buying drug chemicals wholesale from China or elsewhere from sites like the one in the screenshot here. "You know how there are lots of local IPA microbreweries?" he says. "We also have a lot of local micro-laboratories. In every city, there's probably at least one kid that's gotten smart and knows how to order drugs on the darknet, and make a small amount of drugs to sell to his local network."

...who make extensive use of the gig economy

Smith describes how the darknet intersects with the unregulated and distributed world of the gig economy to help distribute contraband. "Say I want to have something purchased from the darknet shipped to me," he says. "I'm not going expose my real address, right? I would have something like that shipped to an AirBnB—an address that can be thrown away, a burner. The box shows up the day they rent it, then they put the product in an Uber and send it to another location. It becomes very difficult for law enforcement to track, especially if you're going across multiple counties."

Not everything is for sale on the dark web

We've spent a lot of time talking about drugs here for a reason. Smith calls narcotics "the physical cornerstone" of the dark web; "cybercrime—selling exploits and vulnerabilities, web application attacks—that's the digital cornerstone. Basically, I'd say a majority of the darknet is actually just drugs and kids talking about little crimes on forums."

Some of the scarier sounding stuff you hear about being for sale often turns out to be largely rumors. Take firearms, for instance: as Smith puts it, "it would be easier for a criminal to purchase a gun in real life versus the internet. Going to the darknet is adding an extra step that isn't necessary in the process. When you're dealing with real criminals, they're going to know someone that's selling a gun."

Specific niches are in

Still, there are some very specific darknet niche markets out there, even if they don't have the same footprint that narcotics does. One that Smith drew my attention to was the world of skimmers, devices that fit into the slots of legitimate credit and ATM card readers and grab your bank account data.

And, providing another example of how the darknet marries physical objects for sale with data for sale, the same sites also provide data manual sheets for various popular ATM models. Among the gems available in these sheets are the default passwords for many popular internet-connected models; we won't spill the beans here, but for many it's the same digit repeated five times.

It's still mimicking the corporate world

Despite the crackdown on larger marketplaces, many dark web sites are still doing their best to simulate the look and feel of more corporate sites.

One odd feature of corporate software that has migrated to the dark web: the omnipresent software EULA. "A lot of times there's malware I'm looking at that offers terms of services that try to prevent researchers from buying it," he says. "And often I have to ask myself, 'Is this person really going to come out of the dark and trying to sue someone for doing this?'"

And, to prove that any online service can, eventually, be used to bootstrap itself, we have this final screenshot from our tour: a dark web site that will sell you everything you need to start your own dark web site.

Think of everything you can do there—until the next crackdown comes along.

Josh Fruhlinger is a writer and editor who lives in Los Angeles.

22 cybersecurity myths organizations need to stop believing in 2022What is the dark web? How to access it and what you'll findCurrently reading 10 things you should know about dark web websites Booming dark web gig economy is a rising threat The state of the dark web: Insights from the underground Is your data being sold on the dark web?Dark web takedowns make good headlines, do little for... Scan the dark web for threat intelligenceCSO Online CSO provides news, analysis and research on security and risk managementFollow us