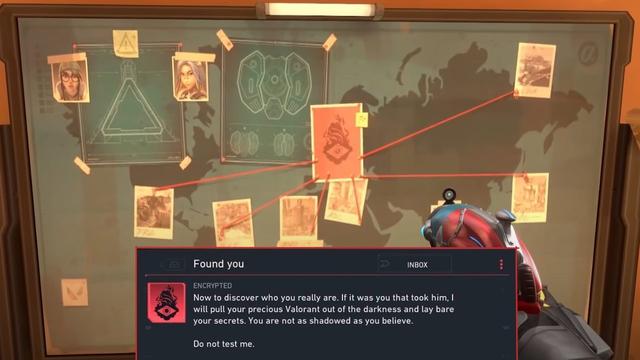 With the newEpisode 4 Act 2that was released, Riot Games really wanted to push boundaries in giving us new info about the new Valorant agent (and lots of lore implications). With tons of details scattered throughout the game and social media, we can piece out 2 theories about who the new Valorant agent is going to be, and what their abilities may be. So without further ado, let's take a look at who thenew agent may be in Valorant!

The first theory we're going to take a look at is what many players firstly started to speculate about: theUndercity skin bundle. While we were traveling around the world with Valorant agents, we got to take a look intoJett'slife. In this music video, one face pops up a bit too many times around city advertisements. This may not be anything special, but what sparked the fire was when the Undercity bundle was released. The main feature of the skins is the face that shows up in Jett's video!

We can see that her name is Victoria Vector. If you take a closer look, this character also has an upcoming music album. Since we got so many teasers around this character in the Valorant world, players started to speculate that she might be the new Agent 20.The new agent's abilities might be oriented around music. We have seen the feature ofmusic in League of Legends, so why not in Valorant too? It just fits perfectly!

Theory No.2: New Agent is an All-Knowing Blackmailer

While we were waiting for the new Patch 4.02 release, small details started to show up around Valorant, more specifically, thePractice Range. A couple of months ago, Riot Games includedBrimstone's officeinto the Practice Range, where we had the chance to read some of his private emails. Here's the kicker though: we got new emails that blackmailed Brimstone to back out of some kind of investigation. We can conclude this because of a board that is in the Practice Range area with some photos on it of an eye that may be familiar.

Does this eye ring any bells? It's anew Player Cardthat was released along with the new Episode 4 Act 2! And trust me, that's the least we have to be worried about concerning the new agent. We got some of theheaviest lore dropsof all time, includingfull names of agentsand metaphorical messages from the blackmailer to the Valorant protocol. This was included intablets scattered across the maps, mostly sitting at the defender side.

The blackmailer seems to know too much. That's why players started to speculate whether they may be the new agent. The new agent's abilities could have something to do with hacking, likeKAY/O, since the capabilities to find out such information isn't that easy. Nothing's for certain though, since this can be some lore drop for the community to be interested in something more special. Who knows, maybeUndercity's girl Victoria and the Blackmailer may be one and the same!

Alongside our normal servers, the PBE Valorant servers also received new lore drops about the new agent. We may even know which location our agent will be coming from. From a voice message thatSovaleft for Brimstone, they are preparing an operation to gosearch for the blackmailer in Turkey!On the board above in the PBE servers, the location of Turkey is also circled, alongside pictures of who is going on this mission to capture the new agent! Who knows, maybe we'll even get anew map in Turkey!

Sova Voicemail | 4.05 PBESova gives Brimstone a list of Agents he believes are the best strike team to apprehend the blackmailer."We will bring this threat to justice, Brimstone, you have my word."| #VALORANT pic.twitter.com/FGJkQKngzI

What's more interesting though is that we got more dossiers for agents and their full names. So it seems as if the Blackmailer has no plans on sparing anyone! Let's hope that the new mission in Turkey will shed light on everything, since it seems like the agents don't want us to know their secrets either.

Nobody has a conclusive answer on when the new agent is going to be released, but we can speculate around dates from previous agent releases. There is a3-month time span between Asta's and KAY/O's releasedate, whileplayers had to wait 5 months for Chamberto release.Neon's release date was shortly after Chamber– fans only had to wait two months.

Judging by that, we can predict that the next agent will be released within 3-6 months after Neon. Although this is left only to speculation, it'll take some time before we see the new Valorant agent.

Imaginary agents, likeNora, have previously tricked us into thinking anyone can be the new agent! But this time, things have gotten more serious. What's next for new characters in Valorant? Only time can tell.