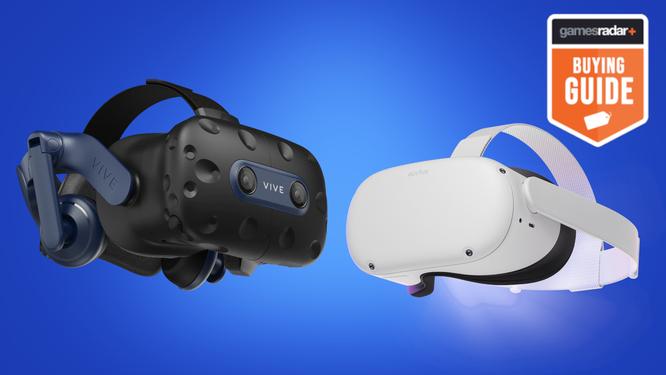 The best VR headset in 2022: all the latest devices compared

The best VR headsets are under the microscope now more than ever. Now that virtual reality looks set to finally make its way to the mainstream, with companies like Meta and Sony placing heavy bets on its future, more and more of us are diving into this kit. Thankfully, we've already got plenty of models to choose from, but working out which is the best VR headset for you isn't always quite so simple.

There's a whole range of headwear looking to compete right now, from budget smartphone buys to high-end, bank-busting systems. Not only are there new brands and model names emerging left and right, though, but a lot of the technology they're using to market themselves feels brand new to the uninitiated. That's why we're explaining all here, showing you all the best VR headsets on the market right now, and rounding up all the specs you should care about to get the best experience possible.

The Oculus Quest 2 is likely the most well-known VR headset on the market right now - and for good reason. The $299 / £299 device offers the best value on the shelves, with a cable-free headset (which can also be tethered to your PC for a performance boost) offering a massive collection of games and apps for a great price. Whether you're looking to dip your toe into the virtual reality waters, or you're a pro user looking for something a little cheaper, the Oculus Quest 2 is a go-to for an affordable, yet high-quality experience.

You're free to roam your surroundings with no limiting tracking area and a super flexible setup overall. This is an all-in-one self-contained unit with a speedy processor and plenty of RAM for today's games to boot. That means you won't need to invest in a high-end gaming PC to keep things running smoothly here - you're all good to go straight out of the box. And it's difficult to understate just how important that is to Oculus Quest 2's value.

With so many of the best VR headsets costing well over $500 / £500 (and still requiring a separate PC brain to function), packing the tracking features, high-resolution display, 90Hz framerate, and comfortable experience into a sub-$300 / £300 price point is incredibly impressive. We've even started seeing more and more Oculus Quest 2 deals entering the marketplace in recent months as well.

If you're after the best VR headset money can buy, we'd point in the direction of the HTC Vive Pro 2. This is certainly a big kids toy, coming in at $800 for the headset alone, without taking the extra required accessories and high-end PC into account. However, for specialists and budget-busting enthusiasts, the HTC Vive Pro 2's 4896 x 2448 resolution, pinpoint motion tracking, and Steam VR integrations make it a must-see.

That resolution sits at the very top of the current market, offering up super clean visuals that you won't find on cheaper headsets. You are tethered to a PC here, via a Link Box connection, which means the threat of tripping is real if you're up and about. 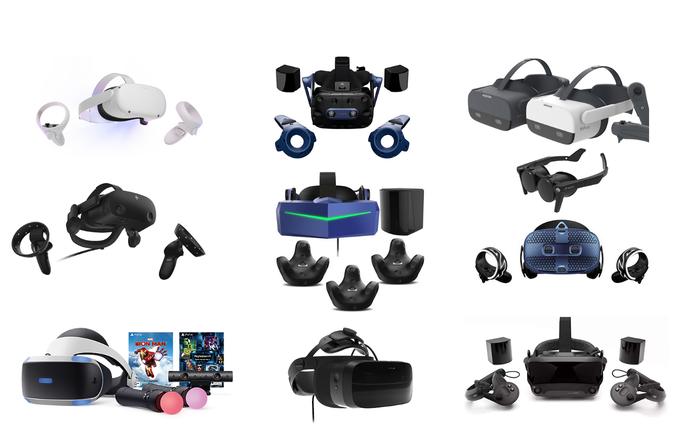 You'll need to pick up two Steam VR base stations and motion controllers for the full experience, which will set you back around $600 extra all in. However, once you do there's a new level of tracking and motion at your fingertips - one that other VR headsets can sometimes struggle to match unless doing so while sacrificing other features.

The main draw here is that incredible resolution, combined with the 120° field of view and refresh rate of up to 120Hz. If you're going all-in on a future-proofed setup, and want your games to look as good as they possibly can while doing so, this is where the piggy bank should go.

There are a few features of the Valve Index that we need to get out of the way right at the start. First up is that finger tracking system. Rather than relying on per-controller tracking, the Valve Index has stepped where no VR headset has gone before - adding sensors for each individual finger via a touch-sensitive panel. The second is a 120Hz refresh rate that will cover for a slightly lower resolution by allowing games to slide across the screen without a hint of a flicker.

The Valve Index is a VR headset for those fully invested in the PC gaming space, the specialists that already have the PC humming away in the corner and are looking to put it to the test. While the headset itself costs £499 / £459, the full kit will set you back $999 / £919. That's cheaper than the full price of the HTC Vive Pro 2 and all of its gadgets, though you're favoring tracking over resolution this time.

With the whole of Steam behind it, you'd be hard-pressed to be bored in this particular virtual world. However, it is worth noting that fewer Steam titles can take full advantage of these unique tracking features so you're certainly proofing yourself rather than enjoying today's tech with this purchase.

If the HTC Vive Pro 2 was looking a little pricey, the Vive Cosmos Elite system might be the best VR headset for those looking to spend a little less on some of the fancier features and focus instead on room-scale tracking. HTC launched its Cosmos headset to very little fanfare a few years ago, and on its own, the headset sits as a fully modular system that you can upgrade with a different faceplate and SteamVR tracking bases as you please. However, its final form is the Vive Cosmos Elite, making this iteration the best VR headset in its line.

While resolution lacks behind the much cheaper Oculus Quest 2 (the full Cosmos Elite system will do over $800 worth of damage, there's enough power in that 2880 x 1700 display to keep up with the premium Valve Index system. That means no screen door effect and a clear display (supported by a 90Hz refresh rate). If you're after a full suite of tracking sensors, then, this is the most affordable option available to you right now - and it still does a solid job of rendering everything in high-quality graphics.

Not many have the HP Reverb G2 on their shopping list, but HP does have a sleeper hit on its hands with its $600 VR headset. It's worth noting that this is much easier to find in the US, and you'll likely be limited to special editions running over £1,000 if you're browsing in the UK. With heavy emphasis placed on resolution, but some nice quality of life features baked in (how has nobody else thought of having the display flip up so you can see your surroundings?) there's plenty to love here, even if overall this set doesn't quite beat out some of the higher options on the list.

You won't need any external tracking sensors here, the HP Reverb G2 takes care of all of that itself with cameras. Plus, there's very little setup to get out of the way. This is a Windows headset through and through, so connecting to your PC is as simple as plugging it in and letting Windows 10 or 11 complete your installations and software tweaks.

While tracking a little behind Oculus in its value offering, the HP Reverb G2 is a solid buy for any PC enthusiasts who don't want to have to kit out their home to step into a virtual world.

How to choose the best VR headset for you

Choosing the best VR headset for you will likely come down to your budget as the market is currently heavily segmented according to price. If cash is your only factor, you'll find a breakdown of the best VR headsets in each price range just below, but be aware that there's plenty more to this story if you're browsing above $600.

Beyond cash value, there are a number of features that separate budget, mid-range, and high-end headsets. Generally, these are screen resolution, panel type, field of view, and tracking support.

The best VR headset is generally the one with the biggest resolution. That's because resolution is such an important aspect of the virtual reality experience, and a high-quality display will remove the screen door effect and keep your games feeling fresh and immersive. If you're spending more than $600 on your headset, you'll want to make sure you're getting a resolution of above 3664 x 1920.

VR headsets are quickly adopting OLED displays moving forwards, thanks to the increased color contrast and vividity. If you want to remain on the cusp of emerging developments, then, it might be worth waiting for the perfect headset with an OLED panel (many of the best options today still use an LCD).

The average field of view among the best VR headsets is around 100 degrees, with variances running around 10 degrees either way. The higher the field of view, the more you're going to be able to see around you, and the better the headset will recreate natural human vision. If you're looking to use your VR headset for gaming, then, it's well worth making sure you're hitting at least 100-110°.

Cheaper VR headsets use onboard cameras to track their placement, and your heads, within a virtual world. However, moving up the price scale, more specialist devices often employ additional hardware like tracking bases to set up room-scale tracking with far greater accuracy. You can game on a headset with onboard tracking, and if you're simply looking for casual entertainment, we'd recommend sticking with this far more affordable solution. However, if you're splashing some cash, it's well worth investing in a rig that can accurately track your whole play space.

Even the best VR headsets won't be worth it for everyone - in fact, the very top of the range will likely only make sense for a small selection of people. However, now that developers have started producing more and more larger-scale games (Resident Evil, Half-Life, and Star Wars franchises all have recent releases) and those prices are starting to fall, it's well worth investing in a VR headset if you're keen on exploring a new avenue in gaming.

The best VR headset for the budget-minded is undoubtedly the Oculus Quest 2. Not only is it the cheapest device on our list, but it's rapidly grown its library and now houses a massive number of titles and Steam connections. That's perfect for those who want the best value right out of the gate, with plenty of titles to make good on that original $299 / £299 cost.

However, if you're after room-scale VR of a higher quality, the most cost-effective VR headset is the HTC Vive Cosmos Elite is your next step. At an MSRP of $899.99 / £899.99, this all-in-one bundle is the cheapest full-scale tracking solution available right now.

Many of the best gaming laptops are also VR-ready now, but if you're keeping your search strictly to headwear, check out our guide to PSVR vs HTC Vive vs Oculus for more buying advice.